The Wrong Kind of Beauty

By emphasizing makeup and style more than physical strength, USA gymnastics advertises the worst aspects of an incredible sport. 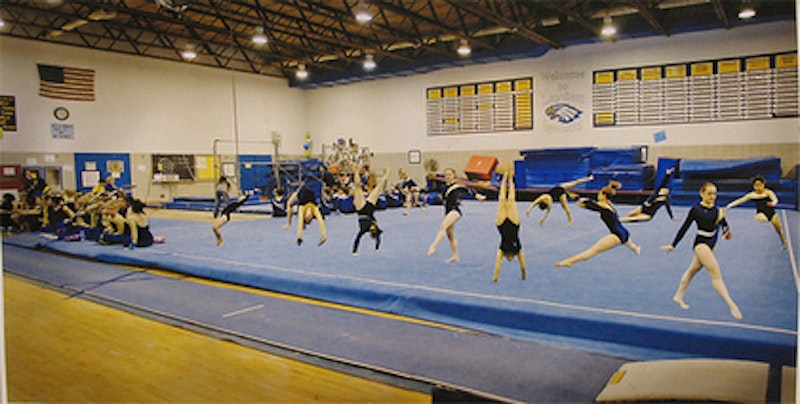 August is here, and if you watch NBC for more than 30 seconds, you know that means the Olympics are here with it. And for me, a former gymnast with an unrequited wish to be a commentator about the sport, the Olympics mean only one thing: leotards, and lots of them.

Growing up in Australia, gymnastics was my life for six years. It taught me focus and balance, and how to throw myself into or at something at high speed, with all my might and without hesitation or fear. It taught me how to fall and get up again. Unfortunately, it also taught me how to get injured, which I did, repeatedly, until there was no choice but to quit. Eight years on, I still love to watch gymnastics, and still find my muscles flexing and releasing as I watch and live vicariously though the gymnast who wobbles and struggles with all her might to stay on the balance beam.

So every four years when the Olympics roll around and a fresh crop of 16-year-olds in leotards grace our television screens, I sit down on the couch for hours at a time, watching routines, comparing teams and snapping at anyone who dares to disturb me. Today I went onto the website of USA Gymnastics to check the final roster for the women’s Olympic team, which was decided last week. I was pretty surprised to discover that the U.S. women’s Olympic gymnastics team is sponsored by CoverGirl cosmetics. The team’s three best and most photogenic members, Shawn Johnson, Nastia Liukin and Alicia Sacramone, are the new faces of the company, and USA Gymnastics is running a competition with a meet-and-greet with the gymnasts and a complete CoverGirl makeover as first prize.

Gymnastics is a sport that places enormous demands on its athletes. It demands strength, flexibility, speed, agility, grace and power. It demands that gymnasts throw themselves upside down, rotating and twisting, at once defying and depending on gravity. And if they don’t land with their feet stuck together, perfectly steady and without a step sideways, the judges take points off. Moreover, female gymnasts, if they are ever to reach Olympic standards, need to do so by a very young age, with 16 being the minimum age for the Games, and few gymnasts over 20 competing at world standard. As a result, gymnasts hoping to achieve that standard train for hours a day from before their teenage years and often move away from home to live with their coaches and teammates.

In recent years, the level of difficulty in women’s gymnastics has skyrocketed, and so too has the amount of makeup. The U.S. team, like many others, has begun to coif and buff its gymnasts so that close-ups of their faces as they prepare to dismount the beam show not only their concentration and determination, but also their perfectly applied eye shadow and long, mascara-coated lashes. This practice is not entirely surprising, and gymnastics is certainly not the first sport to do it. Recent attempts to doll-up WNBA players and sex-up other women athletes have garnered press attention, and the reactions of the general public and the sporting community have been mixed.

The fact that the team is now not only beautified, but also sponsored by a cosmetics brand, is no surprise either. The rise of tweens as a major consumer group means that girls like Johnson (16), Liukin (18) and Sacramone (20)—pretty, talented and slightly older than the tweens who aspire to be like them—are the Hannah Montanas of the sporting world. Making them, and the rest of the Olympic gymnastics team, a little easier on the eye this August will surely benefit the bottom lines of NBC, USA Gymnastics and now CoverGirl.

So I guess I shouldn’t have been surprised upon arriving at the USGA website, but it was disappointing. Gymnastics, at its core, is not about beauty—at least, not beauty in the CoverGirl sense of the word. It can be beautiful to watch, and it requires grace and elegance, but at it’s about raw power, explosive strength and remarkable discipline. Is it not enough that women like Johnson, Liukin and Sacramone possess all these in spades? These women and the other six gymnasts going with them to Beijing have spent their lives missing school and family holidays and birthday parties to practice so that they could one day represent their country at the Olympics. They’ve torn ligaments, broken bones and herniated discs to reach this level of competition. Liukin and Sacramone are almost guaranteed medals and Johnson, the reigning world champ, is a safe bet for individual all-around gold. And yet, their faces will not appear on television or on the competition floor this August without first being coated with makeup. (Johnson and Liukin also have valuable endorsement deals with a number of other companies, including Coke, McDonald’s, Adidas and Visa, but the CoverGirl deal is unique in that the makeup is the only product that the gymnasts will promote by wearing during competition.)

The message this sends to young women, aspiring athletes or otherwise, is a worrying one: “Your talent, your determination and your success matter, but your beauty matters more.” Even though these girls are now completing stunts so difficult that they were once considered impossible for women to even attempt, endorsing and being sponsored by a cosmetic company says that no matter what she accomplishes, a woman is little more than a pretty face. Johnson, Liukin and Sacramone, as their membership on the Olympic team demonstrates, are so much more than that. So are thousands of young gymnasts across the country who will be watching them this August.