Why Don't More People Use the Female Condom?

They increase women's sexual enjoyment and put the method of contraception in their hands, so why don't we educate more people about them? 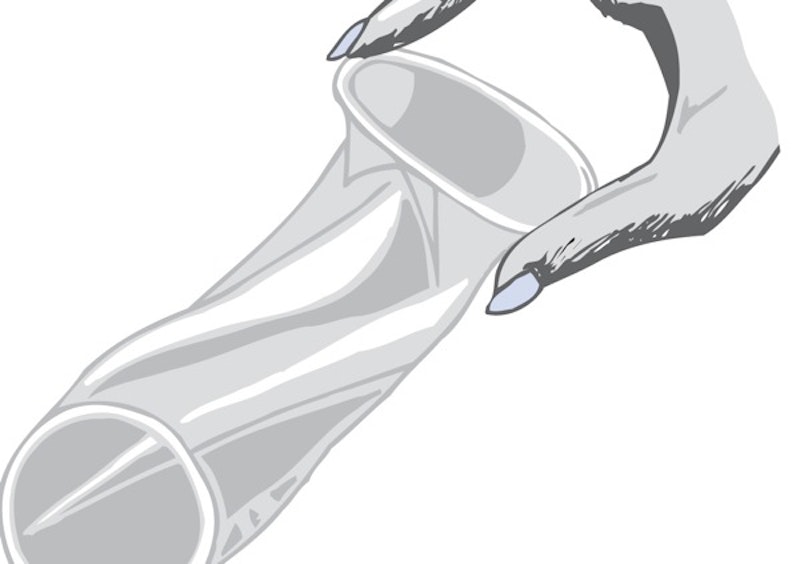 “Here, have some female condoms,” my friend Whitney said as she tossed a few plastic packages at me, and a few more into her suitcase.

Despite appearances, Whitney is not going on vacation. She’s headed to Lesotho, in southern Africa, where she’ll be spending a year working at the Baylor Pediatric Aids Institute. And the female condoms were souvenirs from her last trip to the region, where she was observing community health workers at sexual health clinics in Cape Town.

Her sister Jamie and I sat on the bed, inspecting the packets as Whitney folded her clothes. If you haven’t seen a female condom before, it’s about twice the size as a regular condom and has the same ring at the bottom. Unlike a regular condom, however, it’s packaged unrolled, and it has another ring at the top to assist with insertion.

If you haven’t seen a female condom before, I’m not entirely surprised. As Jamie and I sat there, looking at the packets and the accompanying diagrams and instructions, we were suddenly giggly and nervous, just as we were in high school Sex Ed class and we first came into contact with Trojans. Wondering why we were so uncomfortable, I suddenly realized that our awkwardness and curiosity were understandable, since, at 19 and 21 respectively, Jamie and I were looking at the first female condoms we’d ever seen.

It’s not that we had inadequate sex education. On the contrary; my Sex Ed teacher used to have her students race against each other to see who could put a condom onto a banana the fastest. But for some reason, female condoms were barely discussed. They were mentioned in passing, along with dental dams and IUDs, but were dismissed because, like dental dams and IUDs, they’re not commonly available and not commonly used by teenagers.

Of course, this is a self-fulfilling prophecy—without education about female condoms, there will continue to be low demand and low supply. And despite the minimal coverage of female condoms in our schools, Jamie and I were lucky to have heard them mentioned at all. A large proportion of American high school students don’t receive sex education that provides them with accurate information about condoms of any kind.

But as we looked at the packages and giggled, awkward and uncomfortable, I had to wonder: why aren’t female condoms more popular than they are?

Where Whitney is going, the advantages of female condoms are clear. In societies where women are often not in the position to demand that their male sexual partners wear condoms, female condoms are a way for women to exert some control over their sexual and reproductive health. There is still some resistance, Among American men, to wearing condoms, but given the more equal status of women in American culture, American women are more likely to be comfortable insisting that their partners wrap it up.

In fact, perhaps that’s why they get so little press. Perhaps it’s because female condoms take the decision to wear a condom out of men’s hands and put women in control of the situation that they are infrequently mentioned and far more expensive. Perhaps it’s because their effectiveness is not dependent on men’s arousal, and because they may even increase women’s arousal, that there’s so little market for them. Do I think there’s a nationwide condom-pricing-and-education conspiracy designed to keep women down? No, but it does strike me as odd, in an age when advertisers use the word “empowering” to describe everything from cleaning products to the Pussy Cat Dolls, that a genuinely empowering product receives so little press.

A glance at the statistics suggests that male condoms are a safer bet; they’re cheaper and they’re better protection against pregnancy. But a quick glance at the number of my otherwise intelligent friends who have had drunken, unprotected sex suggests that when it comes to contraception, people often don’t think or act rationally.