The Semiotics of Bar Stamps

Where you been, where you going. 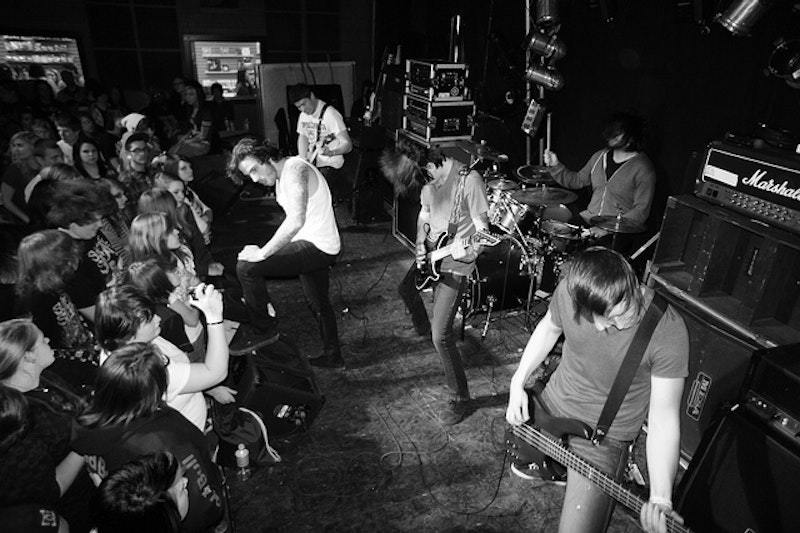 Where do you go when you go out? Sometimes you don’t even have to say anything; it’s all on your hand. There’s something I enjoy about returning home on the subway after a night of drinking and dancing. It’s comforting to walk onto a subway platform at four in the morning and see a bevy of students, scenesters, and soused singles trying to find their way home.

One night, on a local train headed to my neighborhood, I noticed an exchange between two strangers. “Where are you guys coming from,” said a twentysomething to a group of inebriated, clearly underage, Long Islanders. “Webster Hall,” a wobbling blonde slurred, wearing a tattered tank top, jeans and patent leather heels. “Of course, look at the Sharpie X on your hands!”

Naturally, I glanced over to check it out myself. The group of kids, falling on top of each other—one even had to curl up in a corner to vomit a night’s worth of binge drinking—all had a big black X drawn on the back of their left hands. I mean, who really cares, right? But the dude who made the announcement continued to hound the girl and her friends. He cackled, pointed and insulted them. Why?

All the various people sharing the car with me that night had some sort of markings, myself included. We all had gone out somewhere, had our fun (or not) and were trying to get to bed. “Well where did you go,” the blonde retorted. “Le Bain,” the dude replied, apparently proud of his response.

What differentiates the red rhombus-shaped stamp of Le Bain from the black makeshift stamp of Webster Hall? If one is better than the other, then how about other variations of bar stamping? What would a layering of different stamps on one hand reveal about the person wearing them? Does a stamp on the inside of your wrist make you more hip than one on the back of your hand?

I realized that these markings could stand for something larger. They’re badges that you collect like a Boy Scout and symbols of your nighttime (mis)adventures. So, a stamp suggests more than just a patron’s entry into the bar or club. Someone who sees you with a mark on your hand knows that you like to party, that you may or may not have gotten drunk, and that you have a story. You may be judged by what you have on your hand, like the chick on the subway. You may be revered because you were able to get in that bar. In any case, the stamp is a status symbol of sorts, underlining your nightlife prowess… or lack thereof.

Even on a more intimate level, the markings on your hand hold a personal story of your night out. I needed to scrub feverishly at my hand one morning to wash away any evidence of the previous night. The faint worn mark was not just an inconsequential insignia of a bar. It screamed the bad decisions of that night—a night of poorly chosen acts of a drunken libertine. Because of what happened, that little stamp transmogrified into a parasite, feeding off my shame; it had to be removed.

On the other hand, my friend who recently saw The Drums in concert won’t want to lose the proof that she was at this lounge, two feet away from her favorite band. A silly “Void” stamp had anything but empty connotations. It symbolized a night where she got a chance to enjoy the band she loved. Photographs and videos could have documented that same experience. But a stamp would perhaps be one of the only corporeal traces of that night out. It’s a souvenir that is tacked onto your body.

What will you think of that temporary ink on your hand when you wake up in the morning? Will you cringe or smile? It’s really whatever you make of the night that informs the semiotics of bar/clubs stamps. I say, go out, have fun, and try not to fuck up.