The Lego Store Is A Joke In Your Town 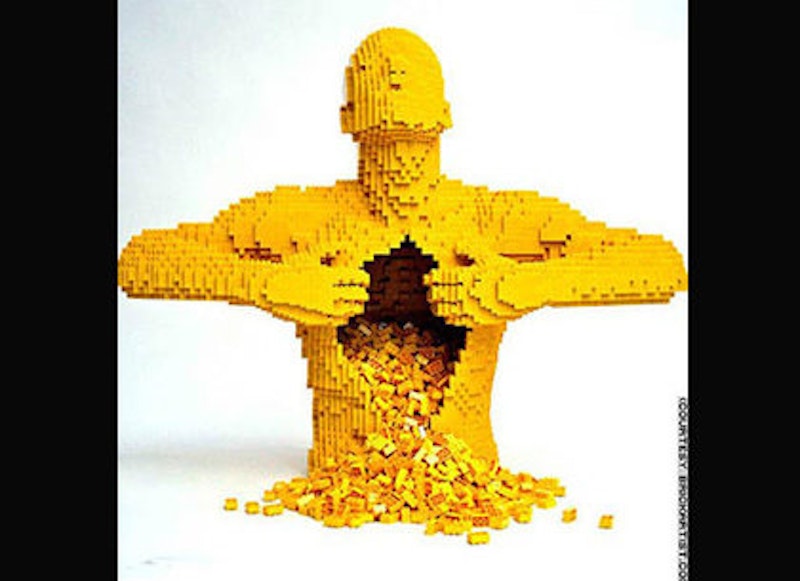 First, what is a store? A store is a place, corporeal or less so, where consumers may acquire various goods in exchange for money. Second, what is a brand-named store? A brand-name store is a place, corporeal or less so, where consumers may acquire various brand-name goods in exchange for money. The average Wal-Mart dedicates one side of a long aisle to Lego sets, Lego accessories, mystery packs of Lego figurines, and those oversized generic Lego heads where, one supposes, children who possess an overabundance of Lego swag stash that swag when it’s time for sleep, meals, or carpel-tunnel inducing Wii-controller throttling. It’s an impressive but disappointingly cynical display, catering to whatever tyke-set meme’s trending at the moment while servicing the closeted kidult contingent—you know, those dudes who couldn’t roll with the last 20 or so issues of Hate because it maybe hit a little too close to home. Whether you’re in that particular closet or are loitering just outside, if you grew up slap-snapping flat plastic blocks together to build impossibly huge walls or fortresses or moon-bases or assault vehicles, the phrases “Lego Store” and “Lego World” should inspire some sort of private internal meltdown. I mean, you know, imagine: walls and walls, from floor to ceiling, stacked all things Lego.

It falls within reason that visiting a Lego-branded space should be exactly like going to a candy emporium or the Apple Store: all the colors of the rainbow, worlds of connectible discovery available for all to fondle, a dude in a Lego-ized Indiana Jones costume high-fiving you en route to the cash register. But the sad truth is that Lego-branded spaces aren’t much different than the Lego areas in department stores. Lego stores carry the sets everybody carries—Transformers, Ninjago, Star Wars, and its “City” series—plus some girl-centered sets and products for those who want to build Lego replicas of the Space Shuttle or the White House and key chains of popular figurines and bins of blocks and pieces for sale in eye-popping oranges and reds and blues. But man, this is a Lego Store. That’s not enough.

On a good day, you might luck into an outlier, like a set that celebrates D.C. or Marvel heroes in conjunction with movie franchises, or Lego’s eerie “Monster” series of dioramas; don’t hold your breath expecting to find related video games. In some of these stores, the creatively inclined can cobble together figures from a grab-trough of torsos and heads and legs and accessories. Lego World—my family recently visited one near the Dallas/Fort Worth area—marries a Lego Store to a variety of family-friendly attractions, like one where kids get to help “manufacture” Lego bricks and everyone piles into a ride and zaps baddies in the darkness with laser guns; there’s a 4D movie where the audience gets soaked, and a site where everyone and build and race Lego mobiles. You know those huge gumball machines full of gumballs? Well, Lego World has humongous pillars like that, full of millions of Lego bricks, which is somehow redolent of whimsy and a ballsy display of corporate might at the same time. There are also Lego bricks here and there bigger than your cousin’s Vespa.

And, you know, all of that was a lot of fun, and my son thanked us about 1000 times, but none of this makes up for the fact that if you name a store after your brand, your store should be huge and endless and awesome. Whether you’re five or 50, you should go to that store and come away bragging to everybody that you were there, and that there was almost too much to take in. That store should be beyond belief; it should be possible to get lost in there. Brand-theme stores should not be airy and reasonably laid out and “open concept.” You should not come back from visiting that store without a t-shirt because there were almost no t-shirts to buy. Your son shouldn’t have to go to the games shop in another part of the mall where Lego World is because that games shop has an Avengers-tie in Lego set that Lego World couldn’t bother to stock. And I’m reading your mind: the even-handed rebuttal insists that we’re living in a post-bricks ’n’ mortar world, that the real action’s permanently online. I’d like to call bullshit on this mindset, and demand that business return to the imperative that more—too much, even—is better. That the masses want to be dazzled by clutter and buried in heaps of quickly dated pop-culture junk and harassed by inquisitive clerks bustling by, arms loaded with more and more merchandise.

Whatever happened to unzipping and whipping it out in front of the buyer in a way that implied, if not lovingly, the symbiosis between shopper and business? Whatever happened to the shrill, yearning howl of in-person commercial-industrial complex dissonance?