Soundgarden Slink Back Into View With a Whimper

Why “Live To Rise” is the anti-“Black Hole Sun.” 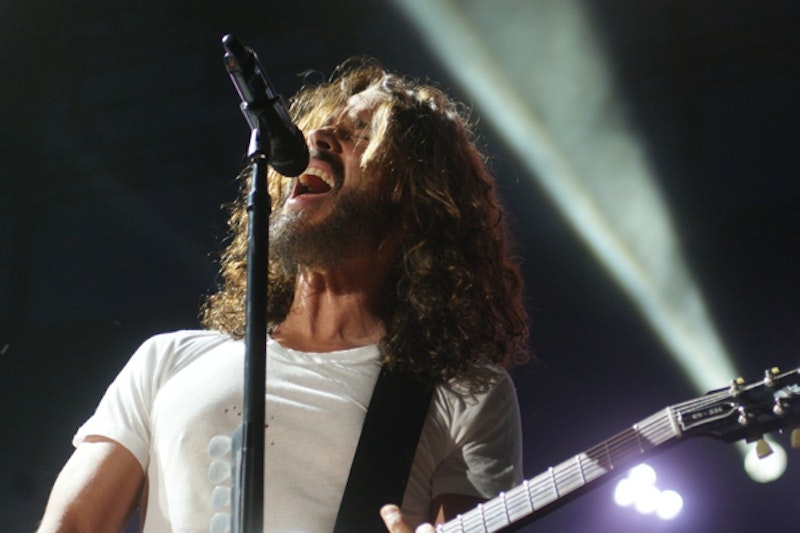 The anthropomorphic Christ-like deity at the core of C.S. Lewis’ Chronicles of Narnia series is Aslan: a benevolent, ferociously god figure with a roar as mighty and wild as the pads of his paws are soft. Awe, fear, and paternalism rolled into a furry, maned MacGuffin—was he real, was he myth, was he fantasy—this literary creature stoked the imagination of many a wide-eyed, grade-school daydreamer.

For much of the 1990s, one could have subbed in "Chris Cornell" for “Aslan” in the paragraph above with only mild irony. Soundgarden’s majesty was never attributable to Cornell alone, credit Kim Thayil’s freaky guitar dexterity and the formidable rhythm-section roil of bassist Ben Shepherd and drummer Matt Cameron, as well, the alt-rock pinup was capable of summoning a ear-pricking roar, a primal call-to-attention that could put songs like “Pretty Noose” or “Limo Wreck” or “Jesus Christ Pose” over the hump that separates flashy hasher bullshit from youth-defining milestone. To carry the metaphor further, at their best, Soundgarden sounded wild, if not rabid.

Yoked to the forthcoming Avengers movie, “Live to Rise” is the first new Soundgarden single since the band’s less-than-amicable split in 1997. But “Rise” is housebroken; it is tame. It is Soundgarden-lite, diet Soundgarden, neutered Soundgarden. And when I say this, I’m not picking up on the startlingly topical lyricism, which is a Marvel Studios executive’s gimme-qua-wet-dream; the problem is almost everything else. Most of the song suggests a tranquilized Smashing Pumpkins covering “Spoonman” circa 1999: to add insult to injury, the recycled melody’s played arrow-straight and pitched at a just-ahead-of-mid-tempo pace, a patina of echo limning the sound to make it all sound more epic than it actually is. Worse, the bass line doesn’t improve on the melody. Worse still, and crucially, Cornell can’t get it up; studio smoke and mirrors are called upon to engorge and distort his wasted (or half-assed) pipes so transparently that it’s embarrassing. And then, as if Soundgarden are somehow intuiting the listener’s disappointment, the guitars gear-shift into flashy hasher bullshit hyperdrive in the last minute and change, “Rise” finally ejaculating and fading into silence.

Nothing about this song is even remotely exciting; there isn’t a second where these four sound like anything more than a corporate chess piece sliding from one square to another. Think of “Rise” as the anti-“Black Hole Sun”—the polar opposite of manic melisma, alchemic fretwork, and unfuckwithable musical chemistry: Aslan declawed and shackled in a dungeon.