Mr. Wrong: All The News That's Fit to Skim

In which our news junkie columnist looks at humans who breed like rabbits, and monkeys who kill like humans. 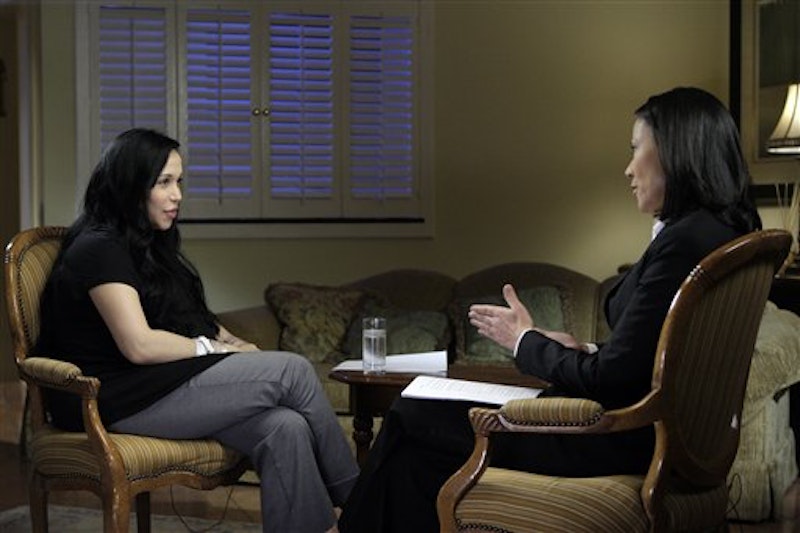 Wow, seriously, there has been so much fucking news lately, man, it’s like, first of all, OCTO-MOM, man, how fucking wacky is she, eh? OCTO-MOM! Goddamn, I’m only here every other week, so you hadda hear about this already, right? She got all test-tube/in vitro’d or whatever and ended up with eight babies all at once, and as we all know, eight is enough, yes?

I got so caught up in OCTO-MOM I ended up with a song about it in my head, but I kept getting the old SPIDER-MAN™ cartoon song in there too, for the music, and the words really didn’t ever shape up:

No complimentary diapers for the lady

It’s like, the involuntary song in my head kept trying to rhyme bomb (pronounced, like, “bom” all phonics-like) with “womb,” which supposedly should be said as “/wum/”, or “woom” if you will, but if you were gonna go with "wombat" that’d work because somehow the “womb” part gets magically changed to “whahhm-baaht,” so if you were gonna use it in the rhyme, it would work, but then it would have to get hyphenated or something:

And then it just makes even less fucking sense. It’s kind of a mess inside my skull with stuff like that lying around. I have a lot of respect for people who write songs, man, I mean, I couldn’t even let one happen in my head about OCTO-MOM, you know?

What’s her game is it fame

Or is she just really fucking creepy

because people all say she wants to look like Angelina Jolie . . .

OK, that last part doesn’t work very well either, so I’ll stop, I apologize, really, but it’s like, the only thing worse than some crappy song you get stuck in your head is an even crappier song that comes outta your own head, OK? My brain is my enemy, and I’m outnumbered. Especially when all that’s in there is OCTO-MOM, jeez, but what am I supposed to think about, the Automobile Industry? I went to the car show last weekend and it sucked! There were no Exciting Cars Of The Future, just a whole bunch of depressed-looking guys in shirtsleeves and neckties who would normally be humping people’s legs with information about the new Pontiac G3! Kinda hard to get excited about that, I know. Or wait, am I supposed to think about the Stock Market? How many times can it crash? When does it go to Zero, what happens then? Can I just plan for fucking Zero? Where are the financial advisors who can show me how to deal with the Zero Economy? There’s too much goddamn News, man, I can’t take it!

So look, back in the News-I-Can-Almost-Handle-Without-Wanting-To-Eat-My-Luger Department, there was also a fucking MONKEY ATTACK! Jesus Christ, what a nightmare, seriously, you can start with the fact that people should not be allowed to keep monkeys as pets, OK? Maybe Sea Monkeys, but that’s it. It’s like, I’m not exactly a member of the PETA or anything, I mean, I enjoy to eat bacon and stuff, you know, but goddamn fucking chimpanzees are vicious beasts that need to be out in the wild, not live as a “pet” or “member of the family” running around in a diaper all zooted on Xanax, you know? Man, that was horrible. I don’t know what I would do if I was attacked by a monkey. And that fucker was some kinda serious Hardcore Gangster Monkey, you know? The police manage to blast his ass only after he busts into the cop car? Wow. People need to learn from this poor creature’s end and Respect, you know? I can’t even think about that poor lady who got attacked, jeez, and then somehow that whole mess ends up getting dragged into this tasteless fucking cartoon in the New York Post? Nice going, New York Post. A human being gets maimed, and you idiots make a joke out of it, and you guys are so fucking tone-deaf that the racism aspect almost isn’t even the issue, I mean, we spent the last eight years making fun of George W. Bush 43 because he looked like a monkey. Eight was enough of that, too, eh?