Missile attack the moon while filling out an Oscar ballot. Watch out for hot slag. From the Baltimore City Paper. 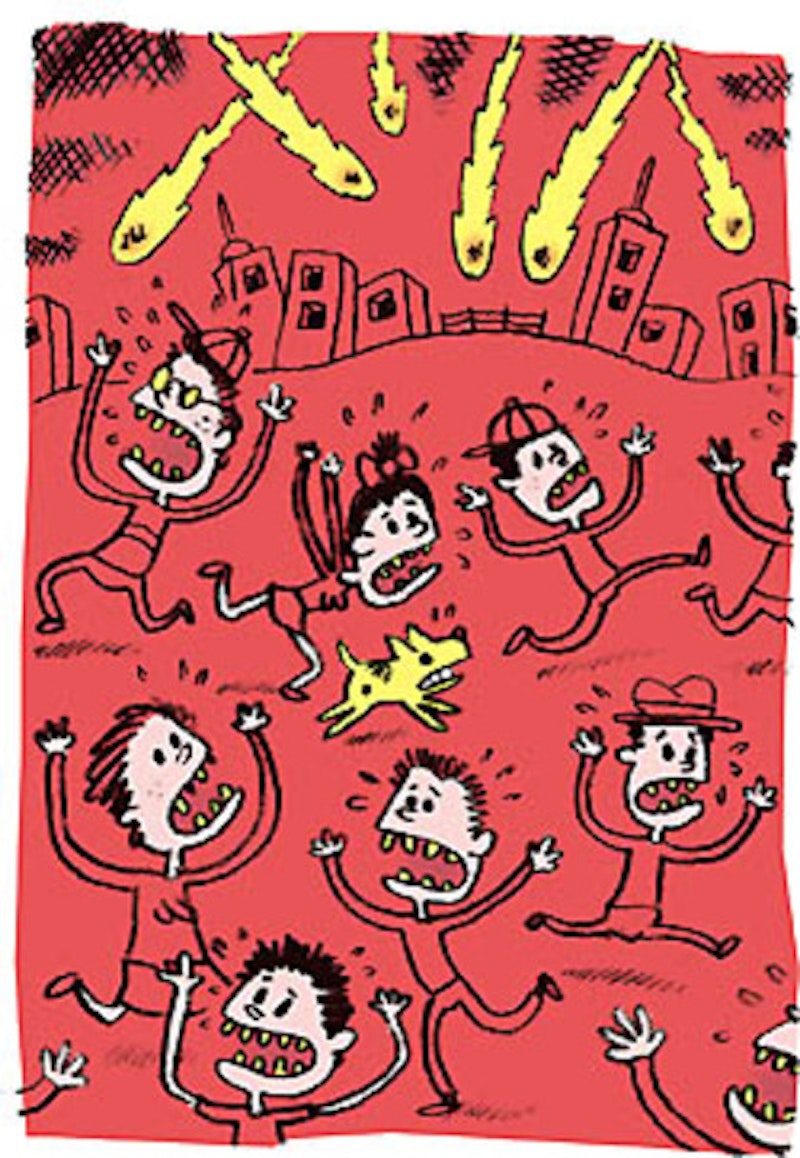 Wowee, I sure am glad they (as in Us) shot down that top-secret military spy satellite. I kept driving around town all last week waiting for chunks of hot satellite to bonk me on the head, or to get rained on with some nuclear-atomic carcinogenic-chemical Death-Plus satellite-juice or whatever that "hydrazine" shit was inside the thing that made it so Bad.

Anyway, They said they shot that shit down, right? Them? Yes? I mean, what the hell we got all these king missiles and Star Wars Defense and missile-anti-missile-missiles for, huh? It woulda looked pretty bad for us (as in U.S.) to take a shot at that fucker and miss, eh? On account of it is Ours, as in We the People, no? Plus, I mean, This Just In: We're getting attacked by our own shit! Aiiieee! Has anybody written their congressman about that? C'mon, what the hell do I pay taxes for if the Big Military Operation of the Week is Operation: Holy Fucking Crap We Need to Blow Up Our Own Fucking Shit Before It Re-enters the Earth's Atmosphere and Kills Us? Like, even if it did have some top-secret experimental-kinda Robot Spy-Brain, it's not The Enemy or whatever, as in trying to Kill Us, it's just this junk-satellite that never worked in the first place falling down on the People of Earth, you know? That is, of course, if it was ever really coming down, right? As in, if it was ever Up There in the first place, hmm? Yeah? Huh?

I watched the thing on the internet from The Government--or The Military, take your pick--showing this rocket-launch-looking night-vision screen, and then there's a big bright poof and errbody's all High Degree of Confidence in Mission Accomplished, but even if it did get exploded, there's gonna be a whole buncha people who won't believe any of it. I know people who think all that stuff about how The United States of America sent a rocket to the Moon and had guys walking around on it--the Moon, I mean--is all a big setup, fake, like in the Major Motion Picture Capricorn One or whatever, where they (as in us) pretended to go to Mars because they had a problem with the budget or something, starring Elliott Gould, O.J. Simpson, and Telly Savalas. You can't make that shit up.

And speaking of Fraud and shit exploding, I really sucked it in my Academy Awards pool. Jeepers, I coulda made better picks waiting for teensy pieces of burning-hot satellite to blaze little marks next to the selections for Best Costume and Best Supporting Actress, for chrissakes. Who the fuck had any dough on that nutty French chick to win?

But look, we (as in U.S.) gotta get our shit together and get our asses back up to the Moon, or up to the Moon for the First Time Ever, if that's how you bet, because all of a sudden the Chinese and the Russians are talking about going to the Moon, and fucking Google, for fuck's sake--goddamn fucking Google, which is basically like, no offense, a fucking Web Site--they're having this contest for people who wanna go. Meanwhile, back on Earth, The United States of America is busy taking shots at giant flaming fireballs of Bad Satellite that aren't going anywhere near the Earth's only natural-born satellite. If Google called me up and told me it shot the Bad Satellite down, I would totally believe it and click on that shit.

I learned all about the Moon on my teevee: It's this element or isotope or something called Helium-3, man, that's why the Chinese and the Russkies are going to the moon. Helium-3! It's supposed to be this stuff you can use to do Atomic Power, but it works better than the shit they use now as far as, I dunno, the Radiation or whatever, and we (as in U.S.) coulda had fucking casinos up there by now, on the goddamn Moon, with slot machines and whatever, and cornered the market on that Helium-3 shit! Strip-mining the moon! Hey, as far as I'm concerned, that's fine, but only if they do it on the Dark Side of the Moon, because I kinda like the way the Front Side of the Moon looks now, you know? Although, maybe if McDonald's or Coca-Cola wanted to, they could figure out a way to get somebody to strip-mine their logo on the Moon, in exchange for paying for the rocket ship? For like the good of all Humans on Earth or something?

So look, we totally gotta get to all that Helium-3, man, and All Our Problems Are Over, for real, because if we get this Helium-3, we're supposed to end up with a kabillion times more Energy or something--sorry, you can look it up on the internet, the facts or whatever, I didn't really pay attention to that whole teevee show about the Moon because I was flipping back and forth to the TV Guide channel, because it was doing a breakdown of the new contestants for America's Next Top Model, and I'm winning that pool this time, goddamnit.

Image from Smell of Steve, Inc.