Look at that Punking Blipster 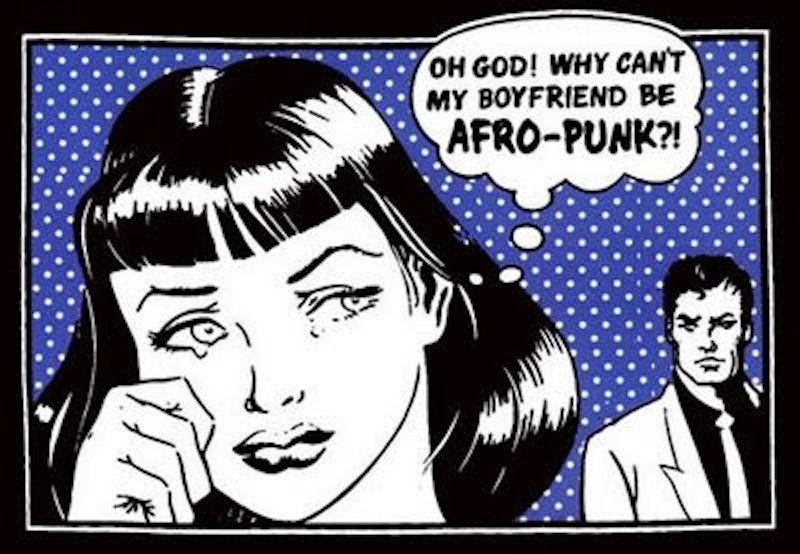 In 2007 The New York Times tried really hard to make the term “blipster” happen. A “blipster,” the paper discovered, was a black fan of indie rock. Get it? A “bl(ack)” “(h)ipster”! I like to make fun of the Times when it tries to “discover” things that the rest of us already know/have known forever, but obviously those things don’t become a real thing until the Times swoops in and says it is. I’m thinking of that exposé the paper published this past July that was about the opening of the Wythe Hotel in Williamsburg, Brooklyn, and how Wythe Ave. has become the newest, poppinest drag in North Brooklyn. But everybody knew that already!

Whatever we agree to call them, blipsters are the folks who have that impossible sense of cool, people like Jimi Hendrix and James Brown or Pam Grier and Kanye, who use style to make a place for themselves. The cool of black style was crystal clear last weekend at the Afro Punk Fest in Brooklyn, a two-day free “punk” festival/flea market type of thing where vendors and hot alternative acts like Janelle Monáe and Das Racist perform—FOR FREE—for blipsters all over the city. I discovered Afro Punk a couple of years back on a social networking site where black punks and skate kids could meet one another for friendship, hooking up, and more. You could share your taste in bands, you could show off your style, and meet people who are just like you. This is important because when you’re a black alterna-kid—just to avoid using that fucking word hipster—you’re often the only one, or at least that’s what it feels like, anyway. Black kids don’t skateboard. Black kids don’t listen to MGMT or Tanlines. Matter of fact, black kids aren’t supposed to even make indie music, never mind headlining acts like Das Racist, Bloc Party, Santigold, TV on the Radio, and on and on.

My friend Jean had just come back from a road trip and was looking for cool things to do in NYC while he was in town, and I told him we had to check out the Afro Punk festival. Last year’s blipsterpalooza, which promised to deliver us Santigold and Cee Lo Green, got cancelled because of Hurricane Irene, so this year everyone would come out in droves. As we got closer to Commodore Berry Park in Fort Greene, Brooklyn, which we knew we were near but couldn’t exactly find, this tall, beautiful black guy emerged. He was wearing a ladies blouse and shorts that you could barely see. He wore dozens of bangles and a flower in his hair.

“Are ya’ll looking for Afro Punk, too?” he says.

“Yeah. I’m like, can I get a sign? An arrow? Something that points in the general vicinity of the place?” I’m saying.

“You guys look cool” the flower child says. No, you look cool, Jean and I say practically in unison.

Finally the music gets louder and I start seeing black skateboarders popping up and down a sloped ramp. Hundreds of single-speed bicycles suddenly appeared and are affixed to the gate surrounding the park. The park itself was packed, and there must’ve been an additional 300 people waiting in line to get inside. Of course because there was no organization, which would be so anti-Punk if there were any, we just forced our way in front of all the line waiting rule-followers.

Once inside, the situation was beautiful beyond words. Afro Punk may not be as punk as hardcore punk enthusiasts want it to be, but that shouldn’t take away from the proliferation and of black style that was on display. I saw so many beautiful brown bodies with punk interpretations of Afros, any number of tattoos, buzzed sides and ombre dip-dyed hair color. Let’s just say that right now, since I live primarily in Richmond, Virginia, I might be the only black guy with “Skrillex Hair,” but that style was de rigueur at Afro Punk. There were black alterna-kids from every age group—from high schoolers to women in their 60s with fabulously dreaded “Skrillex Hair.” Interesting piercings, afro-centric head wrapping—the whole thing.

It was inspiring to see so many kinds of black looks that were basically within the same stylistic language—the language of black edge, of black counter culture. In that space everybody became a mirror to everybody. Whoa, she dip dyed her hair like that. Wow, look at how he wore that piece. It was like going grocery shopping for your next look.

The importance of style is not in how original it is, because style promotes sameness and difference in one swoop. What matters is how you communicate that individuality and what that says to other people. Style creates community, where people with like interests and beliefs and perspectives communicate those beliefs non-verbally.

So just when you think you’re the only Afro-Punk in the room, feel good knowing that there is at least one other person out there who has your exact haircut with the same iTunes playlist as you.