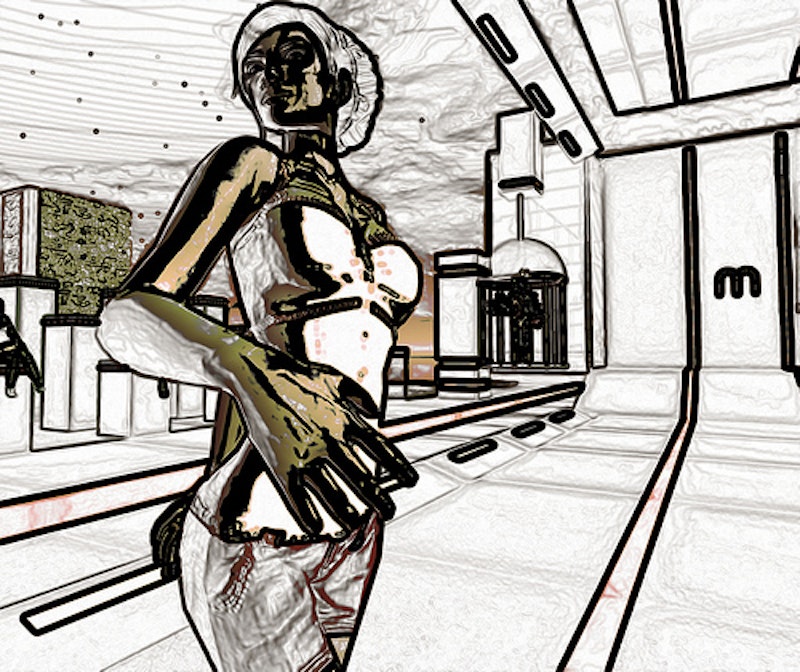 1) An overwhelming use of black (a cloud of total darkness, to use my fave metaphor).

2) Voluminous, amorphous and formless shapes (Is it a skirt? A man-dress? A cloak?).

I’ve always been drawn to the idea that so many high fashion collections are unisex, even if that isn’t the designer’s full-on philosophy. Less interesting, to me anyway, is that women wear unisex pieces or clothes designed for men. Not to be flippant, but I think the men who wear and get away with unisex high fashion are fascinating. And come to think of it, most every man’s high fashion collection has elements of androgyny and gender bending in it. Why?

In his red-hot days at Dior Homme, Hedi Slimane put men in pants so tight they looked like leggings. He made them wear silver, gold, and patent leather boots with a three-inch Cuban heel, and shirts so long they looked like dresses. Fieeeeeeerrrrce! Yves Saint Laurent wants men to wear high-heeled boots. Rad Hourani, my new BFF and current favorite menswear designer, designed a pair of boots with a six-inch heel, and so did Rick Owens.

Women regularly wear these labels, and with no qualms about it, either. But I want to know about the men who sashay around in high-heeled boots! I want names and faces. Seriously, though—what makes it possible for them to get out of the gender game, to be sexy even as dudes in heels? And what’s the relationship between high fashion and androgyny, anyway?

First of all, what the hell is “high fashion”? Nobody talks about, like, “low fashion.” Well, the fashion world basically boils down to the commercial looks—Gap, Abercrombie, Old Navy, Kenneth Cole, the things that actually sell—while “high fashion” pieces, and they really are called “pieces,” to underscore their holiness, are usually more artistic, conceptual, experimental and expensive. You’re more likely to see a high fashion look in a fashion photo or in an ad campaign than on a mall billboard, although some stores like BeBe and Zara give the zest of high fashion at a mass-market price.

Being high fashion means to live as a picture, to be editorial. If you’re a dude and you roll around wearing a voluminous black cloak, patent leather pants, and six-inch high boots, people are gonna fuckin’ stare! Snap, picture taken. Or think of it this way: high fashion is the oh-so-fierce world we would live in if instead of a tax refund, people got free couture in the mail.

You could easily say that high fashion is androg’ because, well, gay dudes and women basically run the fashion industry. We. Are. The. World! If gays and women are true slaves to style, while straight dudes are content shopping at mall brands and being invisible—style-less—you could say that high fashion is directed toward fashion’s faithful audience who easily spreads its pocket book and helps Rad Hourani’s entire collection sell out in seconds.

If you said that, you wouldn’t be entirely wrong. I’d bet that a lot of the high fashionistas are queer, self included. But think about the avant-garde menswear in relationship to the dandy. There are so many histories of the 19th century dandy, including a new one about black dandies (wow) during the Harlem Renaissance that details how important fashion was for these men in creating their sense of self. Walter Benjamin and Charles Baudelaire both say that the dandy, cloaked as he is in all black, is somebody whose whole life is about living as an image. I would say that dandies are virtuosos of style. They wear their sickest, hottest looks and work the sidewalks in cities around the world because they feel at home in the crowd. See and be seen.

But not all dandies back then were gay—in fact, many of them were total womanizers! The whole point of dressing fierce was to get more women. Funny, huh? And I will be the first to tell you that most gay dudes are not down with the androg’ stuff. It scares them, because most still put masculinity on a pedestal. Ain’t nothin’ wrong with masculinity. But something tells me that the dudes wearing these high fashion pieces, if they are gay, are not doing it to get men. More and more gay men don’t want to be perceived—they wanna be totally normal. And the other gay dudes be like, well, if I wanted a girl I’d date a girl. I hate when I hear this.

Rad Hourani had this to say about his aesthetic: “My clothes […] are asexual aseasonal; they come from no place no time no tradition yet they could be home anywhere anytime. They exude a sense of discreet chic, the essence of timeless style drawn on a monochromatic and graphical canvas.” Is your head spinning? Maybe it’s the grad student nerd in me, but I am in love with the way he describes the collection. When you say something like “I am male” or “I am straight” you protect yourself from experimentation with other possibilities. You mark yourself as of a moment or idea.

High fashion is a protest. And maybe that’s what I like about it—that it totally forces us to rethink what’s acceptably masculine, where’s the line between masculine and feminine, normal and abnormal. Funny, though, that the only people who can get away with the experimentation have huge credit limits or a trust fund.

Or maybe they’re like me and are willing to pay their rent two months late to get a faaaaaaaabulous piece.