I have never spent so many hours in a club or had so much fun on a night out. Ever. 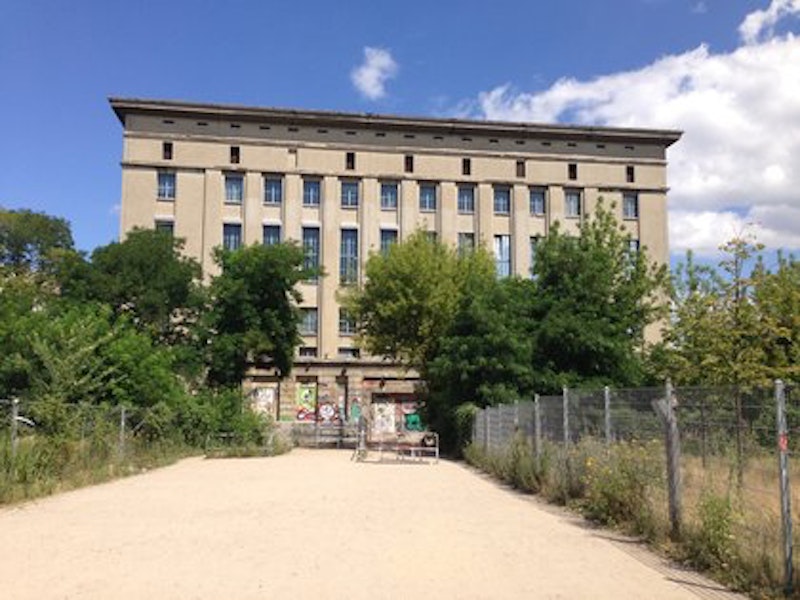 Last weekend I took a quick trip to Berlin, currently the global capital of creativity and youth culture. Twenty of the 36 hours I was in town I spent at a massive club in an old power plant called Berghain/Panorama Bar. Fuck. Just f-u-c-k. If you know anything about youth culture, nightlife or dance music, you know that right now Berghain is basically the epicenter of nightlife. I have never spent so many hours in a club or had so much fun on a night out. Ever.

I don’t want to reveal what goes on in the club, mostly because the secrecy surrounding the club is what keeps the myth of its awesomeness intact. The club succeeds is in creating a heightened sensorial experience at every level. So I will let you people imagine what/who I did or didn’t do/see there! All told, it was a completely mind-altering and life-changing experience for which I am extremely grateful. The irony might be that Berghain is kind of like a drug—I need another fix.

Ostel, the DDR-themed hostel where I stayed, was a stone’s throw away from the Ostbanhof train station and the East Side Gallery, one of the last remaining stretches of the Berlin Wall that is now covered in street art from artists all over the world. What I didn’t know until I got to the hostel, however, was that Berghain, named for its location in the East Berlin area of Friedrichshain and across from Kreuzberg, hence “berg-hain,” was literally a five-minute walk away. Oh lord. This was going be some weekend—provided I could even get into the club in the first place.

If you Google Berghain you’ll see that the thing most people talk about is how to get in. Berghain is known as much for hedonism, dark rooms, and hardcore dance music blasted on a superb Funktion-One sound system as it is for its extremely difficult door policy. More than one Berliner I met prefaced their love for Berghain by telling me how difficult it is to get into the club, that they know people who tried to get in three or four times and never made it, even offering advice that it’s better to go at this time rather than that time. On the Yelp page for the club, which I’m surprised even exists, those who’ve managed to make it in talked about what they thought the door policy was. There’s even a new Tumblr called I Was At Berghain, because what else would it be called, showing people leaving Berghain in broad daylight.

It’s two a.m. and I’m ready to go out. I’m so exhausted from traveling that I had dinner and took a brief disco nap so I would be ready to dance. In case I get rejected at the door to Berghain, I have a list of several other clubs like Watergate or ://about blank, where I was earlier in the afternoon. No big deal if I don’t get in, I’m telling myself.

The walk to the club from Ostel leads you through an abandoned industrial zone. I walk down a desolate street and the music from the club is already thumping at a low volume. Even at two a.m. the line to the get in is massive, sticking way out from the club for what seems like three miles, jutting away from the door like a giant tongue of eager bodies. I have never seen a line this long to get into a club. There are maybe 250 people in front of me, if not more, and that’s not including all the people who are now piling up behind me by the dozens.

Taxis abound. Independent vendors pop up and sell beer, cigarettes, candy and other drinks. Someone has their own boom box playing. People are speaking French, Italian and English.

The majority of people are getting turned away. The line moves fairly quickly, but that’s because nobody is going inside. When you approach the door and get rejected from the club for whatever reason, you walk back past the line of people. This can have certain disastrous effects on the ego, if you let it, but from a sociological perspective it’s really fascinating. Even in the line no one is talking about Snowden, international politics, or how wasted they are. They’re all talking about getting in, coming up with conspiracy theories about why certain people walking back past us didn’t get in, what they need to do to ensure they get in. I overhear one clever person describe the walk away from the door after getting rejected as a “walk of shame.”

I have never been so nervous in my life about getting into a club. When you enter the club you are searched for drugs, cameras, and you are warned not to take any pictures—not even with your cellphone camera, not even with the flash turned all the way off. If you do, you will get kicked out and banished from the club. I think you can take them at their word.

The reason the club works so well is not just because there are no Snooki’s and no fist pumping. It’s not because it has the right mix of people or even because the lines between what’s gay and what’s straight are completely blurred, as if something like “sexuality” mattered here in the first place. The club’s awesomeness is not even about how successfully the place plucks you from the real world and drops you into the fantasy or fantastical world of “Berghain.” That’s why there are no mirrors and no reflexive surfaces and no photography.

I’d say the club is so brilliant because of the way the dark and spacious sounds of dance music mirror the crisp industrial architecture of the place. Berghain is an extremely impressive minimalist, architectural masterpiece.

Once you get stamped and walk in, you’re immediately struck by the severity of the architecture. People are seated on the floor and on concrete slabs, taking a break from the music, fanning themselves off with flyers. As you move past the coat check, you enter a massive dimly lit room that feels like a warehouse or loft with a 60-foot high ceiling that you can barely see. Throughout the club giant slabs of concrete create spaces to sit, chill out, or to do “other” stuff. Everything is raw, concrete, and the original details of the old power plant have been left behind. In fact, the only colors in the club are, well, concrete, metal, a couple colored windows here and there, and whatever color lights are programmed with the music. There are no clocks and no windows on the Berghain dance floor, no mirrors anywhere.

If you go outside you’ll find an impeccably landscaped outdoor garden, where there is grass of course and even more concrete slabs to sit on. The best part, though, are the cars that have been reconfigured to create a smaller club space/dance floor. People are inside there dancing, too. To get to the main Berghain dance floor you walk up two flights of metal stairs, and when you reach the top of the stairs, as the music completely folds you in half, you can barely see anything. All you can say is, “Holy Fucking Shit.”

Once you get a stamp to Berghain you can come back as often as you like, as long as you take care of that stamp. And believe me: I took care of that bitch! I went back three times, staying hours and hours each time. I went at two a.m. on Saturday but my friend told me that the club really pops off on Sunday morning. For some reason I didn’t believe him; I had to see that for myself. And sure enough when I woke up Sunday morning I could actually hear the club thumping ever so lightly from my room. I couldn’t believe it. I showed up at the club, paranoid I wasn’t going to get in even with the stamp, at a time when most people would be heading off to praise the Lord, and Berghain was HOT, especially the Panorama Bar upstairs where Craig Richards played a kick-ass remix of “I Feel Love” that drove me wild.

How can you write about Berghain, the global church of dance music, without also mentioning the music and the DJs? Nothing like a load of bass thumping through you! Before going I didn’t consider myself a techno head. I love electronic music, people like Andy Stott, James Blake and Burial, but I’ve never really been a fan of commercial “EDM” as it is now called—Skrillex, David Guetta, Tiesto, that type of stuff. The music I heard at Berghain was unlike any kind I’ve ever heard, and now I’m obsessed. Thankfully the club has its own record label, Ostgut Ton, which promotes the unique Berghain sound.

Anyway, this is a club for music lovers, not posers who want to be “seen,” not rich bankers who want to buy a table or get VIP service. And in our current age of social media, knowing that I wasn’t allowed to take any pictures whatsoever actually meant that I enjoyed the experience so much more because I wasn’t worried about updating my Facebook status or taking photos every five minutes. It’s about keeping partygoers “in” Berghain.

When I finally leave the club early Monday morning my ears are humming and at a certain point I can’t tell if my ears are humming or if I am still hearing the club. I wake up the next morning to take the bus back to Paris and my Berghain stamp is slowly fading away. I love club stamps because they are like little reminders of what you did, you little heathen you. Right now the weekend is fast becoming a memory and when I think about the last 20 hours I smile to myself.