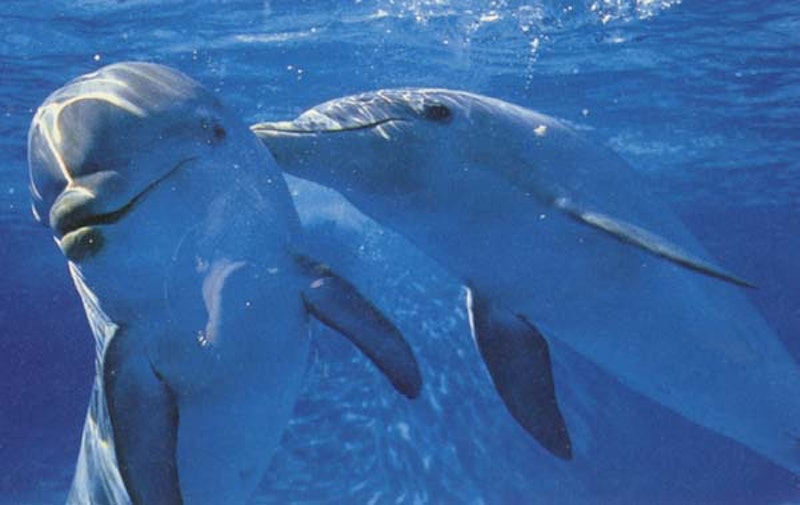 Before October 16, the dolphin show at the Shedd Aquarium's oceanarium in Chicago was charmingly low-key. A trainer dressed like you'd expect came out and dispelled and/or confirmed some dolphin stories (they don't come from outer space; they do appear to be talking to each other). Then other trainers in functional wetsuits put the dolphins through their paces. All tricks, the trainers assured the audience, were based on natural behaviors.

Dolphins in the wild leap out of the water and splash down on their backs, so you see them do that ... but they don't leap through fiery hoops or play the tuba or do impersonations of William Shatner, so you didn't see them do any of those things (fun as they might be). Throughout the show, too, the educational patter continued; for example, at one point the trainer put a tube down one creature's throat, and the announcer explained that this was done regularly so that when they needed to give the dolphin medicine, it was no problem. At the same time the announcer also explained that, since dolphins breathe through the holes in their heads, they have no gag reflex. Which, personally, I thought was pretty cool (the trainer didn't discuss the male dolphin's ability to pick things up with his penis, which was disappointing but perhaps to be expected in an all-ages show.)

Just because the show was straightforward, though, doesn't mean it was boring. Dolphins leapt spectacularly out of the water alone and in groups, and the grand breaching finale was orchestrated to the insistently upbeat strains of "Walking on Sunshine." I probably saw the old dolphin show with my son about 10 times in two years, and he certainly never got tired of it. When we went back to the oceanarium after a break of a year or so, that is what he was most excited to see again.

I was cautiously optimistic as well. I knew the show had been altered and, honestly, after you've seen a dolphin show 10 times, pretty much any change is welcome. So I paid the exorbitant fee to get into my tax-funded museum, and we headed cetacean-ward.

And whatever its failings, the show certainly was different. Shedd spent $14 million on the upgrade, and as part of the bargain, they got some marketing genius to name the thing for them; the dolphin show formerly known colloquially as "the dolphin show" is now called "Fantasea."

As befits the new nomenclature and price tag, Fantasea is not, like the dolphin show of yore, low-key. Instead, it's a Theatrical! Event! Which is to say it's a kind of wannabe Cirque du Soleil with animals. The show opens with a giant bellowing film, which we missed the bulk of, but which, according to  the Chicago Tribune includes some educational content that was too hum-drum to make it into the show proper.

The real festivities kick off with the selection of a lucky child from the audience to act as a surrogate. Said audience surrogate is then placed on a boat lowered from the ceiling, lifted over the guardrail into the water, and whisked off to be draped with an enormous ugly pendant. The surrogate is then urged to wave vigorously to her mom, the trainers, the animals and the giant video screen which allows you to watch everything on-screen, just as if you were home looking at a TV and hadn't shelled out ungodly amounts of money to see the whole thing in person.

Anyway, upon arriving in fairyland, the surrogate sees wonder after wonder. A sea lion pulls a rope down to humorously cheerful music. A dolphin dances upon command, fetches a Frisbee and lies still so the surrogate can feel its heartbeat. Penguins waddle about on deck (insert more humorous music here). A hawk flies across the water-and here you can feel a bit of a strain, because, while the masterminds clearly wanted impressive orchestral swelling during the hawks flight, somebody (perhaps the insurers?) clearly pointed out that the first rule of putting on an animal show is "don't startle the dangerous predator. You idiot." So there's a compromise; orchestral swelling, with the volume dropped suddenly when the hawk actually takes off and makes its short flight across the water.

The most heart-tugging moments in the show, though, involve not the cute penguins, nor the noble hawk, but rather the trainers. Demoted from educators to props, they are ruthlessly dressed up in penguin suits or decked out like British hawkers or hoisted up on pulleys and dropped from a height into the water. Yes, they seem cheerful enough about it in general but good lord-it all seems like a rather cruel punishment for the comparatively minor sin of being a zoologist.

So, was the show an improvement or not? Well, the 10-year-old girl who was chosen as the audience surrogate during our performance was in such an extremity of excitement throughout that she seemed ready to actually cry from joy so yeah, it's hard for even a right bastard like me to argue with that. As another data point, my son said he thought the show was better than its predecessor, though he didn't seem especially enthusiastic when he said it. Perhaps he'd just figured out that, with all the bells and whistles, that it was supposed to be better.

As for me, well, you've probably figured out where I'm coming from already. In the first place, despite all the frills and videos and additional animals, the new show is actually a lot less exciting than the old one. For example, the dolphins don't do a timed race around the interior of the pool. And, just in general, they do a lot less leaping; there's nothing to compare to the repeated three-dolphin jumps which closed the old version.

Additionally, with the darkened room and the giant video screen and the blaring music, you feel a lot less connected to the animals. In the old show, you learned something about dolphins and saw them fairly clearly for a while; you got to feel like they were, not friends, but at least acquaintances. In Fantasea, the dolphins seem more like performers; they're in the same space with you, but you never actually meet them (unless you're the lucky audience surrogate, of course.)

That sense of distance speaks, I think, to the central failure of Fantasea. The old show presented dolphins as natural; they were fellow creatures, cool, but not magical or really different in kind than the folks sitting in the stands. Fantasea, on the other hand, turns nature into a mysterious Disneyland; a marvelous playground arranged for our benefit. It places nature on a pedestal, and putting something on a pedestal is, as feminists have gone to great trouble to explain, intrinsically condescending.

Treating animals as filigree for human fantasies can, obviously, have certain potentially unpleasant ramifications for the animals. But it's also, I think, bad for us. We're animals too, after all. How we treat and think about the dolphins has lots of implications for how we treat and think about ourselves. The plight of the trainers in Fantasea is not an accident; it's a logical extension of the production's logic. Are we natural creatures, with a certain natural dignity? Or are we debased service personnel who exist each to cater to the other in a marketer's vision run amok? Dolphins may or may not have souls, but after seeing Fantasea, it's hard to shake the conviction that we don't.