Bomb Queen: The Apotheosis of Comics 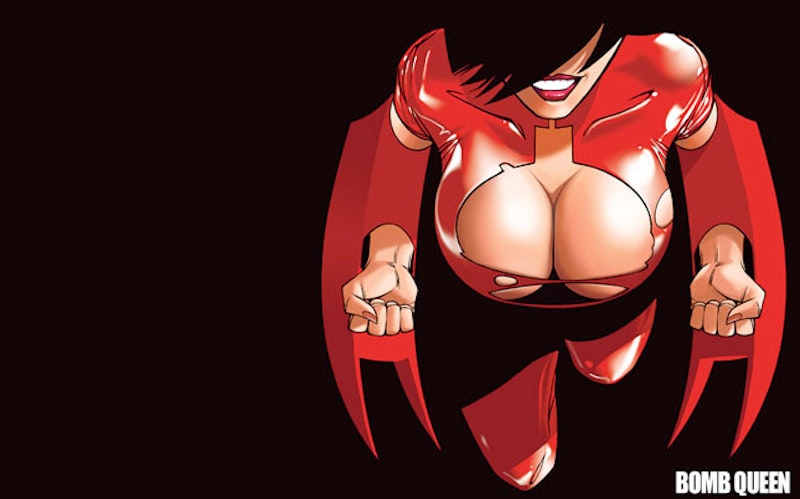 Superhero comic books have always been about the expression of the id. When two nerdy, shy kids created Superman and published him back in 1938, it was an exercise in wish fulfillment: the big, strong, powerful guy who could do just about anything was an expression of everything they wanted to be. Mainstream super heroic comics rarely deviate from this formula, even 70 years later.

Before you’re inclined to dispute this assertion, let’s get it out of our systems: Watchmen. There. I said it for both of us. Now you can shut up.

Publishing standards, however, have always gracefully sidestepped the full-on expression of teenage, male id, with a few notable anomalies. While Marvel Comics’ Incredible Hulk never punched a bystander’s face into a red goop, DC Comics’ Lobo came along in 1983 and had no qualms about eviscerating everyone and everything that got in his way. I’m not sure if DC Comics, even on their most amoral day, allowed children or animals to be part of these gory massacres. Santa Claus, as comic readers know, remained fair game.

The 1990s bore unfortunate witness to the emergence of Rob Liefeld, one of the most maligned artists in comics. While his art is hilariously disproportionate and keeps an emphasis on enormous boobs and biologically impossible bone structures (usually also in the interest of enhancing boobage), some comic critics argue that his art is a very accurate representation of the id, and a very different kind of wish fulfillment. Regardless of the psychosexual implications of Liefeld, he singlehandedly and unconsciously fought against comic books being taken seriously as a narrative medium. His arrested sexual development notwithstanding, Liefeld is not the only one to wedge sexual innuendo into comics. One look at the costume of DC Comics’ Power Girl, which features a large, impractical cutout right above her generous chest, and you know all you need to about where comics come from.

This is why Image Comics’ Bomb Queen is quite possibly the absolute height of comic book wish fulfillment.
The premise: a city ruled by a victorious super villain, the titular Bomb Queen, who is sociopathic, remorseless, libidinous, and powerful. Her city has become a haven for crime, with each rich variety of criminal activity happening within a designated zone, usually inhabited by choice. Rapists, thieves, and drug dealers can ply their desires without consequence. As a result, the bad guys flock to the city from throughout the United States, and subsequently, crime rates are reduced in the rest of the country.

This is something that the government has a hard time arguing with, so they have a hands-off approach to the strange subculture of Bomb Queen. Other entities, however, do not agree with this philosophy and attempt to conquer her. Antics ensue.

Not only does this premise satisfy the id of the comic characters themselves (often tastelessly and alarmingly, but what crime isn’t?), but the fact that the sexy Queen is constantly flopping out of her tiny costume is a whole other strata of reader id fulfillment. One has to respect a comic that doesn’t prance around the issues of sex and violence, but embraces them with a ridiculous fervor. And an actual plot. And boobs.

Obviously, this is not the first appearance of illustrated sex and violence—Heavy Metal magazine, Studio Foglio, manga and Milo Manara had that covered many years ago—but it’s the first time that it’s been so brazen and mainstream at the same time. It never comes across as an attempt to offend or push societal limits à la South Park, but it’s far more graceful in its complete lack of subtlety and restraint. Metaphors are rarely used when the actual words are right there and the censors are turned off. That, and the art is actually good, even if it’s mostly hyperbolic pin-up fodder. That’s the narrative point, which is what actually makes this transcend from a cheap gimmick to an effective story that asks serious questions about morality, although in a ridiculous way.