Baltimore's mayor may be acquitted of all charges leveled against her, but her tawdry behavior and questionable ethics live on forever digitally. 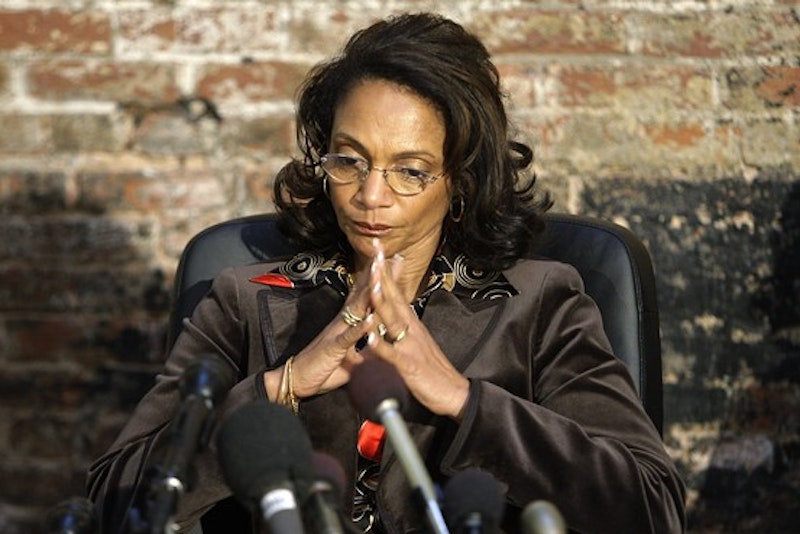 Google is Baltimore Mayor Sheila Dixon's worst nightmare. Win or lose, innocent or guilty, Google will follow Dixon through life like a tawdry rap sheet. Throughout her truncate d trial, it wasn't gift-card Dixon who was on public display. It was the Full Dixon of an accumulation of transgressions who was front-and-center in the voters' psyches.

The tetchy little roundelay that looped through most constituents' conversations was—Sheila, Sheila, Sheila, Sheila, what the hell were you thinking? Dixon should have learned her lesson back when she was a City Councilwoman who was scolded for removing her shoe and banging it repeatedly on her desk like a fitful child. But those who ignore the advice of their elders are bound to repeat the blunder, and that she did, many times over.

The advance billing of Dixon's trial promised to be pillow talk on parade, kind of an awkward priapic "he said, she said" recitation of all those sweet little nothings exchanged between her and lover boy Ron Lipscomb. Not to mention all of the glamorous trips and glitzy gifts that he lavished on her in exchange, so the state prosecutor's argument went, for an occasional tax break, zoning variance or a favorable vote on a development project.

But the lawyers decided otherwise, leaving jurors befuddled and voters smirking. Lipscomb was off the hook. So, too, in a way was Dixon. Except for Google. She never got a chance to tell her side of the story (luckily) even though she pretended to be eager to spill the beans on her former bedfellow.

Dixon had been in a tough place. She'd been trapped between the age-old predicament of being ordered by lawyers not to talk and the public's right to know through the media. After all, everybody likes a good story, especially if it's saucy. Despite the gag applied by her lawyers, Dixon said, often enough, that a lot was going to come out during the trial. Nothing titillating ever did.

There were actually two Dixon trials. One was on the sidewalk outside the courthouse being conducted for the television cameras by the ubiquitous defense attorney Warren Brown, and the other inside the courthouse with a real judge, jury and a gaggle of lawyers who left both audiences anxious for them to flesh out the story.

And now there are those who are advising Dixon to let it all hang out once the trial is over and get the messy stuff behind her. So what to do? Why, of course, jam the media as intruders and the prosecutors as leakers. There's probably a touch of veracity to both claims. But ever since Richard Nixon declared in 1973, "I am not a crook," the political gambit of blame-the-messenger has been totally discredited as an otherwise legitimate public relations device.

Lawyers and reporters have separate and often competing functions and responsibilities. Lawyers represent their clients and reporters represent the public. And when they get in each other's face, as they do more often than not, it means they're both doing their jobs. News, like metaphysics, proceeds from the question. Huh? is more of a stupefied reaction than a probing question. Funny thing, though. Reporters are the last to understand that people don't have to talk to reporters. Yet public officials have an obligation to keep their constituents informed on areas of their responsibility as well as to be held accountable to the public for their official actions and personal peccadilloes.

Lawyers love publicity. It's good for business. That's partly why they advise their clients to clam up and let them do the talking (when it's convenient) and remain silent (when it's convenient.) The danger, of course, is that the client's loose lips can damage a case or an innocent slip of the tongue can jump start an otherwise dull trial. That was part of Dixon's dilemma. In some cases, the truth will not set you free but, instead, just might provide the tiny crumb of information that will bring the law banging on the jury box rail.

The trial's narrative is this: Dixon allegedly received gift cards from developers which the state argued were intended for the needy but Dixon used for herself, family and friends. Dixon's defense was that she thought they were intended for her personal use. The jury was asked to decide between theft and embezzlement—one or the other but not both. A separate trial for perjury is scheduled for March, 2010, for her failure to report the cards as gifts. Cheesy but really small potatoes compared to Goldman Sachs and AIG.

Here is the story Google tells: There are 38 pages of references to Dixon that currently show 151,000 hits. Many of the stories deal with the investigation and trial over the past three years. Even more damning is the paper trail of ethical lapses and questions that have accumulated in Dixon's Google file over her years in public office..

A sampling: At one point, Dixon employed her sister, Janice, on the City Council payroll as an aide and was forced to fire her because the nepotistic practice violated the city's ethics law. The same sister was presumably at the center of a continuing investigation by the state special prosecutor into whether Dixon used her influence to steer city money to a company, Union Technologies (Utech), that employed her. The head of the company, Mildred E. Boyer, was indicted and pleaded guilty to filing a false tax return and promised to cooperate in the investigation of Dixon. The city's ethics board cleared Dixon in a very narrow technical ruling: There was no complaint upon which to act.

In a brazen example of strutting her arrogance, Dixon was involved in still another embarrassing incident involving city money. Her former campaign chairman's company, Ultimate Network Integration, was paid more than $600,000 without even having a contract. The instruction to Dale G. Clark was to submit bills in increments of under $5000, a small enough figure to not require Board of Estimates' approval and skates by without scrutiny or question.

There was the revelation, too, during the trial that her current boyfriend, Edward Anthony, a recipient of one of the transactional gift cards, was awarded a $10,000 raise (from $70,000 to $80,000) upon assuming a job at the city's housing department. And, of course, everyone remembers the heavy-handed misadventure of former U.S. Attorney Thomas M. DiBiagio, who ordered an investigation into all (then) 19 members of the City Council only to have the probe discontinued by his successor after DiBiagio was fired by the U.S. Justice Department.

There are reams of stories and files about Dixon's imperious manner and hubris, her violation of state open meetings laws and her downright surly attitude toward colleagues when she was a City Councilwoman. In politics, as in life, there are rules and there are principles. Upon scanning Google, it is safe to assume that Dixon abided by neither. Rules and principles exist for the rest of us but not for Dixon.

This list goes on, an accumulation far beyond the length of this installment. So, for your reading pleasure, cynical enjoyment, political humor or absolute disgust, Google Sheila Dixon, if you will. It's worth the scroll. It's the cumulative Sheila Dixon who was on trial in the voters' minds.