Mandates, like it or not, are the entangling feature of every budget debate; and, wonder of wonders, with all of the executive’s awesome power, there’s little, if anything, the governor can do about them. 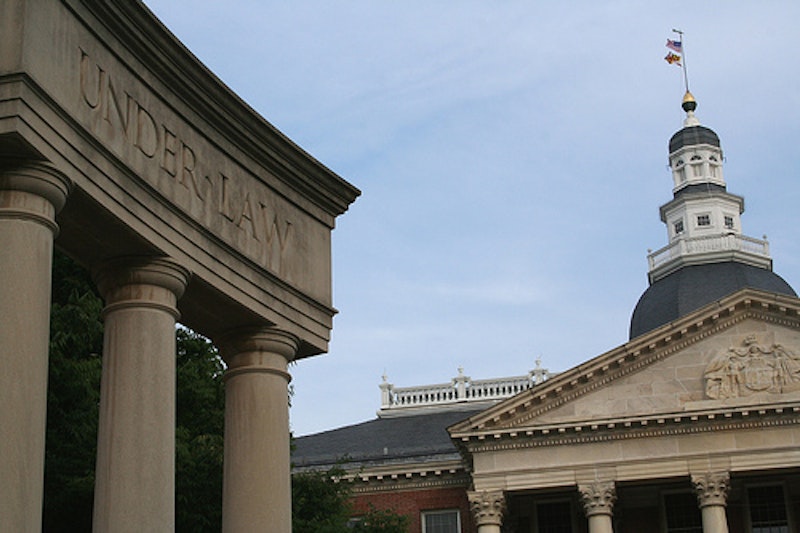 When the 2010 Maryland General Assembly convenes on January 13, the 90-day session will be a meeting of low expectations and even lower productivity. After all, it’s an election year when no incumbent likes to get into trouble over controversial legislation and there’s no money to do anything anyway. Let us pause to count our blessings.

There’ll be a passel of “gesture” legislation, bills that cost nothing and do little but please some constituency or another with a tribute of good will or recognition. So it’s important to remember that it is the function of a legislature to kill bad bills as well as to enact good ones.

And it is essential to be aware of this: The General Assembly has only one Constitutional responsibility and that is to enact the budget. And therein lies the problem. Gov. Martin O’Malley (D), with the help of the Assembly, must cut $2 billion from the spending program in order to achieve the balance that is required by law. O’Malley had an assist from the state’s Spending Affordability Committee, which recommended the first zero-growth budget since it was established in 1982. This, in itself, should shave about $1 billion, if the non-binding advice is observed. It’s tough to cut a budget when 80 percent of the funds are required by law.

But it’s an indisputable fact: Government can never do enough in an area where it previously did nothing. The word “mandate,” with all of its magisterial intimidation and threatening connotations, has joined the lexicon of epithets right up there with the saltiest drunken-sailor expletives, X-rated vulgarian bluster and a Block bouncer’s salacious bark. Mandates. There’ll be a lot of talk about them for the next three months. It’s become a profane word, uttered with an almost apoplectic, disrespectful and totally unapologetic hiss.

Receiving a mandate is, in a mercantile sense, a blessing; paying for them, as taxpayers do, is a curse. But mandate, like it or not, is the entangling feature of every budget debate; and, wonder of wonders, with all of the executive’s awesome power, there’s little, if anything, the governor can do about them. Mandates, by constitutional amendment, are legislative dictates that must be obeyed to the dollar.

There have always been special government funds of one kind or another. For example, the unified transportation fund underwrites Maryland’s transportation network—its veins of roads and highways, two subway systems, the Baltimore bus system, the Port of Baltimore and the MARC rail system—and transfer taxes are set aside for land preservation.

Google is vague and meandering about the origin of mandates. But the hunch here is that they seriously entered the system during the FDR years with entitlement programs such as Social Security. And they intensified under Eisenhower with road-building (gasoline) taxes and reached their apogee during the Great Society years of Lyndon Johnson.

In the 1960s, the federal government was sending obscene gobs of money to the states for social welfare programs (school lunches, job training, etc.) But Southern states, sensing a cash cow, were applying the money to such projects as building roads and prisons instead of feeding hungry children. Enough, said the federal government, and mandates were stipulated through categorical grants, as opposed to bloc grants.

Gradually mandates, as they are now known, made their way to the states because much of the federal largesse being shipped from Washington required them. Now, for good or ill, we’re stuck with them as a fact of government life. Here in Maryland, in the late 1970s, the General Assembly began treading on executive prerogatives, a tetchy venture at best that lingers to this day. As every political hobbyist knows, Maryland has the strongest executive budget system in the nation, adopted in 1917 when the state was threatened with bankruptcy because of the legislature’s profligate spending. The General Assembly can cut the budget but not increase it. Nor can it shift money among programs. Be grateful for small favors.

Back in those bad old days, the legislature, feeling its oats, assumed that it could direct the governor to spend specific amounts of dollars on specific programs of its designation. In other words, the General Assembly could mandate—order—programs and money. A test case went directly to the Maryland Court of Appeals, but no such luck. The court ruled that the legislature lacked the constitutional authority to mandate programs because of the doctrine of separation of powers.

So, in 1978, the General Assembly adopted a constitutional amendment giving itself the authority to mandate programs. Constitutional amendments, once they’re adopted, by-pass the governor and go directly to the voters on the next general election ballot. In 1978, the voters of Maryland approved the amendment that gave the legislature the authority to direct the governor, through program mandates, formulas and dedicated funds, which programs must be funded and how much money he must provide. To tie the knot even tighter, the governor has absolutely no discretion or flexibility over mandated, or dedicated, funds. He must follow the direction of the legislature. So stop bellyaching, folks, we did it to ourselves.

Today, as a result of the 1978 action by the voters, fully 79 percent of the state general fund portion of the budget (about $13 billion after a $3.2 billion round of cuts) is mandated and must be funded up to the level prescribed by the legislature. The only way to undo the mandates is to repeal the laws (programs) that require them and re-enact them with lesser mandates or none at all.

There are basically three categories of mandated appropriations in the Maryland State Budget, according to a tutorial assembled by the Department of Legislative Services, which is the fiscal advisor to the General Assembly, a function very much like the Congressional Budget Office:

1. “Mandated Amounts/Entitlements: General or special funds that have a statutory or constitutional requirement that designates a specific amount be appropriated or a specific formula be used to calculate the appropriation, or that are required payments through an entitlement.

2. “Funds with Mandated Purposes: Special and higher education funds that have statutory dedications identifying a broad purpose for the funds but which allow the governor discretion as to how the funds are allocated and used.

3. “Non-Mandated General funds: Funds that allow the governor substantial flexibility as to the administration and funding levels of the programs with which they are associated in many cases, state law requires expenditures for these programs without specifically mandating the amount or purpose.”

The following examples of mandated funds are from the syllabus prepared by the Department of Legislative Services.

So anyone who talks about removing mandates to get rid of programs and reduce spending to balance the budget had better take another careful look. Pretty much the entire budget is under legislative mandate, for one peculiar reason or pet project or another, and there’s very little the governor can do about it.

Correction: Last week’s column erroneously reported that the one-casino-per-owner law would require ballot action by the voters to reverse so consideration could be given to David Cordish to bid on the Baltimore City site. The ownership rule is written into the enabling legislation and not the Constitutional Amendment and therefore could be revised by the General Assembly without voter consent.