A conversation with IED-IUD, Maryland’s most dangerous band. 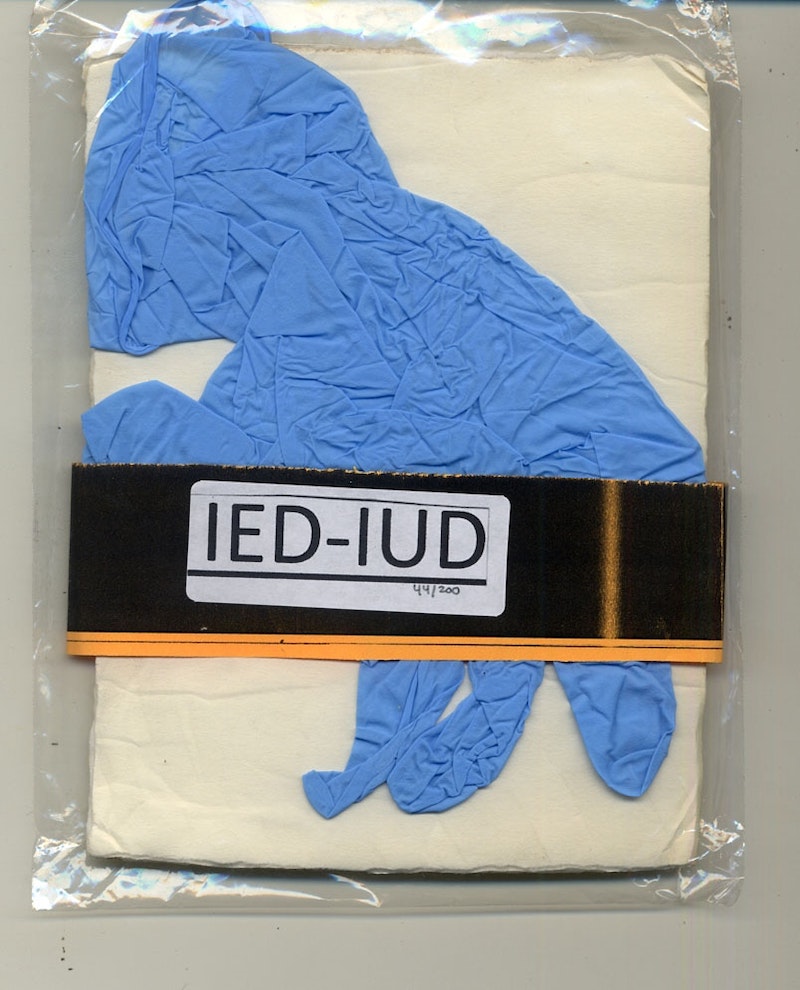 SPLICE TODAY: IED-IUD is a brilliantly provocative band name. What inspired it, and how did you come up with it? Have you taken any flack for it?

KEN MARS: The initials sounded good together and the idea of an explosive contraceptive device appealed to us. It's a possible weapon for women to use against men should they need it in the war of life and sexual politics. I hope not on us. It's an absurd concept, as we would imagine considerable harm coming to both parties should such an item be detonated. As far as band names go, it's pretty tame.

ST: For sure, your album packaging is provocative—and the fries sleeve is more disturbing than the glove was. What made you decide to go that route, and what kind of reactions have you gotten for it? For some reason I keep imagining a ton of people showing up to your shows wearing the accompanying glove on one hand, but then also wearing surgical masks, so a kind of combined IED-IUD/Michael Jackson stunt effect.

KM: Our packaging aesthetic was inspired by/stolen from the band CAROLINER, who we all are big fans of. All of their albums are self-packaged and often are one-of-a-kind art. One LP was packaged in a medical waste bags that they we're able to buy 500 of. Others had elaborate hand-screen printed covers. I deeply appreciated the individuality and the artistic personality of their releases. The concept of the album cover as art has been mostly discarded by modern music and downloadtopia.

The "Blue Glove" packaging was meant, in a way, to punish the audience for buying, not the album, but the packaging and force them to consider the very concept of packaging/ over-packaging as they struggle to extract the CD and the inevitable disappointment that the original packaging was ruined in the process. It was conceived as an auto-destructive commercial art commentary. That sounded pretentious as fuck, but, yeah totally. Bret McCabe's Baltimore City Paper review of that first album illustrated what we were hoping to achieve. Thankfully, he only hated the packaging because it was a fantastic review of the music! The “French Fries” packaging is the apology for the “Blue Glove” packaging. I found hundreds of them in a basement years ago. Recycling!

The third album will be wrapped inside a Gordian Knot.

From day one, the idea was that everything be over-driven and lo-fi; almost like a four-track cassette recording circa 1992. When you are recording electronic-based music, it’s very easy to get a clear sound and over-dub until you puke and make it sound slick. I placed deliberate limitations on overdubbing and emphasized mixing the whole mess in the “wall of sound” style. Recording both guitars on the same track to get a new sound altogether is not the way it’s usually done. I hope through the mud, some semblance of a melody or idea will come through.

Frankly, I’d be fucking thrilled as shit-kittens if somebody wore a blue glove at a show. I mean, as long as it wasn’t a paramedic treating an injury or overdose. We've had a somewhat tough time getting gigs locally because most of the promoters and clubs we've talked to don't know what bands to put us on a bill with. We’re not picky as long as they are loud and heavy. Personally, I like a little variety in a show.

ST: The most significant difference between your first and second albums, to these ears, is that you guys sounded less like a robotic electronic wraith and more like a noisy rock band; the percussive elements seemed less pronounced, too. What was your aim, going into the second album, in terms of what you wanted to accomplish?

DAVID LITZ: Most of the stuff on the first CD was improv sessions that Ken took, dissected and rearranged, then added vocals, synths, and so on to. We actually had to re-learn everything to play live, because we couldn't remember what we'd recorded.

I guess the second album has traces of the deconstruction/reconstruction, but was a little bit better thought out, and I think we might've even tracked everything, whereas the first album, most of the guitars and percussion were all run through the same mixer and effects, then fed directly in, recorded on the spot with not much mixing afterward.

What were we trying to accomplish? To make something that's weird, fucked and reactionary. We've never aimed to sound like anything in particular or to be derivative. But I was bombed on Jenkem through most of the recording process, so it really didn't matter to me. I thought we were supposed to make a Windham Hill CD.

KM: The only thing I hoped to accomplish with the second album was to finish it! I also made music video DVDs for both releases. The videos match the music and packaging concepts together very nicely.

I’m currently in production on a Sci-Fi/Horror movie called REVENGE OF THE HOMUNCULUS and in the spring, Dave will be helping me record the soundtrack. I'm assembling a crack team of contributors including Alex Strama from MT6 Records /NEWAGE HILLBILLY and Nick Podgurski from YUKON/ FEAST OF THE EPIPHANY. It stars Shawna Potter from AVEC! And WAR ON WOMEN. We will begin working on the third IED-IUD album around May; it will more than likely be released at next year’s MT6 Fest.

ST: There's a sense of darkness and terror that permeates your albums, a kind of cyborg horror flick mood. Are you guys into scary movies and macabre art?

DL: I can appreciate dark, terrifying, macabre things, but I honestly can't say I'm "into" scary movies or macabre art. I did, however, grow up on slasher films at a very young age, but by the time I was in my late teens and definitely at this point, I'm just bored with it. Dystopian fiction, mind control, cults, apocalyptic writings; that stuff interests me, but I don't find that stuff necessarily dark or scary, more of a questioning of the status quo.  I'm such a skeptic and cynic that I guess those kinds of things are just "normal" to me.

KM: I happen to love cyborg horror flicks, HARDWARE (1990) and TETSUO: THE IRON MAN (1989) in particular. I fancy myself quite the diversified film buff with a particular slant towards sci-fi.

Danny and Dave play very edgy riffs. I went with whatever mood they established and tried to vary the lyrics and vocals as best I can.

ST: There's a band named IUD featuring the singer from Gang Gang Dance who are at least as terrifying sonically as you guys are, albeit in a different way.

DL: The Gang Gang Gance-related IUD sounds like some contrived Brooklyn hipster BS to me, am I wrong to think that? Yeah, dub is cool, but I can only imagine trust-fund kids in neon, hopping around onstage with shirts and hats labeled with pseudo-political slogans.

KM: I agree with Dave's answer. What would this be like live? Some douche at a laptop pretending to be "playing Abelton" while he updates his Facebook status? I feel like we offer a more challenging listen both at home and in person.

ST: How did you guys come together as a band?

DL: Danny and I did improv/electronics/noise together for a few years off and on. Also both of our former bands, The New Flesh and Vincent Black Shadow, did shows together, even a short tour to SXSW and back. Lots of fruitbowling and assorted debauchery on that trip. After both our bands were defunct in spring/summer of 2010, we decided to try to structure the elements of  "noise" into "songs" or something that resembled such, so we grabbed our guitars and our machines and went at it. We really needed a drummer or programmer though, which is where Ken came in. We both knew Ken from his bartending at the old Talking Head and other spots. Little did we know that Ken would end up shaping this project into what it is now.

ST: What is "fruitbowling"? I'm totally in awe of this term, had never encountered it prior to now.

DL: “Fruitbowling” is when you tuck your junk between your legs, then sit on someone's head. If you see the tucked junk from behind, you understand the "fruitbowl" idea. This happened a few times on a short tour to Austin and back, with both the New Flesh and Vincent Black Shadow sharing a van, during which an unnamed, very bored NF member did it to a somewhat prudish, boring VBS member. I'd pay to see it again.

KM: I'm pretty sure that's on Porntube. The New Flesh (original recipe) were the shit.