A walk through underrated protest music of decades past. 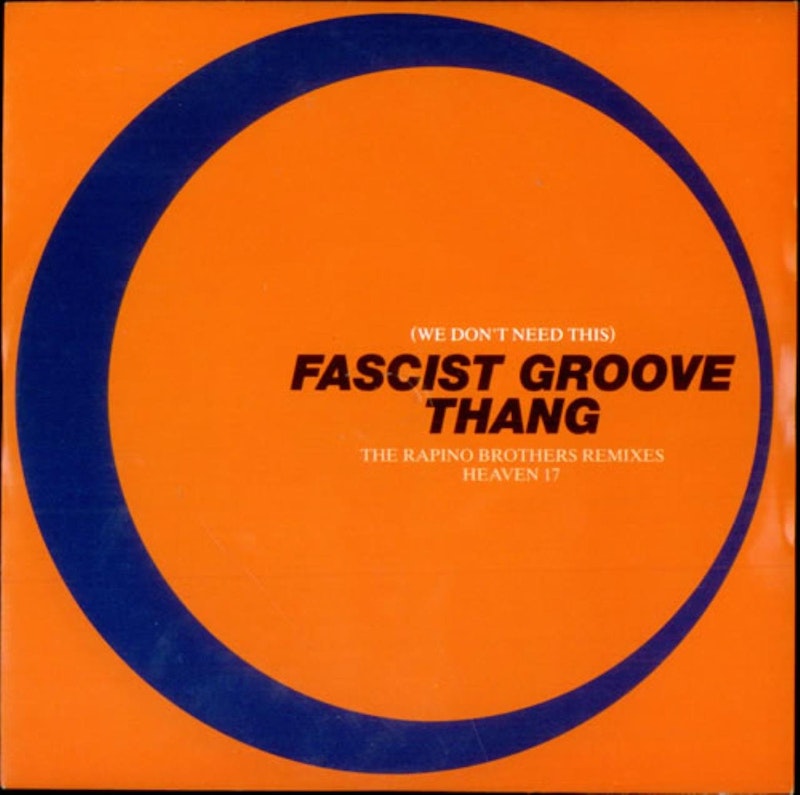 The 1980s are often regarded as a time when pop music became unbearably superficial. Legend has it that MTV produced an era that was style over substance, manipulated by over-involved corporate lackeys, which is how "We Built This City" happened. While there's a kernel of truth to that assessment, the reality is far more interesting.

The "greed is good" decade was an unexpected golden age of protest music where no topic was off limits, usually with a danceable beat. Musicians that grew up on the countercultural soundtrack of the 1960s and 70s gave the 80s a lot more intellectual diversity than Top 40 radio would indicate. Spending their childhoods under the shadow of the Cold War and watching the folly of the Vietnam War on television, this generation of artists were often using their work to explore the consequences of what they perceived as avarice run amok.

Protest music has always existed, and in the 1960s folk revival, it was largely tethered to the anti-war and civil rights movements. As American punk emerged in the 70s, the first crop of artists weren't apolitical, but not explicit in their politics. If American punk had a political perspective at this point, it wasn't much deeper than the slogan of "the personal is political."

When punk exploded in the UK, it was far more confrontational and defiant. The Sex Pistols stoked controversy with their anti-Royalism while denouncing a class system that made social mobility nearly impossible. The Clash had a more global outlook that similarly railed against Britain's classism, and would go on to explore colonialism's continuing impact. Initially feeling liberated by punk's rule breaking to write songs about anything, new wavers and indie rockers were the harbingers of a new consciousness in pop that would go on to include prog rock and singer-songwriter stalwarts.

If the British made pop music more political, it's because politics had become unavoidable. Leading up to the 1977 punk explosion, the economic climate was such a mess that the gravediggers' and sanitation workers' unions were striking. The Troubles were raging, and the children of the Irish immigrants who worked to rebuild a London destroyed by the Blitz had now come of age. Their Irish last names kept them from finding decent paying work, and their British upbringing made integrating back into Ireland impossible. The more creative would reinvent themselves as Johnny Rotten, Morrissey, Billy Idol, and Boy George.

The start of the Troubles is usually placed at the Easter Uprising of 1916, but the 1970s saw a new surge in violence. Descended from Ulster Catholics, Elvis Costello wrote "Oliver's Army" after personally witnessing young British soldiers walking village streets during a visit. Spandau Ballet's "Through the Barricades" was created in tribute to a member of their touring crew that was killed in a Belfast bombing. The Police and U2 shared a common expression of exhaustion at the persistent violence. While "Invisible Sun" was highly introspective, U2's "Sunday Bloody Sunday" was far more direct in demanding "How long?" Simple Minds and Clannad provided songs of mourning rooted in Irish hymns, with "Belfast Child" and "Theme from Harry's Game" becoming surprise hits in the UK.

At nearly seven minutes, Peter Gabriel's "Biko" was, in 1980, an unusual song to crack Britain's Top 40. Gabriel's growing interest in African music and culture led to his learning about the life and death of anti-apartheid activist Stephen Biko in police custody. Aiming to both inform and pay tribute, "Biko" became an entry point to Western artists paying more attention to South Africa's human rights abuses. The song was seized by South African customs officials, as were subsequent anti-apartheid songs. As the movement coalesced around freeing Nelson Mandela from prison, the songs became more direct, with Stevie Wonder's "It's Wrong (Apartheid)" and the Specials' "Free Nelson Mandela," with Simple Minds celebrating "Mandela Day" by decade's end.

In the U.S., E Street Band guitarist Steven Van Zandt co-created Artists United Against Apartheid to promote a boycott of the whites-only resort, Sun City. Van Zandt assembled an impressive roster of musicians from several genres to participate, running the gamut from Miles Davis to Run-DMC to Stiv Bators, but the confrontational song failed to garner the kind of radio support that "We Are the World" enjoyed a couple of years earlier. Some station managers cited lyrics, sung by Joey Ramone, that were critical of Ronald Reagan's "constructive engagement" approach to South Africa, which ran counter to the United Nations boycott.

The Ramones continued to needle Reagan in the song "Bonzo Goes to Bitburg," inspired by his tone-deaf visit to a military cemetery in West Germany that happened to be the resting place of many Waffen-SS. The Ramones weren't alone, joined by Jackson Browne's criticism of Reagan's Latin American interventionism in "Lives in the Balance." The Violent Femmes went for morbid mockery, imagining the imminent demise "Old Mother Reagan."

In Heaven 17's "We Don't Need This Fascist Groove Thing," they call out Reagan directly as a harbinger of doom, but I've always thought the song implied that they viewed Reagan as a twin demon to Margaret Thatcher. Genesis makes a similar case with "Land of Confusion," and drives the point home with its video. A bit like the Violent Femmes, Elvis Costello and Morrissey took perverse delight in Thatcher's death with, respectively, "Tramp the Dirt Down" and "Margaret on the Guillotine." New Order was more constructive, taking Thatcher's austerity policies to account in "State of the Nation." The Beat simply demanded, "Stand Down Margaret."

The most specific critique of Thatcherism may have been Boy George's "No Clause 28," condemning a loosely-worded statute that allowed local governments in the UK to ban materials seen as promoting homosexuality. In addition to being condemned as insensitive in the face of the AIDS crisis, the immediate effect landed on shutting down school-sponsored LGBTQ support groups. Almost anticipating this debate, Bronski Beat's "Smalltown Boy" cut to homophobia's isolating impact. It's a telling commentary cycle of liberation, backlash, and tragedy that the 1980s opens with Pete Shelley's joyfully defiant "Homosapien," which has evolved into an LGBTQ Pride theme song, and ends with the Pet Shop Boys' mournful "Being Boring:" "All the people I was kissing/Some are here and some are missing..."

The Cold War, and its ensuing nuclear paranoia, prompted a strong wave of songs envisioning the end of the world. Lovers separated by war was a common theme, showing up in the Pretenders' "Day After Day" and Nena's "99 Luftballons." Kate Bush's "Breathing" pondered the after effects, where children will try to grow up in the poisonous air, while INXS considered the weapons themselves for "Guns in the Sky."

A resurgence of anti-war songs ran parallel, often with first person narratives. The Motels' "Mission of Mercy" and New Order's "Love Vigilantes" exist as mirror images. Where "Mission of Mercy" is told from the perspective of a daughter watching her family fall apart while the father is at war, the soldier in "Love Vigilantes" returns home to find that things aren't the way he left them. The protagonist in the Talking Heads' "Life During Wartime" might be a seditionist on the run, and Blondie's "War Child" playing the rubble could just as easily be in Cambodia, Northern Ireland, or the West Bank.

For much of the 1980s, metal was largely party music. In the documentary, Joe Strummer: The Future is Unwritten, there's a clip of David Lee Roth making fun of "bands like the Clash" for taking themselves too seriously. Yet heavy metal produced two ageless, blistering commentaries. "One" was Metallica's anti-war epic, aided by a haunting video featuring clips of the film Johnny Got His Gun. Inspired by Dalton Trumbo's novel about a horribly injured veteran, who has been left without arms, legs, a face, or a way to communicate, the end result is an immersion into the traumas of war. Megadeth's "Peace Sells" takes an unusual approach. Where so many songs are promoting social justice, they question its commodification: "Peace sells, but who's buying?" In addition, the band aimed to create something to show metal could have more lyrical depth than the partying and power ballads that were overwhelming rock radio.

With "The Message," Grandmaster Flash & the Furious Five took the music of the block party and wrote about what was happening on the block. The song initially sounds like a group of guys complaining about life in their neighborhood—crazy people, bill collectors, troublemaking kids—but taken as a whole, it's still a remarkable piece that gives voice to the indignities of poverty. Subsequent artists like Public Enemy would cite the song as giving license to take hip-hop in a more militant direction, culminating in "Fight the Power."

As homelessness and poverty surged in the 1980s, more mainstream artists were inclined to try to address the issue. Phil Collins would do it twice, once with Genesis ("Man on the Corner") and as solo artist ("Another Day in Paradise"). Sung from the perspective of a woman in a homeless shelter, Tracy Chapman's "Fast Car" ponders the life choices that keep people trapped in a generational cycle of poverty.

While those songs deal more directly with urban poverty, rural America was also seeing its standard of living rapidly deteriorate. The town in Bruce Springsteen's "My Hometown" descends into irrelevance after the textile mill closes, and the farmers in John Mellencamp's "Rain on the Scarecrow" and Don Henley's "A Month of Sundays" confronts a future that doesn't have a secure place for them. All three of these songs are also about the end of a legacy—Mellencamp isn't sure he'll be able to pass the farm he inherited from his father and grandfather on to his son; Henley wonders if encroaching suburbia and his educated grandson will mean the end of his way of life; and Springsteen realizes that doing right by his son is more important than loyalty to the place that made him. They all hint at a certain kind of elitism, that their characters are faced with difficult decisions based on the whims of faceless businessmen and politicians.

As I listened to these songs on heavy rotation, I was struck by how little parallel I see in contemporary music. Media consolidation has led to a cultural dumbing-down, but also a phobia of critical thinking. The sentiment of "shut up and sing" has left audiences suspicious of subversive art, no matter how cathartic. I don't love every song that I've mentioned, or even agree with some of them—I think wishing death upon someone is pointless and gross. But I'm glad they at least exist as cultural artifacts.