London O'Connor's O∆ is in an underappreciated black tradition. 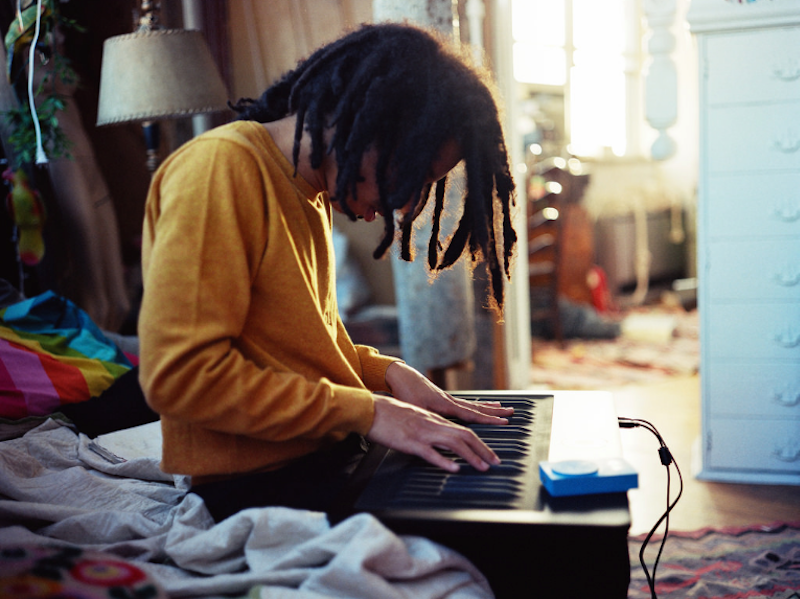 When critics talk about "unapologetically black music" they usually mean tough funk or gritty soul—rough, masculine, and swaggering. James Brown, Funkadelic, and most recently Kendrick Lamar are seen as quintessentially black because they work in musical styles that are seen as authentic. Real blackness is defined as black people performing music in a style critically accepted as "real."

The problem with linking blackness to genre, though, is that there's a long and illustrious history of black people performing music that isn't especially harsh, brutal or hard. From Nat King Cole to Marvin Gaye, there are a lot of black performers who enjoy smooth, polished, elevator music—hooky, wallpaper tunes that aren't for dancing, but for staring at the ceiling cross-eyed. Fifth Dimension tracks like "Orange Air" are orchestrated washed out psychedelic musical theater; inoffensive enough to offend anyone who thinks black people should only make music to offend. One mode of unapologetic blackness is dirty funk. Historically, though it hasn't been the only one.

London O'Connor's  new album O∆ (pronounced "Circle Triangle") is in the bland egg-nog tradition of black music. The soundscape is influenced by vaporwave's sedated mix of lounge and elevator nostalgia. On "Survive," O'Connor croons in a brittle falsetto like a cabaret singer whose drug cocktail was just a little too intense, moaning about how he wants to be boring. "I don't like these thrills/they just bring me down/they just bring me down/I get in my car/It pushes me around/It pushes me around, around, around." He then segues into a laid-back rap, musing, "far out, far out like the Far Side." Sitting in a car and thinking about the mind-blowing 1990s single-panel comics. That's not what you'd think a song called "Survive" would be about.

For O'Connor, though, survival, or just existence, means embracing his suburban malaise. The video for "Nobody Hangs Out Anymore" opens with O'Connor staring at a television while sitting in a sandbox-like drift of orange/yellow while the beat chimes forward with a dragging shuffle, like a doorbell wrapped in mothballs. "We stay inside and watch the tube" he sings, and then raps "all my friends are on the net and all my friends are in the net and all of us are out of it and none of us are into it" as he eats a bowl of cereal. Then there's a series of images of him and a bunch of multi-ethnic bored kids staring into space lip-synching the sad hook, "nobody hangs out anymore."

O'Connor's deep truth isn't the urban jungle; it's vague, shallow nostalgia, a community of ennui, and nerd culture references. The short intro called "Coordinates" is just an excuse for a wiggy Star Trek joke. "Captain's Log: heading on coordinates OO36, keep mission forward, on my way to Celine's house." O'Connor's going to a girlfriend's, maybe, imagining himself as Captain Kirk or Picard. Pop culture swishes around his brain with infantile yearning. "I like this girl/but I don't know what to tell her/because what I tell her/might be pushing her away/or it might be what get her to stay," he sings indistinctly on "Love Song." Even the diss track "Guts" a song with a more visceral groove, has a loopy stream of consciousness cutesiness; "I hate your stupid looking/two-bit crooked/cheap ass ornaments" is more a toddler playing at being mean than an actual attack, and the hooky chorus "I hate your guts" is designed for humming along.

If Kendrick Lamar is unapologetic blackness, is London O'Connor, immersed in the Internet and references to Oscar the Grouch and Quaker Oats somehow too apologetic? Maybe the idea that some black people are apologizing and some aren't is a poor way to approach pop music to begin with. O'Connor's music is a celebration of the inner landscape of blah. "All of the colors are painted on/Shit's fake/must be a mistake," he moans on "Natural." "Nothing feels natural in this place/Nothing grows natural." O∆ embraces its sublime and flat inauthenticity. Why shouldn't that be authentic too?