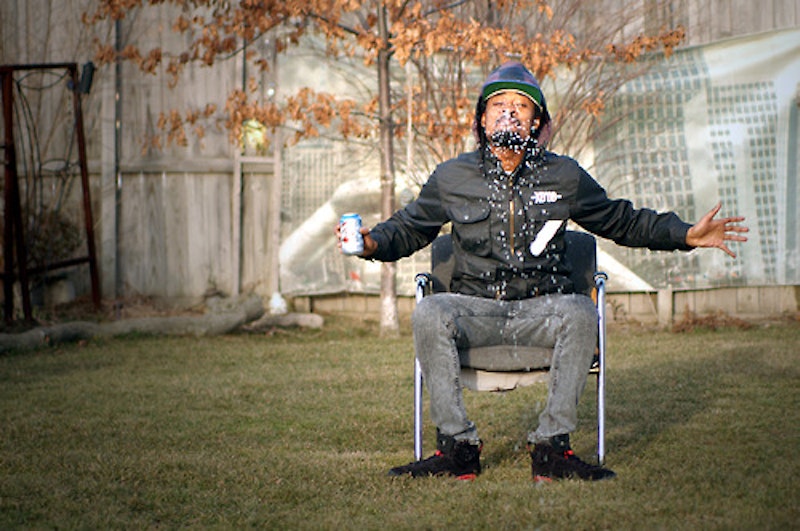 The guitar solo on "Guitar Solo" is a fabulous guitar solo, a fluid, blues-y gem of a solo, screaming eagle and bone-chilling and white-hot searing in a jazz fusion way; it's the kind of guitar solo that makes sense after midnight, tapped out, no reserves, when the right combination of player and ax and emotion are enough to bring a moment into direct focus or to send the listener scrambling to hold onto it. Funky. (Or maybe not—maybe that's the uber-incisive bass line, rubbing off.) Soulful. It's got bite, it stays with you.

At his absolute best, Detroit rapper Danny Brown creates a portal into an urban dystopia of absurdist desperation and flamboyantly irresistible clowning. The Quelle-produced "Guitar Solo" is not Brown at his absolute best, but it may be Brown at his canniest, or most narratively self-aware. A two-tiered origin story, the song tells the tale of an at-risk young man ("He wants something to eat, and his sneaks so scuffed/lookin' in his eyes, you can tell he's living rough") and his girlfriend ("So now you ditch class because your belly gettin' bigger") in a matter-of-fact, colloquial style. There's nothing inherently unique in this approach; from Pete Rock & CL Smooth's "T.R.O.Y." to Jay-Z's "Meet the Parents" to Gucci Mane's "Timothy," hip-hop—even violence-glorifying, ghetto fabulous hip-hop—has always had a penchant for this sort of instructional storytelling, for object lessons, for cautionary tales.

What makes "Guitar Solo" different and interesting is Brown's willingness to call bullshit on the idea that any of it matters much to anyone, that what he's providing and what we're ingesting is anything more than entertainment. Will the young man go to jail for robbery, or get clear and thug harder? Is the young woman doomed to repeat her mother's mistakes? Brown's response is an almost blasé shrug: "I hope I find out after the guitar solo." And then the solo unwinds, seductive, representational perhaps of the flash and coddle of advertising, Brown's laconic refrain—"THE GUIT-TAR SO-LO"—grounding the listener in the narrative, keeping us hooked until the verses return. That we never find out in either instance could be instructive in a number of ways: because are we anticipating the best, the worst, some fourth-wall breaking condemnation of poverty policy in America? By sidestepping conclusions and letting the beat ride out for the last half of "Guitar Solo," Brown denies us any sense of catharsis or resolution, effectively demanding that we fill in the blanks or contemplate the sort of catering, imagination-deficit enabling role that so many facets of media play in our lives as we eagerly and willingly play into the hands of oligarchs and factotums.