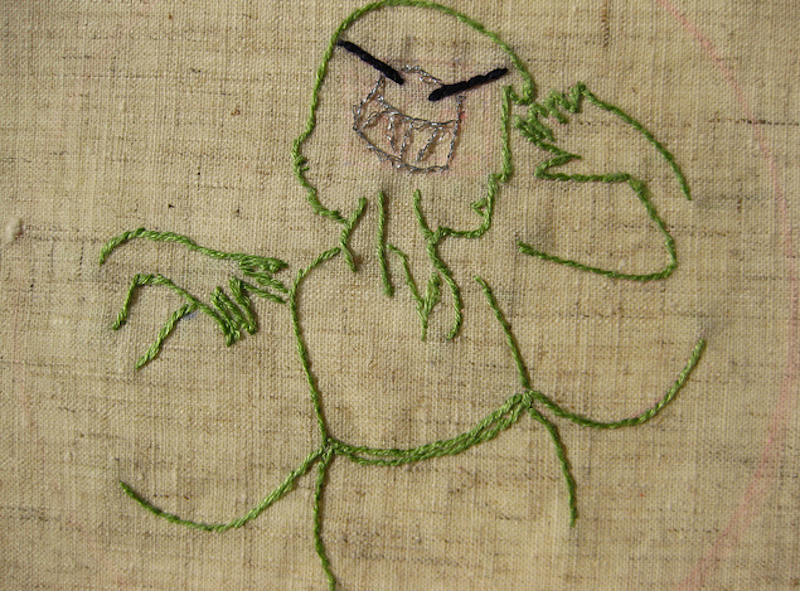 It’s weirdly fitting that, upon walking into Normals Bookstore on 31st St. in Baltimore to catch a free improv performance at the adjacent Red Room, I spied a few copies of Crucial Sprawl, a book of poetry by Splice Today’s Raymond Cummings, who also is Splice’s de facto Noise Editor (and an excellent poet; seriously, go pick up his book).

The show was a double billing of Baltimore’s Andrew Bernstein (with MC Schmidt and Sam Haberman) and the Lak Wright Duo from Lowell, Massachusetts. Both acts are free improv, electroacoustic outfits but, not surprisingly, the respective end results were incomparable.

Bernstein and co. opened their percussion-based performance by playing the room—literally. The three men, each with a pair of drumsticks and/or mallets, began in three separate corners of the space, using radiators, water coolers, trash cans, book shelves, chair legs, walls and speaker grills as percussive media. They found pockets of rhythm in these unlikely places, and when they found their way to stage, the tympanum, floor tom and snare drum ended up sounding eerily similar—a seamless transition from improvised surfaces to formal instruments. The “real” instruments sounded no different from the found ones. Timbre is fungible, apparently.

Schmidt brought the performance’s only hints of tonality via a mason jar partially filled with water and held up to a microphone. By dragging it across a floor tom, he evinced what sounded like microphonic feedback—it doesn’t matter if it actually was feedback or not, though.

Rhythmically there wasn’t a whole lot of deviation from their quick clip. Variation came as a group, no one tried to pull away from the other two; the improvisation slowed down to its close with Haberman gonging the side of the tympanum with a percussion mallet—simple, comfortable. It didn’t feel like straight free improv as much as it felt like a temporary overlap of three percussionists finding communion in a small space. Aside from a few moments of eye contact and a couple of nods, there was little to no discernible communication between the percussionists. They were smooth, at ease with each other and with the space around them.

The Lak Wright Duo’s set was short and to the point. Stephanie Lak handled vocals and prepared guitar (meaning: a hollow body electric and harp laid face up, from which she elicited tones primarily with a bow and occasionally with her fingers). Walter Wright handled the percussion, and also spent some time with a basic circuit board. Their sounds coalesced and dissipated with patience and a controlled franticness. If the vast majority of popular music draws from established tropes and low-hanging narratives (I type this as I listen to Tommy Collins…), one could think of this kind of free improv as drawing directly from the air around us. Manipulation—such as when Wright evoked post-thunderstorm raindrops with his hacked circuit board—is more emotive, more direct, but the bulk of their performance seemed to be a more literal divination of the static and chaos that surrounds us, whether its traffic or gamma rays or entropy. None of it really makes sense since nothing makes sense until we impress sense upon it.  Wright’s electric raindrops were the only moment in the set where a sense of a grid emerged—a man-made delineation of space.

I mean: it’s not really possible to review a free improv show. You’re never going to hear what I heard, and I won’t hear what you’ll end up hearing, and even if we sat in the same room at the same time we’d hear different things, hatch upon different associations. That’s maddening, since finding commonality is so integral—at least, so traditional—to the musical experience. But as it were, the commonality here is the fact that we have ears that are able to process a decent variety of sounds—it’s the associations, the relationships between those sounds and our mushy neurons, that turns this sort of performance into a transporting event.