Why don't German musicians sing in their own language? 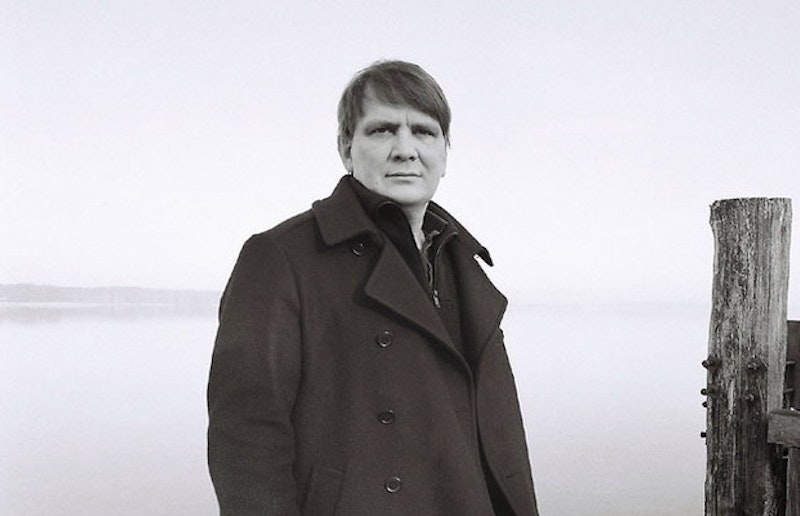 Working at a German radio station, I naturally listen to a lot of contemporary German music, but less than one might think: the vast majority of the music in our rotation is from the U.S. or Britain, and most of the bands from Germany sing in unaccented English. In fact, early on I noticed my German co-workers had an aversion to contemporary music sung in their own language. At first this seemed like the ultimate form of selling out; my colleagues were so completely brainwashed by American and British pop culture that they weren’t capable of recognizing quality in their own music.

But as my German improved, I started to pay more attention to the lyrics, and it became resoundingly clear that the Germans were right; most of the German-language music we listened to was terrible. I have the feeling this realization will not surprise many Americans, but before conclusions are drawn as to why, let me explain further.

There are a lot of light, indie-pop bands that sing in German about flowery and relatively superficial themes that work, more or less, in similar English-language pop. I’m not just talking about Britney Spears or Christina Aguilera: what are “Summertime,” countless other jazz standards and 99.9 percent of the blues about, but simple love and lust? Superficial lyrical content works in English, and not just for 13-year-old girls. But German lacks this flexibility. And so, specifically in the case of a lot of contemporary German-language indie-pop, there is the problem of someone trying to sing with the cutesy wordplay of Stuart Murdoch from Belle & Sebastian, or the simple lyrical grace and confessional romance of Van Morrison, but the wordplay and grace are all lost in translation.

I’m tempted to sell out my own language: to view German, the language of Kant, Goethe, Nietzsche and Hesse, as more elevated than English, and thereby incapable of lowering itself to the level of pop and one-sided love songs. Many Germans, anyway, view it as very difficult to channel their own language into contemporary music, and therefore approach German-language music with more demanding standards than they do English-language music. Whether or not German is more “elevated,” there is something serious and uncompromisingly abstract about the language, which seems to necessitate music that is equally so.

This seriousness doesn’t eschew the possibility of humor (back in January I wrote a piece about a hilarious German electro musician, Alexander Marcus). But humor in German music works best when it’s dry, even dark. Kraftwerk cashed in on this with 1981's Computer World, mixing angular beats and electronics with lyrics ranging from kooky (“Pocket Calculator/Taschenrechner”) to satirical and outright critical (“Computer World/Computerwelt”).

But when talking about contemporary music that has best brought out the highlights of the German language, novelist/singer/trumpeter/guitarist Sven Regener is the first name that comes up in most conversations, even though he started out singing in English. Regener is much more mild-mannered than the electro-geeks from Germany’s industrial north, Kraftwerk, or the coarse, abrasive Austrians, Kreisky, whom I will come to later. Together with his band, Element of Crime, Regener could be seen as something of a German Bob Dylan or Leonard Cohen, if Germans didn’t already think Bob Dylan and Leonard Cohen were gods. Regener’s perpetually chilled-out, somewhat dark poeticism and smoky, sing-speak vocals seem to connect with many Germans, who roll their eyes at the pathos of light German indie-pop sculpted in the image of contemporary English-language counterparts. His mix of melancholy and indifference lends Regener a sage-like, granddaddy image, and has secured his place on a pedestal ever since his successful 80s album Try To Be Mensch, produced by ex-Velvet Underground member John Cale.

The musical accompaniment to Regener's staid poise works best on Die Schönen Rosen: electrified rock drawing from all manner of folk musical traditions, with hints of gypsy, French chanson, Mexican and even American country influences. The existential hangover of "Wer ich wirklich bin" exhibits Regener’s lyrical and musical style on Die Schönen Rosen best. Some things—the rhyme scheme for instance—are lost in translation, but oh well. Listen to the song for that: “In my skull lives an animal that tramples everything short and small/what I'd planned/for a lovely long day/why move?/I wouldn't know where to/Sometimes I'd like to know/who I really am/In my throat lives an animal that eats the intelligent words/that I'd bent to my will/for a lovely long day/what should I say?/When I haven't got any words/sometimes I'd like to know/who I really am.”

Sven Regener is, as I hinted earlier, a reference point now in contemporary German music history, and the first of his kind. There are those, however, who find the stoic sing-speak tendencies of his many more recent imitators to be uncreative and uninteresting, especially when the lyrics lack the stark tones and dry observations to match (e.g. the Cologne band Locas in Love).  But there is a band that takes the tepidity of Regener's sing-speak singing to a new level of grating indifference and hungover brilliance.

Beyond their particularly dry tone, Kreisky set themselves apart within the German music scene via their distinctly Austrian/Viennese character. Both their self-titled debut and most recent album would've made great scores for the recent Austrian novel-turned-film Der Knochenmann (The Boneman): a murder mystery revolving around prostitutes, Bratislavan gangsters, a meat grinder, brutal murder, and a perpetually hung-over, Viennese ex-detective with a near-visible cigarette odor.

Aided by the harsh German nasal tones and scrapes, the lyrics on “Die Menschen Sind Schlecht” exhibit this best, sung with a ferocity that Ian MacKaye couldn't even match: “The houses here are still from before the war/and all the shit is a whole lot older/the few stars are also pretty dusty/and you can forget the moon/the street is long and the people are bad/in the stores the shelves are as good as empty/and the unemployed waiters/discuss soccer scores/though the last game/was a pretty long time ago.” Unlike Sven Regener, not much with Kreisky is lost in translation, considering there was no rhyme in the first place. My favorite song by Kreisky, “Vandalen,” is perhaps their only song with a little rhyme, but whatever harshness they lose as a result, they make up for in the words: “cannibals/Kannibalen” and “vandals/Vandalen.”

Few people speak German in the States. But there are enough people out there who can't speak Spanish or French, yet still freak out over Buena Vista Social Club, flamenco music and Edith Piaf. I also recognize that German generally doesn't sound as pleasing to the American ear as Spanish or French. Where French and Spanish have the refinement and smoothed-out edges of Piaf and flamenco music, German has Alban Berg‘s bristling 12-tone opera “Wozzeck” or Kurt Weill and Bertolt Brecht’s bellowing “Mackie Messer” (“Mack the Knife”) from The Three-Penny Opera.

But those classic 20th century works are great exactly because they embrace German's hard edges, because they represent the language at its most overpowering and penetrating, its most satirical and reflective. As distanced as Element of Crime/Sven Regener and Kreisky are from those works, their preference for German in a contemporary music scene dominated by English automatically establishes a line of relation, as does their gloomier stylistic preferences. Kreisky would probably laugh and say they play more out of their own crabby disenchantment than any desire to inspire it in others via a Brechtian “estrangement effect.” But the estranged sneer is there, through staccato guitars and a howling German whine, and it’s compelling.