White is Relic/Irrealis Mood is of Montreal's first progressive and immediately accessible record in years. 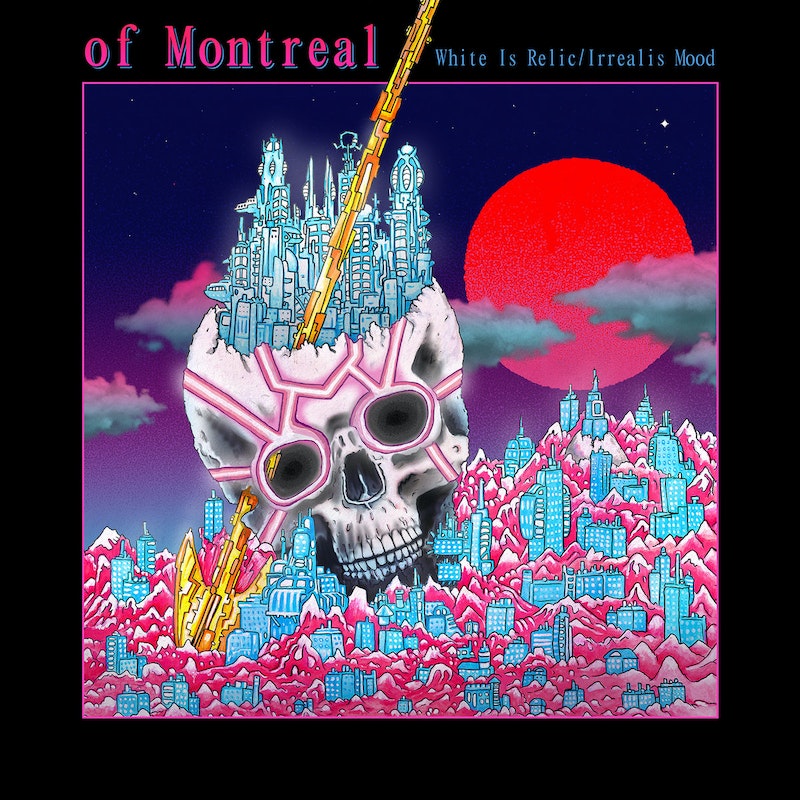 Prince didn’t have to die. I’m still stunned that Bowie and Prince—two pop artists who more than anyone else united people across nearly every boundary—died within three months of each other. But at least Bowie had time to make something out of it. For the rest of my life there will be yearly teases and occasionally releases from the vault at Paisley Park, with Warner Bros. reaping the rewards of a dead legend’s life’s work. I don’t see enough Prince tributes, unlike Bowie, who’s still got tributes pouring in and treacly covers of his songs synced in movies and commercials. Where’s the love for Prince? Are you studying his methods? Are you taking lessons? There’s a lot to cover.

I’m glad Kevin Barnes turned of Montreal into a dance band. I think it’s fun, and I’m all smiles. I’m smiling, I’m smiling now. White is Relic/Irrealis Mood, of Montreal’s 15th studio album, is 41 minutes and six songs long. Barnes said that, “Musically, I was very inspired by the extended dance mixes that people used to make for pop singles back in the ‘80s. It’s so cool how a lot of the 80’s hits had these really intricate and interesting longer versions that wouldn’t get played on the radio and could only be heard in the clubs. I used that template with these tracks, I wanted them all to feel like the extended ‘club edit’ of album tracks.”

Bands that never break up get forgotten. Barnes had a six-year hot streak from 2004 to 2010, and even 2012’s Paralytic Stalks will be reevaluated. But he lost me with Lousy with Sylvian Briar the next year. Boring garage rock with unbelievably awful album art. But the show I saw in May 2014—the first time I’d seen of Montreal—was amazing. Besides making Baltimore’s Ottobar feel like Madison Square Garden, and how Barnes held the room in the palm of his hand with ease, the collective energy of the audience was overwhelming, passing back and forth from stage to one massive outstretched hand swallowing Barnes during the climax of third encore “The Past is a Grotesque Animal.” Last year’s Ottobar show was great too, and it made me appreciate and listen to songs I’d neglected on release, especially “We Will Commit Wolf Murder” and “Let’s Relate,” a beautiful maximalist pop song that Skrillex would envy.

Opener “Soft Music/Juno Portraits of the Jovian Sky” is the only song explicitly about white guilt and gentrification. I think the racial and political angle of the album that blankets the press releases is a cynical marketing and publicity tactic, but at least Barnes owns up to his own career in cultural appropriation. The chorus: “Soft music drains the oxygen from besieged Bushwick streets reflexively retching Anglo influx though there will be no gentrification of graffiti warship of summer love.” A later variation: “White flight in reverse on the crest of their vaporware on intersectional highs […]/It’s hard to stop the impact of one’s offensive ways.”

Keep in mind this guy’s masterpiece is a concept album split about depression and transforming into a transgender black man named Georgie Fruit. Barnes could never get away with that today, but January 2007 was ages ago, and even though Hissing Fauna remains beloved, it’s as much a product of George W. Bush’s second term as Borat, which came out only two months earlier. Those Georgie Fruit songs, like “Faberge Falls for Shuggie,” “She’s a Rejecter,” and “Bunny Ain’t No Kind of Rider” are still show-stoppers despite questionable lyrics. Barnes doesn’t need to atone, but the angle on White is Relic/Irrealis Mood isn’t disingenuous: of Montreal’s most acclaimed work is full of white boy funk. This isn’t out of nowhere, he didn’t just start reading James Baldwin in 2015.

Ultimately none of that nonsense matters if the songs aren’t there. On White is Relic/Irrealis Mood, Barnes sounds like he’s finally comfortable writing in a musical idiom other than rock or pop after five years of searching and groping in the dark. “Plateau Phase/No Careerism No Corruption” is the highlight, a mid-career classic as progressive and tuneful as anything on the “imperial phase” records of the middle- and late-aughts. “Plateau Phase/No Careerism No Corruption,” like the rest of the record and Barnes’ body of work, is so sonically dense yet melodically focused, and I think the decision to make an album of extended club mixes was inspired, because these songs are immediate but they really reward repeated listening.

of Montreal’s EDM records bludgeoned the listeners with hooks and, like most of the music in that genre, wears your ears out pretty quick. White is Relic/Irrealis Mood feels like a Prince 12” or a white label dance record you could only hear in a club in the 1980s. I’ll allay any fears of the political angle overshadowing this record, because after so many years Kevin Barnes is back making progressive records that are more tuneful and accessible than overcooked and overly obscure.