A 60-minute EP shows his strengths and (mostly) downplays his weaknesses. 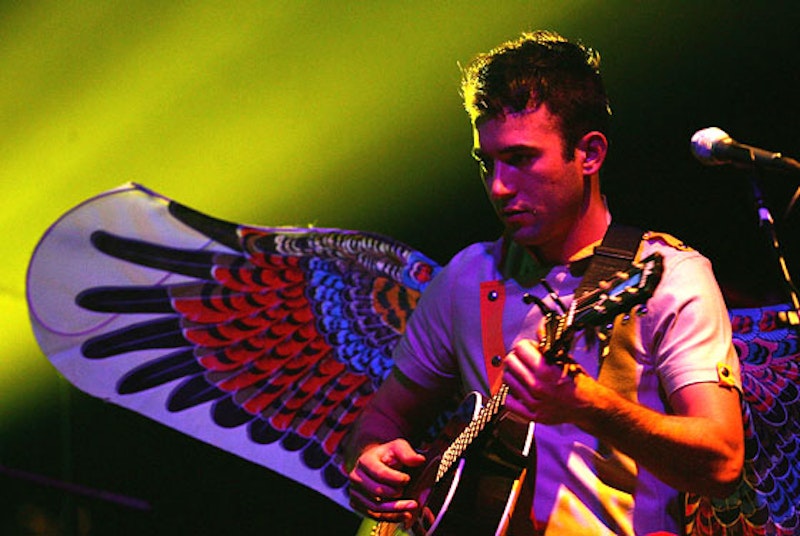 The Internet came alive last Friday with the news that indie rock fave/antagonist Sufjan Stevens had, seemingly out of nowhere, released a new EP, All Delighted People, available immediately for streaming and for sale on his website. That the “EP” lasts slightly longer than an hour—with one song passing the 11-minute mark and another stretching past 17—was the cause for some alarm, but the fact that it represents a return to actual, normal (for him) songwriting is a cause for joy.

Stevens’ last few outings have tested the patience of even the most committed Sufjanphile. Since 2005’s career-best Come On Feel the Illinoise! he’s released a batch of Illinoise overflow, a collection of new and traditional Christmas songs recorded over several years, and the simultaneously overblown and underwhelming The BQE, an all-instrumental salute to New York’s Brooklyn-Queens Expressway that merely combined Aaron Copland arrangements with Philip Glass tropes, garnished with the twee toy instruments that Stevens is so fond of using.

A lot of the good will engendered by Illinoise, which topped a number of “Best of ’05” lists, was frittered away by the polymath’s I-can-do-anything approach, while no small number of listeners started complaining about how all this extracurricular work was further delaying his stated project of recording an album for each of the 50 states; to date, only Illinoise and 2003’s Michigan have materialized. (For his part, Stevens told Paste last year that the project was nothing more than “a joke,” though the door doesn’t seem to have officially been closed just yet.)

A glimmer of hope came with last year’s Dark Was the Night charity compilation, where Stevens’ “You Are the Blood” showed that his sense of play, and willingness to indulge in flourishes of electronica, hadn’t abandoned him. Typically, the electronics are mostly absent from the new collection, but Stevens’ ability to work within traditional songwriting structures while simultaneously commenting upon their inherent restrictions has been thrillingly resurrected.

The title track, which Stevens describes as a “dramatic homage to the Apocalypse, existential ennui, and Paul Simon’s ‘Sounds of Silence’,” appears in two versions: The 11-and-a-half-minute original, which pitches together choirs, horn and string sections, skronky guitar, trademark banjo, and about a dozen other bits and pieces; and the “Classic Rock” version, which won’t be replacing “Baba O’Riley” on many stations’ playlists but does streamline the instrumentation and cut about 3:30 of the running time. Quoting the Simon song at key junctures, Stevens weaves a mesmerizing tale of fear in the modern world, belied by his sweet, cracking tenor.

For all its accomplishment, “All Delighted People” is topped by “The Owl and the Tanager,” a version of which has been a concert staple for the past couple of years. Centered around a hesitant-yet-insistent piano figure, the chilling tune that may or may not be about domestic violence; one of its key lines, “Dangling from the guilt,” helps establish its Flannery O’Connor/William Faulkner setting, both from a physical and a psychological vantage point.

Other tunes like “Arnika” (“I’m tired of life, I’m tired of waiting for someone”) and “Enchanting Ghost” recall Simon again, in his early, pre-cultural imperialist phase, while “From the Mouth of Gabriel” tosses in some flute and synthesizer blats to keep the rather basic tune from seeming too conventional.

Then there’s “Djohariah,” the 17-minute concluding rave-up that sounds like a Van Morrison jam from the Into the Music era. Fuzz guitar! Wah-wah effects! Wordless moans punctuated by grumbling horns and stinging Claptonesque leads! It finally settles into a relatively standard song, with vocals, after 11 or so minutes; decent, but only to prove that Stevens can still meander as the mood strikes.

It’s impossible to guess where he goes from here: making a film about Peter Max? A collection of Gurdjieffian sonatas? The proposed collaboration with Rafter on an album about California? Still, with All Delighted People, Sufjan Stevens is finally back on track.