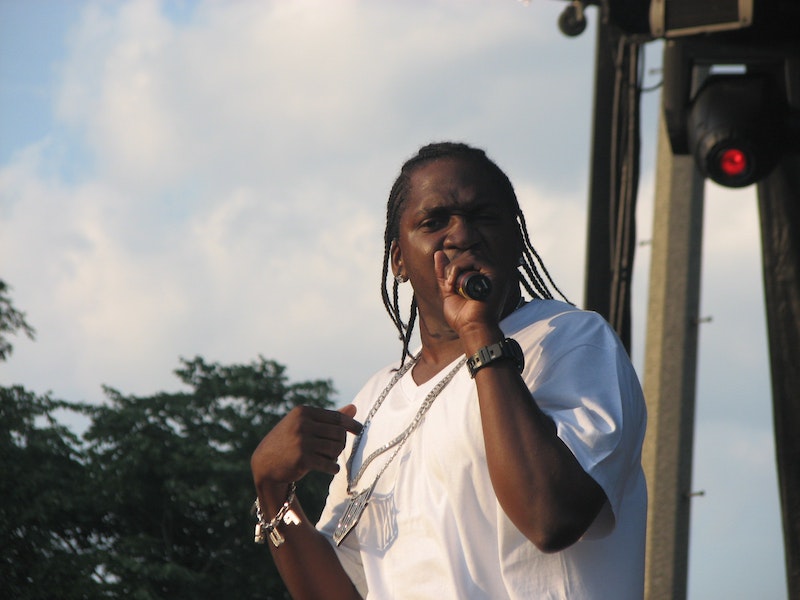 What a difference a year makes. Twelve months ago, coke-rap duo Clipse were preparing to drop third album Til The Casket Drops, where brothers/heartless MCs Malice and Pusha T (mostly) broke out of the Neptunes-coated pop sphere they’d been content to hustle in and waxed repentant and remorseful about their dope slinking pasts to the sound of no cash-registers ringing. For all intents and purposes, Clipse were done; subsequent guest spots intrigued no one and drew little notice. Malice started writing a book. Then, out of nowhere, Pusha re-surfaced under the wing of resurgent Taylor Swift-basher Kanye West, improbably signed to West’s G.O.O.D. music roster and set to issue a mix tape titled Fear of God. (That mix tape has been shelved temporarily, but its leaks are worth a listen.) It’s been surreal to watch couture dickhead West and cocaine-inspired Push—who worked together previously on Casket’s “Kinda Like A Big Deal”—vibe side by side on cut after cut, but we’re all living in weird, desperate times, when everyone‘s scraping to get a piece of the ever-shrinking pop-music revenue pie. But how is formerly uncompromising, underdog Pusha making out in the company of legendary, multi-platinum selling rappers who are making actual fuck-you money and relative nobody upstarts? Let’s have a look-see at his contributions to West‘s “G.O.O.D. Friday“ series so far:

“So Appalled”
Date Leaked: September 24, 2010
The Personnel: Kanye West, RZA, Jay-Z, Pusha T, Swizz Beans, Cyhi the Prynce
The Default Mood: Arrogant, chagrined hauteur.
The Beat: No I.D. and West cordially invite you to lounge around in a blinged-out, badly lit mausoleum with dudes in designer jerseys while they big-up themselves, exchange high-fives, and compliment each other on their Jesus pieces. For eternity. Forever.
The Dilly: Oh, no. The effort an MC puts into rapping shouldn’t show too much, because peeping the seams makes listening to rap a slog—which is exactly what happens here and on too many recent Clipse/Pusha. Those seams almost become or replace the verse, and eclipse anything good that might be said about them. Somebody needs to take Push and Mal aside and explain that self-mythological reiteration isn’t really a good look unless you’ve found a fantastically absurd new way of telling your clued-in fan base shit they already know about you. And every other rapper on this track outshines Push—even RZA, who more or less just shows up at the end to bellow the chorus like a walrus in cardiac arrest.
Oh, the Irony: I kept flashing back to all those potshots Clipse took at Jay a few years ago. But who says Jay and Pusha were even in the studio together for this, or whether Jay even remembered or cared? Jigga’s got bigger fish to fry.
Pusha T Pull-Quote: “Still move a bird like I’m in bed with Mother Goose.”
Pusha Grade: D-

“Good Friday”
Date Leaked: September 10, 2010
The Personnel: Kanye West, Common, Pusha T, Kid Cudi, Big Sean, Charlie Wilson
The Default Mood: Block-party chill, with everybody cracking jokes and drinking from red cups.
The Beat: Live-band looseness, vaguely funky, DJ-scratch strewn, with a piano melody that shamelessly rips off Biz Markie’s immortal “Just a Friend.”
The Dilly: Clipse proved they could switch from hard-as-nails nihilism to carefree, upbeat cheer with “I’m Good,” and Push slips back into that mode here with disarming ease. At the end he succumbs to an unquenchable urge to self-mythologize, sure, but not enough to harsh everybody else’s mellow. West raps conceptual circles around Push, but it’s not a big deal because West raps circles around everyone on this cut.
Pusha T Pull-Quote: “As ‘Ye flips the piano. the mood swings like the change of a channel/He’s heating up like they wrapped him in flannel, sellin’ kilos through your iPod Nano.”
Pusha Grade: B

“Runaway”
Date Leaked: debuted at the MTV Video Music Awards on September 12, 2010
The Personnel: Kanye West, Pusha T
The Default Mood: Championship douchebags getting all misty-eyed and sensitive. (Maybe.)
The Beat: Marital click-track blurred-synth minimalism/miserablism, courtesy of West.
The Dilly: Now this is more like it; effortless, light-of-touch rhymes about being a moneyed drug-kingpin asshole—more specifically, a moneyed drug-kingpin asshole indoctrinating a new dewey-eyed squeeze into the harem, basically—that break like buttery, flaky hot biscuits. This is the level Push should be working at all the time, where his part of a song is seemingly over before it’s begun and the listener is left wanting more. A nice contrast to West’s more rueful, not-quite-chastened playa persona here.
Oh, the Irony: Apparently, West really does send girls pictures of his dick, just like in the song. Ayo, technology!
Pusha T Pull-Quote: The whole thing is a masterpiece, really.
Pusha Grade: A

Christian Dior Denim Flow
Date Leaked: October 2, 2010
The Personnel: Kanye West, Kid Cudi, Pusha T, John Legend, Lloyd Banks, Ryan Leslie
The Default Mood: The day’s long, stoned journey into night, or “the triumphant show turns into the after-party which begets a Patron-fueled ménage a trois in a leased Bentley,” or “someone slipped me a ‘lude in the VIP,“ or something.
The Beat: Drum-kits and fake string sections knit a groove that, disconcertingly, becomes more swampy and syrupy as the track progresses, by West.
The Dilly: Like his brother Malice, Push typically sounds terrible rapping over slow or sluggish beats, so it’s a minor miracle that his raps on “Denim Flow” manage to pack any kind of punch. (Also, he surfaces early on in the lineup. Lucky bloke.) Versatile spitting about backing West at the VMAs, cocksure boasts, pithy fashion shorthand: basically, we get Pusha T rapping with offhandedly about how much fun being Pusha T is. Whenever his G.O.O.D. Music solo debut drops, let’s hope this is the Push we get on it.
Pusha T Pull-Quote: “Six grand for a minute’s time/Italian Vogue styled a nigga for a minute rhyme.”
Pusha Grade: A+