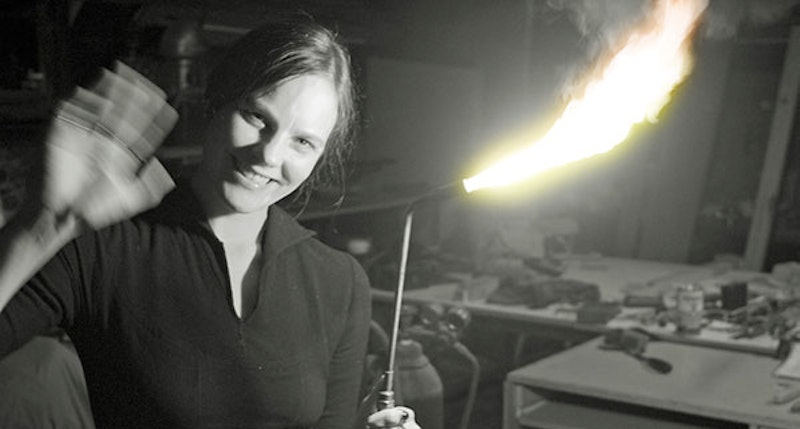 Since her 2001 split 7" with Songs: Ohia, Scout Niblett has been putting out minimalist indie folk that runs nicely along the early Cat Power axis: nothing but a Fender Mustang (inspired by Kurt Cobain) and a distortion pedal, with the occasional drummer or piano backing. Niblett has earned a dedicated following, and found a not-so-surprise hit with 2007's "Kiss," a heartfelt duet with Will Oldham. Her lyrics are known for their dark and painfully honest introspection, and often follow the same simple structure as her songs—the howling refrain, "We're all gonna die!" on the b-side "I'll be a Prince," for example.

Her new album, The Calcinations of Scout Niblett, out now on Drag City, is her first since 2007's This Fool Can Die Now, and though upon first listen the two albums don't stray too far from each other—minus Will Oldham of course—Calcinations is an important move for Niblett, no doubt thanks in part to her continued collaboration with producer Steve Albini, known for his inspired work with Nirvana, Pixies, Mogwai, Manic Street Preachers and on and on.

"Just Do It" opens the album with some slow fuzzed out guitar tapping riffs before turning into a fairly typical (albeit excellent) Niblett slow-burner, a subdued sound that carries over into the album's second track, "Bargain." But it's the raucous guitar wail of "Cherry Cheek Bomb" that really sets the tone on the album: perhaps angrier and more aggressive than anything Niblett has done before -- fiery is no doubt the word, as the album's title refers to a kind of purification by fire. As Niblett told Jessica Lewis in a recent interview for Round Letters:

I think the main bulk of the album was realizing I was going through a transformation of sorts, where I’m basically looking at myself in a critical way to try and work out what parts of myself are kind of dysfunctional so that I can sort those out. I’ve been reading a lot about psychological alchemy and the way that you have to really look at yourself for a change to happen and you have to deal with your shadow and the dark parts of yourself that you don’t really want to look at ... You are literally putting a fire under you; you’re bringing a light to your personality to really kind of dissect it and look at it.

Niblett's esoteric reasonings aside, Calcinations surely holds together better as an album than This Fool Can Die Now, and will no doubt remind the listener more of Fiona Apple than anyone else. Calcinations is harrowing and exhausting and beautifully complete as an expression of Niblett's power as an artist: perhaps best summed up in the nine-minute album closer, "Meet and Greet," a song about the frustrations of music and touring, which drifts from ambient droning guitar to crescendos of clanging drums and distortion. In the end it's a difficult listen, but a thoroughly rewarding one.