Brooklyn songwriter takes the freak out of his folk and starts to actually entertain. Catch him on tour. (Grade: A-) 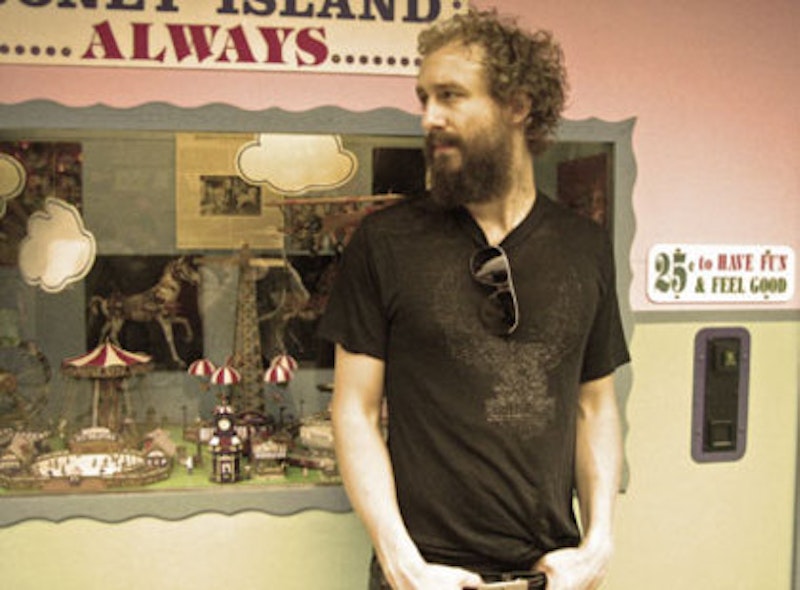 I remember driving around back in late 2005 listening to Aw Come Aw Wry, Phosphorescent's second album and their first to make a mark in terms of sales or press, and wondering what to do with an album that has a few really good songs (smart-lyric alt-rockers like “Joe Tex, These Taming Blues," "I Am a Full Grown Man," etc.) but that tries way too hard to manufacture the under-rehearsed “fuck it, just bang on this pot, let's get it recorded” aesthetic—a couple out-of-tune guitar strings here, some amp feedback there. Did I just hear a screen-door closing?

Not that I have a problem really with a minute-long song of haphazard drums and Matthew Houck yelling "Aw Come Aw Wry" over and over again, but I do have a problem with three songs like that on one album. Which takes us to the fact that although Aw Come Aw Wry runs for just under an hour, almost half of that time is taken up by aforementioned Oldham-like "Come a Little Dog" throwaways, the choral droning of "Endless, Pt. 2," and, yes, more than 18 minutes of rain and various street sounds for the album closer, "Nowhere Rd., Georgia, Feb. 21, 2005," which on a slow alt-folk record is kind of like Houck saying, "Alright, I'm just not sure they're asleep yet, let me go all out on this last one."

All of this is frustrating because it's obvious from a song like "Joe Tex, These Taming Blues"—where Houck's voice breaks with troubled honesty as he sings the opening verse: "Is it ever gonna not be so hard to see you around?/Am I really really really really gonna have to really gonna have to really have to leave town?/I mean I called upon a bunch of angels calling angels ain't you supposed to come and take away these blues?"—that Houck is a terrific songwriter and musician. "If only he could break out of the Oldham folk artifice," you find yourself saying, which is exactly what he did on his 2007 follow-up, Pride.

Before I get to that album, and what makes it so much better than Aw Come Aw Wry, it's probably necessary (since I've now mentioned him twice) to talk about the obvious comparisons to Will Oldham. This is not something I really want to do, since Pitchfork's William Bowers review of Pride does such a fine short-shrift job of telling everyone pretty much "Get over it": "My point: I don't put much stock in Jungian collectivity, but nobody gets to monopolize this archetypal shit. Oldham and Beam were both called copycats of their ancestors when they dawned, and 'tis time to afford Houck the respect that their work has since earned.” This may be the first and only Pitchfork review in their 10-plus year history to offer such humble forgiveness.

Let's be honest: Aw Come Aw Wry doesn't just kinda-sorta-maybe sound like an Oldham record; it could have been an Oldham record. Houck sings like Oldham, he writes songs like Oldham, he plays songs like Oldham—but on Pride he does it better than Will Oldham ever did (with the exception of Viva Last Blues, which I won't get into here). As Bowers even brings up (sarcastically, maybe, but he's right), the cover of Pride looks an awful lot like Oldham's Days in the Wake, which I like to think of as a subtle FUCK YOU to critics who kept calling him an Oldham rip-off. I would probably be one of those critics myself, if I thought Days in the Wake or I See a Darkness were great albums, but I don't. They have some great songs, but they're about as mediocre as Aw Come Aw Wry—that is, in the end, they're just too god damn boring (just admit it, you can't sit through all of "Song for the New Breed" either).

Which is not a problem on Pride. Because on this third LP, Houck has done pretty much everything right, with a lot of back-up help: Jana Hunter offers vocals on "Wolves," for example, a song that sounds the most like the old Phosphorescent, with some subtle but significant differences that mark Houck's artistic maturity: had this song been on Aw Come Aw Wry, for example, it wouldn't have been played on ukulele; it would been crowded with horns, not backed by accordion; you wouldn't have gotten the heavy reverb and distorted feedback guitar solo in the break, ditto on the light harmonic effect during the verses.

Everything is altogether more focused here. Houck may tend too much towards a kind of tribal psych folk on some of these songs ("Be Dark Night," "Pride") for my liking, but at least he doesn't drift off into, say, the unaccountable minute-and-a-half organ riff you get at the end of Aw Come Aw Wry's "I Am a Full Grown Man"; the kind of thing that makes you think, “why is this song still going on," and, after two or three times through, "why did I buy this album?” He also puts his chorus and back-up singers to better use, a group that includes the (previously-mentioned) Jana Hunter, as well as Annie Palmer, Liz Duret, Ray Raposa (Castanets), and Dave Longstreath (The Dirty Projectors); all can be found on the beautiful story-song "My Dove, My Lamb." Houck also does some beautiful layering of mix-recorded vocal harmonies on "A Picture of Our Torn Up Praise," and works in maybe four or five more instruments without losing track of song structure; that's what good production will do for an album.

Early versions of "Cocaine Lights" and "A Death, A Proclamation" can be found on Daytrotter. And if you're in Baltimore tonight, you can see Phosphorescent at the G-Spot Gallery in Hampden. I'll be there. Buy me a beer (or four) and we'll argue the finer points of I See a Darkness. Two more upcoming dates, one in Philly, one in Brooklyn, can be found on Myspace.