Concerts may be "back," but everyone is still uptight and anxious, and no one wants to admit it. 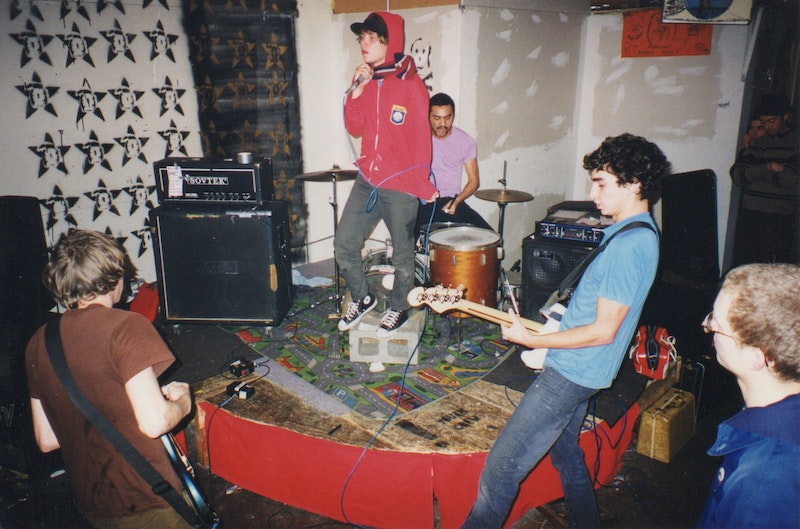 Last Friday the police showed up to Current Space’s Human Host show. There were about as many BPD officers on the scene as there were audience members, the result of an angry neighbor who made a noise complaint. The Baltimore Police showing up while a masked weirdo in a multi-colored dreamscape plays synth for a dozen other weirdos in a warehouse backlot? Noise shows are back, baby.

The Current Space proprietors quickly produced the necessary permits, and the show continued uninterrupted. Six days later, I’m standing at the Current Space bar again, this time for the much-more crowded Black Dice show, and I joke to the space’s co-director/bartender for the evening Julianne, “Where are the cops?” She doesn’t look amused. We both rap our knuckles against the hardwood bar (a newish addition to the Current, erected almost exactly where Lil B once took stage) in some pointless gesture to the noise show gods.

I’m wandering the scene, beer in hand, unsure of whom to talk with, failing to find anyone I know too well. About three-quarters of the audience are wearing black. I’m conspicuously dressed in a bright green, pink, and blue nylon jacket, a topic that my friends and I return to throughout the night, this questionable choice of attire falling somewhere between late-aughts blogwave fashion and an old woman getting her steps in at the mall.

The first band starts, and I see people more prepared than me stuffing their ears with orange foam earplugs. This reminds me of a recent episode of Curb Your Enthusiasm, in which Larry and Jeff offend a Hollywood multihyphenate by plugging their ears with tissues during his awful performance of the Presidents of the United States of America’s “Peaches.” (I wonder if Larry knows that earplugs are the norm for heads these days?) As these thoughts tumble inside my head, two more get thrown in for good measure: one, who is this tall blonde woman stalking around in front of the stage with her hair in front of her face?; and two, who the fuck is on vocals right now? I survey the band onstage, all of whom look stoic behind their guitars and pedals and synths, none singing. I discover midway through the first song that the blonde woman is the vocalist. I feel like a fucking idiot, even more so when I recognize her as Rozie Jordan, Baltimore scene lifer and one half of Smile Lines (with Deerhoof’s Greg Saunier).

Jordan lurks—her platform boots adding a few inches to her already towering stature, locks of hair muffling her laconic metal singsong—and Thirst Church’s music has its way of lurking too, the kind of insidious doom rock that worms itself into the ears of even novice heads. The genre is hard to place at an outdoor show like this, where the sound bounces off the downtown buildings, a setting where the only real genre is Loud, but it doesn’t really matter. Troubling oneself mid-set with the question of genre is like being the asshole who asks about a wine’s provenance. Just shut up and drink it.

Thirst Church’s set ends and I’m once again standing in the middle of the venue, looking around, praying someone I know will come along. This doesn’t happen. The temperature is dropping, and this Cobrasnake jacket isn’t doing much. The street lamps light the nearby trees, November holdouts whose stubborn greens are finally giving way to canary yellow and bruise burgundy. I’m reminded that we’re entering the second winter in a row in which our need to socialize is pitted against our need not to freeze to death.

With a renewed sense of urgency, I decide to have a good time, so I do what any American does: buy some shit. Eric Copeland of Black Dice sits behind the merch table. I ask how many copies of Big Deal he has left. Five, and he says that might be it for a while due to the current supply shortage. I buy a record and a shirt using a QR code, and I remark that I’ve never used one of these things before, that they intimidate me and make me feel old. I feel a little stupid saying this to Copeland, almost a decade my senior, but he’s very nice. I want to tell him Big Deal is an all-time party record, “Louie Louie” for people who cut their own hair, but I wisely just say thank you and tell him it’s one of my favorites.

I put the record on the floor of my car (that’s the cool thing about Black Dice album covers: they camouflage against soda cans and crumpled-up flyers) and return just as Godcaster starts their set. They’re interesting, a large band with some prog influences, some no-wave; one song lifts liberally from “Can’t Take My Eyes Off You.” I want to like them, but I’m a little turned off by the theater geek, dude-in-a-cape energy. (Speaking of dudes in capes, Twig Harper is here.)

Godcaster plays for what feels like an hour but is probably half that. The set ends, and a few friends and I commiserate about our office jobs. (Talking about having to wake up the next morning is a major part of going to shows in your 30s, even though these events end earlier and earlier now; the cutoff time for tonight’s event is 10 p.m.) Am I having a good time? If I need to think about this question for more than a few seconds, the answer is probably no. I’m in a comfortable, familiar environment with friends, waiting to see one of my favorite bands on a crisp evening during my favorite season. What’s missing?

I go to the bathroom to pee. I’m standing at the urinal, which is close enough to the stall that I’m pretty sure the gentleman exiting can see my penis. Black Dice starts to play, as loud as ever, so I shake quickly and get back out there. The following is what I think of while I watch their set, in no particular order:

—Aaron Warren: this guy is like one of those inflatable men outside car dealerships. Every time I’ve ever seen them, Eric and Bjorn are so composed, so focused, while this wild man is bouncing around like a pinball. He reminds me a little of Garth in Wayne’s World; not in appearance, but the way he bounces is very Garth.

—Black Dice’s polyrhythms have a way of enveloping you: I focus on one beat and another one pulls me in like a riptide. I try to think of a good metaphor for submitting to so many rhythms like this, and the best I can come up with is sinking into one of those pools of foam that they have in gymnastic gyms. I used to wait for my sister’s gymnastics classes to end, fantasizing about jumping into the pool of foam. I never actually got to jump in, but I imagine it’s exactly like seeing Black Dice live.

—What if they replaced Aaron Warren with John Olson and called themselves Eric, Bjorn and John?

—I think I’m having a good time. I consider getting another beer but opt for a key lime La Croix instead. It’s true that the increasing abundance of La Croix at live shows is a sure sign of the scene’s gentrification, but sometimes I want something bubbly and hydrating, and given these criteria, key lime La Croix is second only to a few other cans of seltzer (grape Waterloo, peach Waterloo, and maybe black cherry Polar).

—Pretty sure these are mostly songs off the new album.

—The first Black Dice show I went to, they didn’t even play. This was 2008, I think, at the now defunct Annex building. It was one of those classic summer Baltimore shows, around 200 sweaty people packed into a musty warehouse space with only a couple if working toilets and limited toilet paper, which never happens anymore. (Now most of the old warehouse spaces in Baltimore have been refinished and sterilized, their stick-and-poke covered inhabitants replaced by upwardly mobile creatives with cars, whose bumpers advertise the most condescending slogans, e.g. “Baltimore: Actually I like it”. The Copycat building continues to gouge its tenants for the privilege of squalid living but has more or less banned live shows.) Black Dice were one of several bands set to play that night, and everyone was amped and ready to rage. But sometime around two a.m., while Sewn Leather performed his classic “Smoke ov the Pvnk,” the police arrived and shut everything down. It occurs to me that we’re currently experiencing something of an inverse to those times. The show spaces are clean and finished, with a legal bar, and permits are in order. Whatever clouds of smoke waft around the venue are no longer a criminal offense. And yet no one seems amped. No raging. We’ve done this before. We watch the band we like, and when it’s done, we take out our ear plugs and go home.