An interview with the Portland band about their unorthodox recording schedule for a Woody Guthrie cover. 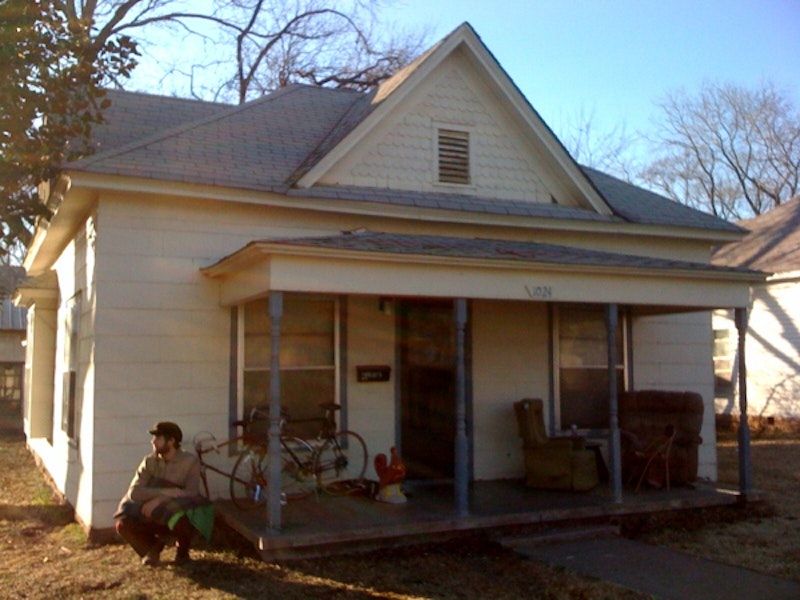 Of all the artists on Splice's Old Lonesome Sound folk compilation, Musée Mécanique, who covered Woody Guthrie's "Ain't Got No Home in this World Anymore," no doubt undertook the most unusual recording process. While on a cross-country tour, the band added various instrumentation and back-up vocals at stops along their tour route—including in Stillwater, Oklahoma, only a couple hours outside of Guthrie's hometown. I talked to Sean and Micah from Musée Mécanique about how the song came together, and they were kind enough to share some photos from the road.

SPLICE TODAY: How did you decide on "Ain't Got No Home"?

SEAN: Well, when we first were asked to be a part of the compilation, it was the first song that came to mind probably for two reasons: one, I already knew it and two, it fit the "Old Lonesome Sound" pretty well, it being a song about the hard times of the Great Depression era Dust Bowl.

ST: How much of an influence is old folk music, and Guthrie in particular, to the sound of the band?

MICAH: It's an influence as much as various other forms are. I really love, in particular, the lyrics of those tunes and how they tell very simple but universal stories. They are easy to connect to and really have a way of making you think about concepts very naturally. Woody is a master of that and I've appreciated the way he uses words since the first time I heard him. It comes through in the sound of the band sometimes in the sense that old folk music is a building block on which a lot of our songs have been built. We've dressed them up a bit with arrangements and non-traditional instrumentation but many of them, at their root, are just simple folk songs.

ST: You were on tour when you were recording this song, right? Can you tell us about arranging and recording the song?

SEAN: The idea to record it on the road seemed apt. To be traveling around the country, literally without a home helped us to define our take on our performance, arrangement, and recording.  When we're in a new town among a new set of people day in and day out, just making ends meet, constantly upsetting any sort of individual routine, and watching the landscape change, the political perspectives shift, and the effects of the modern global economic blows in each town, the lyrics of the song become pretty relevant.

The song's arrangement and recording were really haphazard and as a result, they were entirely integrated. We only had as much as a couple hours and as little as 30 minutes to set up and record different parts of the song in friends' homes along the way, quickly navigating their individual recording setups and laying down whatever instrumentation we could. Having to make it to a show and town each night there never really seemed "enough" time but it was the sort of undertaking that required embracing those limitations of time and place. We did what we could and on at least one occasion, we left empty-handed.

Though it was constantly directed by circumstance, we were fortunate enough to be able to throw it all into a laptop and do some a few edits here and there while in the van.

It was always fun to ask around when we arrived in a new town to see who might be into letting us use their studio—there was never a negative response. Even when we had to wake at dawn to lay something down, people were more than hospitable.  Always a great exchange.

ST: Were there other versions or covers of the song that influenced you? I did some looking around and the song has been done by a lot of well known artists: Beck, Billy Bragg, Springsteen.

SEAN: The first I heard this song was actually about ten years ago and it was the Springsteen version on a Folkways comp. Not my favorite version by any means, but it piqued my interest in Woody Guthrie. Maybe that's one of the best things a cover can do. Good job, Bruce. Hearing Guthrie's music was a great awakening, and especially inspiring considering I was immersed in the walls and confinements of the academic side of 20th Century classical music during my studies at college in San Francisco. It's so pure, and his life! Did you know that his mother was an arsonist and set different members of his family on fire? Wild.

ST: Who played on this song with you? Wye Oak added some instrumentation and helped do some mixing, right?

SEAN: Yeah! "The Wye Oakies." Andy and Jenn are friends of ours. Somehow they let us barge into their place and make them food at their place in Baltimore in exchange for a few hours recording between shows in D.C. and Brooklyn. Andy from Wye Oak is the famed ten-note cameo banjo player. Not bad eh? You knew he could play a full kit and basslines and sing at the same time, but did you know he plays a mad banjo too?!? We tracked some final bits there and made a mix of the song. We were super thankful that we could stop in.  A pretty good deal, we thought—breakfast for a mixing session.

ST: What are you up to now, after this latest tour?

MICAH: We are busy. A lot of touring. Sean and I have been on the road as Laura Gibson's backing band and for the next 4 weeks MM will be supporting her. A delightfully folky package, no? Then, we will be home in Portland, writing and recording the next record and an EP and just enjoying the summer at home. I think we are all very much looking forward to that.

And here's a list of places and things we recorded in those places:

Santa Fe, NM - We started things off visiting with our good friend Brian Mayhall (from the band D Numbers), tracking the basic transistor organ and some scratch vocals (couldn't quite remember all of them at the time) after learning (for too many hours) how to use Cubase in his home studio.

Austin, TX - After crashing at his house, Danny Reisch (of Belaire and The Lemurs) set us up in his rather professional home studio to track Matt's drums and Brian's lap steel. Danny had some nice condenser mics and some pretty high profile mic pre's that kept a nice contrast to the little lo-fi Yamaha keyboard's transistor organ patch.

Stillwater, OK - Not too far from Guthrie's hometown of Okemah, OK, our friends (of Payola) let us use their Mbox for recording Jeff's bass and Micah's guitar. Borrowed their Fender Deluxe and their bass amp and threw on a simple Shure SM57 mic. We made up the parts on the spot.

Williamstown, KS - Joshua Browning keeps a studio in an old church in a very small, old farm town just outside Lawrence. We were up at the crack of dawn to record vocals after a night of fun with our friends in Cowboy Indian Bear. A feat impossible without a stop for coffee on the way out. It felt pretty transcendent to be tracking all this music in dusty old farm towns in the Great Plains.

Baltimore, MD - Micah recorded vocal harmonies to his little iPhone 4 track outside of Andy and Jenn's house while some more keys, the famous banjo line, and some lap slapping were all tracked inside with their home studio setup. After breakfast we rushed to barely make our show

Portland, OR - Having just arrived home, we mixed and mastered at home the morning before a very welcoming final homecoming show with M. Ward.