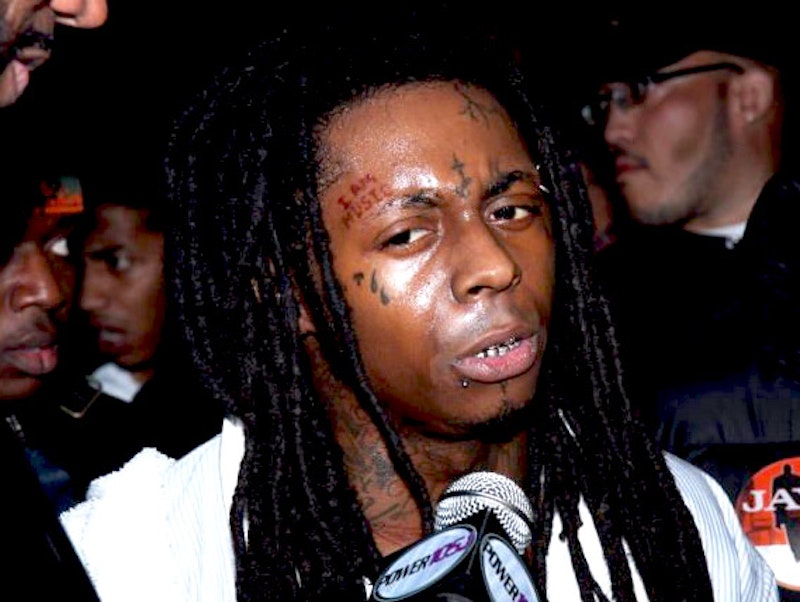 Finally! Definitive proof that Lil Wayne isn’t a shadow of the man every white rock critic once claimed he was. His latest, Tha Carter IV, is an embarrassment, an unfunny joke played on no one at all. To say it’s a mess would be an affront to all just spills, stains, and blemishes out there without a fighting chance. Lil Wayne is one of the most famous rappers alive and this is what he came up with? It actually makes me angry how punishingly mediocre and uninspired this release is, considering how much undeserved leeway the media gives this idiot. Lil Wayne isn’t a genius, and he’s certainly not an artist—he’s a schmuck with a microphone, leaning into nothing.

Tha Carter III was a great record for what it was—pop party anthems, with a lot of interesting and silly lyricism that didn’t say much but certainly was wacky! “A Milli,” “Lollipop,” and “Got Money” are all pop classics, but to say this guy was ever anything more than a passing curio is insane. I’ve seen the work he put out through ‘05-‘08 described as his “Untouchable Era,” as if Weezy is fucking Mozart or Chopin. The dude put out some good pop and spat (Hey look! I can use street terminology and still look like a massive douchebag!), some crazy stupid verses, but he never reached the heights of Nas, Biggie, or Wu-Tang. And of course most of the praise of Wayne’s lyrics ranges from half-hearted to shameless ironic enjoyment, so bad it’s good. That’s fine, but being ironically interesting isn’t even close to being an actual artist.

“Well if life is a bitch, then mine’s a gold digger/Yea and my bitches nasty like cold dinner/Everyday I go so hard and work my ass off/I’m good, I’m 100, I’m like a fastball Carter IV.” Tell me this isn’t the work of something drinking lean by the bucket. Fuck you, Lil Wayne. You have millions of dollars, legions of fans, freedom from prison, and one of the most anticipated albums of the year, and the best song on your record is the single that came out almost a year ago. “6 Foot 7 Foot” is another great pop song, but the rest of this mess is filled with boring, bland beats and even more vanilla braggadocio. There are only so many ways you can write the same I AM BETTER THAN YOU verse, and Wayne has run dry. The most infuriating part is that he’s so clearly not even trying. He doesn’t give a shit about his fans; clearly they mean nothing to him if he expects them to believe this a labor of love worth paying for.

It shouldn’t be a surprise, we all knew this was coming. The media’s infatuation with Wayne made it seem like he was capable, even on the way to making the next Illmatic. But that’s asking a lot—I would’ve been perfectly happy with another Carter III quality record. On Tha Carter IV, Wayne shows who he truly is: an airhead, a ditz, a drug addict with money to burn; and simultaneously, he proves every critic wrong. Lil Wayne is a joke, and no one’s laughing.