Biophilia sounds less like a Bjork album and more like the soundtrack to the 30 year old BBC miniseries LIfe on Earth. 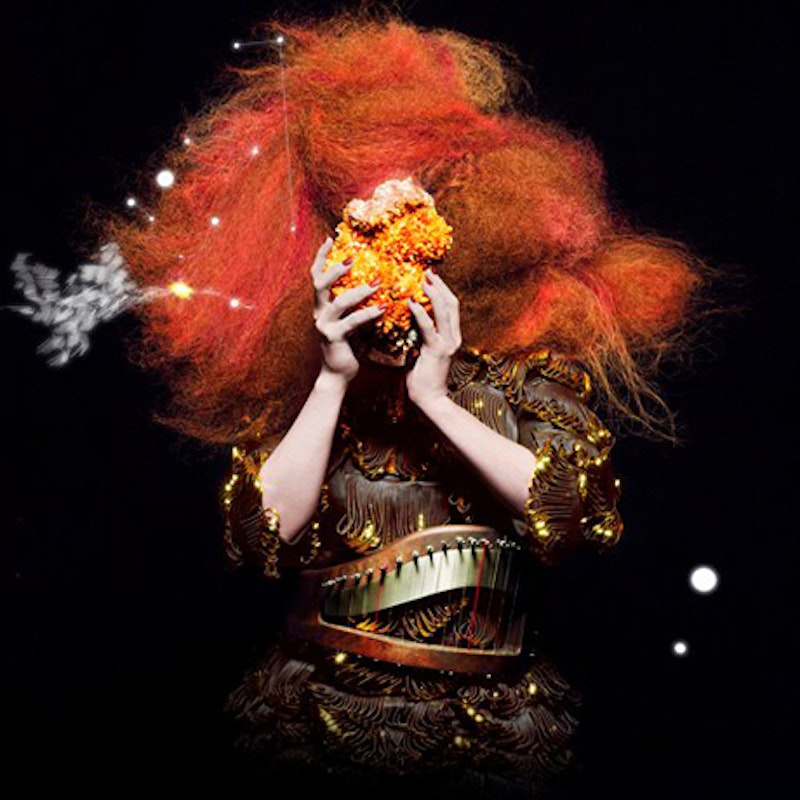 Bjork is Bjork. Over the years she's become one of those artists who is a genre unto herself. Though she's got connections to the fey new folk movement and links to the fey end of New Age electronica and an affinity for other fey Icelandic post-rock romantics like Sigur Ros, the truth is that when you listen to any of them and Bjork, she becomes the meme and they become the iteration. Or, to put it another way, they all sound like Bjork more than Bjork sounds like them. You can compare her to whoever till your hair turns pixie polycolors, but Bjork is not post-rock folk electronica. She's Bjork.

Which is why her latest effort, Biophilia, gave me a start. Not that it's different from her past releases—if you've heard Vespertine(2001), or Medulla (2004), or Volta (2007), you've got a good idea what to expect from Biophilia. It's just that all of a sudden, the Bjork sound didn't sound like Bjork. It sounded like Edward Williams' music for the David Attenborough mini-series Life on Earth.

What made me think of Williams' quiet, Debussy-like score are no doubt Biophilia's lyrics. You can get the gist from the song titles: "Moon," "Crystalline" and "Solstice."  The album is post-rock folk electronica for the natural world.  You listen to its plangent blips and murmurs and visualize plants opening or birds' wings beating in motion so slow you can see each feather shudder. Nature, in Bjork and Williams, is figured as a series of disturbingly vivid tableau arranged for uncanny contemplation.  At the beginning of "Hollow," the echoey, arthymic keyboard sounds patter forward, then pause, then patter forward, then pause, like a small furry creature scuttling across the ground towards food. "Moon"'s plucked lilt could be the background for a butterfly slowly coming out of its cocoon. "Thunderbolt" is even more explicit: "Staring at water's edge/Cold frost on my twig/My mind in whirls/Wandering around desire/…Craving miracles." Then at the end of the song, the electronics start burping like a series of frog calls. Suddenly Bjork isn't Bjork. She's library music for a nature special. How did that happen?

"Virus" seems like an attempt to explain the process. "Like a mushroom on a tree trunk/as the protein transmutates/as I knock on your skin/and I am in," Bjork sings in her usual hoarse, soaring precious diva style as the music drips and clinks, water falling on chimes. Nature is both a smooth vision on the eye and an ominous visitor moving under the skin. Nothing is really itself. "My sweet adversary," Bjork calls her lover/disease, as the distanced music and its surface prettiness turn her into an aestheticized transient shadow. If you watch nature, and nature is you, then you are both inside and outside, a ghost infection haunting yourself. At that point, you can hardly be surprised when you become something else, even if that something else is a 30-year-old BBC miniseries.

Or, for that matter, an up-to-the-minute pomo marketing endeavor. Biophilia is as detached from its identity as Bjork is from hers. It isn't really an album so much as a nexus for related products, including a series of apps for every song and a range of multimedia live shows some of which, apparently, include National Geographic imagery. Still, as I lack the funds, the technology, and the interest to pursue the album through its metastasizing iterations, I'm happy that my brain has instead decided to attach the soundtrack to my own hazy memories of creepily perfect nature specials past. I hate to admit it, but Bjork as Bjork was beginning to get a little boring. Bjork as mushroom with David Attenborough narration, though, is a thought to cheer every phylum.