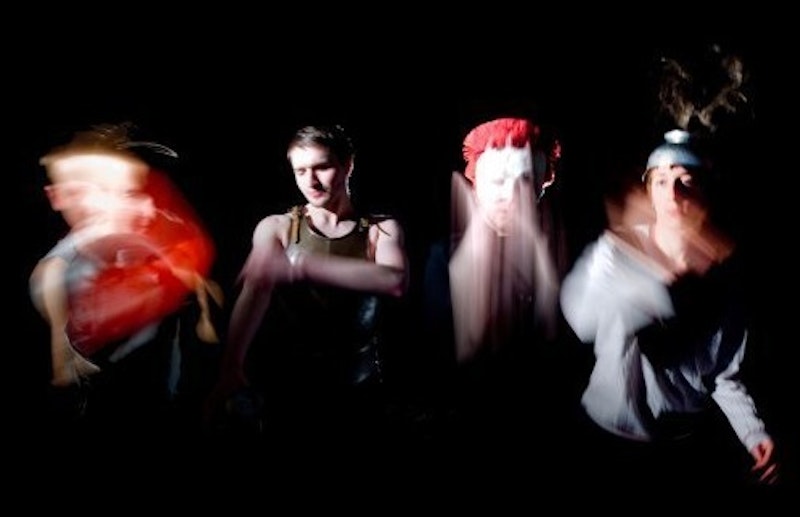 Wild Beasts, an art-rock quartet from northern England, will be making their American concert debut in about a week, at this year’s South By Southwest conference in Austin, TX. Despite possessing an immediate, propulsive sound that belies their young ages, Wild Beasts likely won’t stand out at the hype-centered industry festival; quite simply, this music needs to be absorbed and thought about to make sense, and might not translate in an environment that thrives on PR-ready acts and live-blogging journalists.

They certainly deserve the coverage, though. Limbo, Panto, the group’s first full-length, was one of the most exciting records I heard in 2008. A mixture of dramatic musical styles—English music hall, disco, punk, afrobeat—and evocative, fractured lyrics, the band is nevertheless a traditional guitars-bass-drums lineup that can streamline those influences into a coherent, recognizable vision. It helps that they’re also anchored by two truly unbelievable vocalists; Tom Fleming plays bass and sings lead in a disarmingly full-sounding low tenor, while main songwriter Hayden Thorpe attacks his lyrics with every vocal tool at his disposal—razor-sharp howls, woozy falsetto, or yearning screams. It’s hard to express the appeal of a band this strange without sounding too much like a doe-eyed booster, and I don’t want to turn anyone off Wild Beasts. So I’ll go the subtler route and just say that if you’re looking to hear music that evades categorization, you must find Limbo, Panto.

Fleming answered some questions by email as the band finished work on their second LP and prepared for their first stateside visit.

SPLICE TODAY: How much led up to Limbo, Panto? As in, when did you guys start playing in this lineup, have you done any demos or EPs before this record, or what?

TOM FLEMING: This lineup has been together for about four years. We had recorded three sort of demo EPs (one of which predates my time in the band), and we were asked by Bad Sneakers Records if we wanted to put something out, a single. None of us had really considered singles, preferring to think of ourselves as “serious album” types, if you know what I mean. However, we considered The Smiths, the Detroit labels etc., and decided it was probably okay. Domino [Records] picked up on this single and asked us if we wanted to make an album, though we released a second single on Bad Sneakers as a parting gift (Ed and Ash from the label now manage us). We also released a 7" on Domino (“Assembly”/”Sylvia, a melodrama”) before the album. Essentially, Limbo, Panto is a greatest hits compilation of our early years—“The Old Dog” was about three years old, “His Grinning Skull” about three months.

ST: You can spend a lot of time playing guess-the-influence with this record; I hear a lot of Kate Bush in Hayden's vocals (although that may just be me stereotyping an English group), but there's a bit of Talking Heads or Orange Juice funk, some nearly gothic, theatrical moments, maybe a little Jeff Buckley. What bands were you thinking of while writing and recording this record?

TF: We wanted to make a “proper” record of sorts—that is, one with a flow, with obvious singles. The album as a whole thing is under threat, [it] might even be becoming extinct and we wanted to mark it before it was too late. I think the Kate Bush thing is fair, the Orange Juice thing was mentioned to us at the time of our first single and we hadn't even heard of them, though in retrospect there are echoes there that we must have picked up indirectly. Jeff Buckley is interesting; we'd deliberately shied away from that whole singer-songwriter “baring your soul” thing. I suppose at that time I'd say The Smiths, Joanna Newsom, Junior Boys, Bruce Springsteen (no, really), Kate Bush—but each one of us would give different answers to this I'm sure. Part of our intentions in going in with [legendary Swedish producer] Tore Johansson was to make a concise pop record, and we deliberately swallowed some more exotic influences in an attempt to make things coherent and accessible. Personally I dislike referential music unless it makes something of its constituent parts, here's hoping.

ST: Similarly, you seem to draw a lot of inspiration from non-musical arts, particularly poetry and the visual arts. At the very least, there's a lot of vibrant imagery and wordplay in the lyrics, and your videos are quite striking and thoughtfully produced.

TF: Thanks. As far as videos are concerned, we'll sort of have a vague idea of what we want in terms of approach and tone, and then we'll let directors come to us, and we've been very lucky. It's fair to say that Hayden is more into the visual arts and indeed the visual presentation of the band, and is good at translating his ideas to designers and directors. I'm sure we'll all take what you say about the lyrics as a huge compliment, though I would stress the importance of musical imagination measuring up to lyrical imagination—that singer-songwriter hostility again. Though in the past we have quoted our favorite writers on single sleeves—Angela Carter, Helene Cixous, John Updike—before copyright became too complicated.

ST: How did you come to know Tore Johansson, and what was it like to record an album in Sweden with him? And I'm curious to hear your thoughts on Sweden generally.

We were introduced to Tore through the Domino Records connection—he produced Franz Ferdinand's debut, which sounded great, and did very well over here. He came over to see us play and talked about his approach and his interests, and we saw eye to eye with him. As regards recording the album, he was at first fairly brutal, but we soon came to realize that we were after the same things from the album. His approach to arrangements is very adventurous, and his mixing is so detailed—there is so much on the album that is barely there, but that really makes the difference texturally. I think he sort of saw how old-fashioned a unit we were regarding how we formed and how we play, and wanted to capture that and give it a shine.
And Sweden was great, though we were down in Skane (far South), which I'm told by locals used to be owned by Denmark, and is not considered by some to be “real” Sweden. Malmo is a music town to the Nth degree; people move from Stockholm to be there. Apparently there's a Malmo sound, which is more of a scuzzy rock and roll sound than the more electronic and pop stuff done further north. We had a smoked eel Christmas dinner (washed down with akavit—serious drink) and spent plenty of time getting lost in foreign climes.

ST: Can you talk a little about your band experience in England? From the year I lived over there, the whole industry seemed fairly close-knit, but also kind of lorded-over by a few radio stations and NME. So how did you build a fan base and catch Domino's attention, for instance?

TF: Certainly the commercial end of British music is pretty powerful and naked in how it operates, and it can still send the most appalling shit to the top of the album charts. And it is true that 95 percent of the industry is based in London, and though it is a city of millions of people, it is amazing how much everyone knows about each other. The thing is though, Britain has so much going on that is off-radar, so much diversity of stuff—in Leeds for example, where we live, though it is a small city, there is an excellent noise and improv scene, dub soundsystems and pirate radio stations, huge bassline house stuff, hip-hop, garage-punk rock bands, psych folk and out-there singer-songwriters. We also have magazines like Wire and Plan B, and endless, endless blogs to cherrypick from.

As far as building a fan base goes, we played in our own little nest in Leeds a lot, then made a load of trips to London (it's still necessary, to a point) and just kept continually making our point. We did have a bit of exotica when we came over, like fey arty types that spoke in flat Northern vowels; I suppose you could call it image making?

ST: You've already started sessions for your second LP, and I'm curious how the songwriting and arranging processes have evolved in your band. When, in a song like "Cheerio Chaps, Cheerio Goodbye" the arrangement kind of swings back and forth between a few ideas, is that the result of a lot of group thinking, or are you basically following the lead of the songwriter?

TF: The album sessions are over as we write. I think the main differences between this album and the first is that this one was written a lot more quickly, and as a result a lot more detritus was used, a lot of little themes and ideas that we might have thrown away. Usually there is a germ of idea that begins with either Hayden or me, but there is an increasing amount of cross-pollination, and of beginning with, say, a beat, or a guitar chord change. We left a lot more to chance this time and I think that this collection of songs sound more focused for it. “Cheerio...” was designed to sway with the wind, as a vocal track, whereas all the new ones have a kind of pulse about them. We've kind of stripped back, I suppose. Obviously when you have a group of people working on something control is wrested from you, but the outcome is usually a lot, lot better for it, and it can be taken in ways you hadn't imagined.