The former Apparitions frontman has a new record out under his solo moniker. 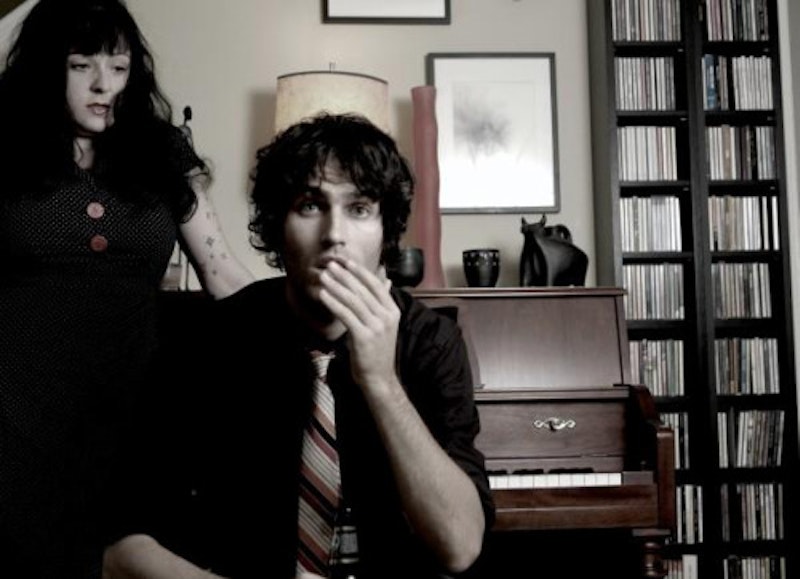 Mark Charles Heidinger (a.k.a. Vandaveer) has been making the rounds for a while. Originally fronting The Apparitions with Robby Cosenza and Justin Craig, Heidinger now focuses entirely on his solo work. Vandaveer is a loose vehicle for Heidinger's 70s-style acoustic story songs—think Cat Stevens, Gordon Lightfoot, John Philips, etc. Vandaveer contributed a song to Splice's own original compilation, The Old Lonesome Sound. His second album, Divide and Conquer, was released last month. I caught up with Heidinger before his month-long tour through Europe, beginning the end of September.

MARK CHARLES HEIDINGER: I've been making noise with Robby & Justin for some time now, first with The Apparitions, then with These United States, but at the moment I'm fully entrenched in Vandaveer. I wish I could manage being in multiple places at once, because there are a lot of projects I'd like to pursue, but time is a beastly thing to wrangle, and you have to whittle yourself down to the core sometimes.

ST: Were you involved in any way with the latest These United States album, Everything Touches Everything?

MCH: I was not involved in the making of said record, but I do enjoy it turned up way-too-loud-like when we're on tour.

ST: What was the recording process like for this latest album? Did you go into it wanting something different than the first album? Did the first one feel like more of a just a one-off side-project?

MCH: The first record [Grace & Speed] was very much an exercise—a reaction, more or less, to the way The Apparitions made records. We had a tendency to plod along square—wheeled and deliberate, and after a while that process wore me down. The idea with G&S was to just quickly churn out a handful of songs in a more stripped down environment over the course of a few days. When we finished I felt like I had something worth pursuing on my hands, and so gave the project a name and ran with it. With Divide & Conquer I wanted to work in a different manner altogether. I put together a home studio and tracked more than half the record myself, allotting as much time as necessary to get what I thought were natural, comfortable takes. When I reached appropriate stopping points on this set of tunes I headed back to Lexington to work with Duane Lundy, whom I've worked with on every record I've been a part of. Duane helped us reach the finish line in what turned out to be the most pleasant recording experience I've had to date.

ST: You're about to set off on a pretty lengthy European tour. Is it just going to be you or are you bringing a backing band with you?

MCH: We've been hopping the pond back and forth for a few years now, and, for most of those trips my lovely singing partner Rose has joined me. She's responsible for all those lovely harmonies on the new record. Rose goes everywhere I go these days. What started out as a solo project now very much feels like a duo/duet-based beast now. Singing these songs by myself just wouldn't feel right.

ST: You did a Blogotheque take-away show about this time last year? How'd that come about?

MCH: The Blogotheque folks are dapper and dandy and just about the most enthusiastic music lovers I've come across. Not sure how we really connected with them initially, but we've shot a bunch of footage with them, some posted, some not yet posted, and every time it's a blast. It usually involves copious amounts of wine, wee hours, subway trains, shouting, foot stomping, and more shouting. I'm hoping to reconnect with them again in a few weeks.

ST: You've been on the road a lot over the past few years. Who are some of the best bands you've gotten to play with?

MCH: One of my recent favorites would include Jonathan Vassar & The Speckled Bird from Richmond. Beyond being incredibly talented, they are phenomenal people. Good spirited folk, through and through. The Missionaries and Red Clay River—both from Roanoke, VA—were amazing, as well. By the sound of things it would appear we only tour our nation's tenth state, but that is not actually the case. We've been quite lucky and fortunate to share stages with so many fine folks.

ST: What are you listening to now? What's been on heavy iPod rotation so far for 2009?

MCH: Rose and I have taken to the idea of only listening to music we acquire on the road, either by purchase or CD swap or the generosity of friends & fans passing along a mix CD. Current favorites would include Teatro by Willie Nelson, the new TUS record, anything by Patton Oswalt, and Writer's Block by Peter, Bjorn & John. Then the usual suspects come into play—Dylan, Tom Waits, etc. Rose has a Lionel Richie "Best Of" record that's so bad it's great. Fun times, dancing on the ceiling and all that...

ST: What are your plans after you get back from tour late next month?

MCH: We'll have 10 whole glorious days off when we get back from Europe, then we shove off for the western and midwestern part of this vast and neverending country of ours. We have a bunch of dates lined up that will keep us busier than can be through Thanksgiving. After that we're going to our respective corners for sleep, sleep, and more sleep. Oh, and Christmas with our nieces. We love our nieces to pieces.