Guitarist for now-defunct Page France has a new album in the works, and the band hasn’t even played together yet. 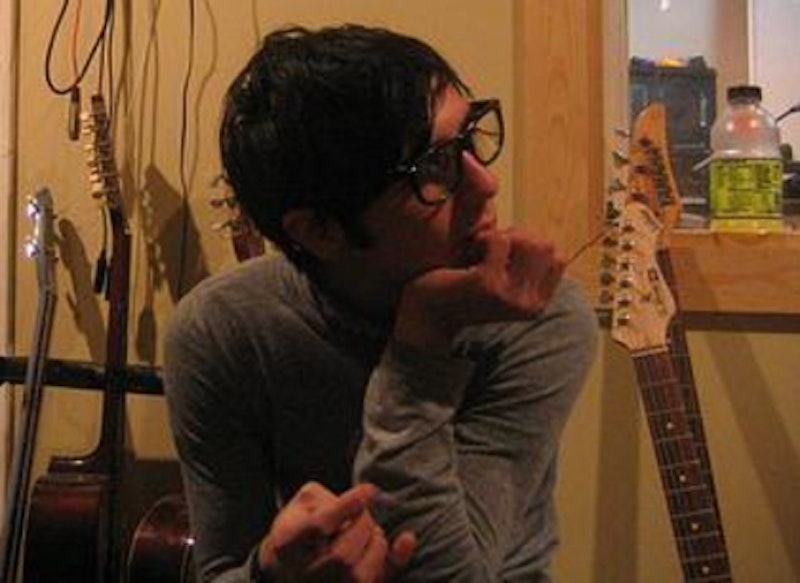 Splice recently sat down for a conversation with Jasen Reeder, former bassist for indie-folk band Page France, before they broke up last summer and frontman Mike Nau started work on his side-project, The Cotton Jones Basket Ride. Reeder is the kind of music aficionado that could name all the bad 1980s Dylan albums in order of release; or whose iPod is just as likely to shuffle to “Mama” Cass Elliot’s “Dream a Little Dream of Me” as it is to “Graveyard Slut” by Norwegian death metal band Darkthrone. And it all gets worked into his music. Over the last eight months or so, Reeder and Brennan Conklin-Rosati have been recording instrumental songs in Reeder’s basement studio and sending them to their friend Emily Jane Powers in Chicago. Powers writes lyrics and records the vocals, then sends them back to Reeder for final mixing. Along the way, the songs pick up instruments: violin here, drums there. Their band, Introductions, follows in the same kind of lo-fi dream-pop as Beach House, Galaxie 500, and Parker and Lily. I asked Reeder about recording and touring with Page France, and then we were joined by Conklin-Rosati for some talk about Introductions and the process of recording long-distance.

SPLICE TODAY: When did you join Page France? And how did that come about?

JASEN REEDER: I joined Page France in the early part of 2005. I knew Clint, the drummer at the time, through playing in other bands in the Hagerstown area and Clint was playing in Page France and I ran into Mike and Brian from Page France at one of Clint’s other band’s shows in Smithsburg, of all places. We talked, tossed a football around, and by the end of the night we were making plans to jam.

ST: What songs did Mike send you originally?

JR: Oh man, the first songs that Mike sent me were never released. They’ve never been finished as Page France songs; they were all solo demos as far as I can remember. The only song of those that’s ever seen the light of day was “Antarctica,” but on that CD, it was just a piano ballad and it was about four and a half minutes long. Nothing like the album version.

ST: It was shortly after Page France’s second album, Hello, Dear Wind, came out that the band started to get some good press. Was there some point it was obvious the band had made it?

JR: I don’t think so. It’s a strange situation, you know, being in a band when you’re on tour all the time. Your life is spent in a van, and you’re sleeping in a different hotel every night, so it’s really hard to get any perspective on making it or not making it. It was nice though, after a while of doing it, to be able to afford cigarettes whenever we ran out and to not have to rely on candy bars from gas stations as our only food. I guess that was a good sign.
ST: Do you have a favorite town/city to play? Favorite venue?

JR: Michigan was always really good to us. Every time we played in Michigan we always had a lot of fun. As far as venues go, there’s a place in Chicago called Schubas that really stands out because they had a restaurant attached and the food was amazing and always free for the bands. That’s how I've learned to judge venues, by how good the food is.

ST: Favorite band you ever played a show with or toured with?

JR: Definitely Canada, man, they’re an amazing band and good friends of mine. Starflyer 59. Playing with them was fantastic—despite only playing three shows with them. These United States were fun, too. We toured with Canada, Anathallo, Bishop Allen, the Teeth, and Headlights. I think that was it as far as like, bands we actually toured with—you know, more than just a show or two. And all those bands were really awesome to be on the road with and to get to know.

ST: Tell me about some shows that really stand out to you.

JR: My personal favorite was probably a show in Canada. This was when we first got a tour rider, you know, where you can request stuff to be at the venue when you get there, and so we were just putting stupid shit on there like: “bottle of Jim Beam,” “a lot of diet Pepsi,” whatever, you know, just to see if it would actually be there. So when we got to the venue, we went to our green room, and there on the table was a bottle of Jim Beam with a label-maker label on it that said “Page France.” That was pretty fantastic.

ST: Page France broke up pretty abruptly after their third album, And the Family Telephone, the first LP released after signing to Suicide Squeeze. Can you give us some of the backstory on that?

JR: Well, it just kind of happened. We had just gotten back from our last tour with Bishop Allen and The Teeth. And we had had a lot of problems: our van broke down, we got stranded in Arizona in the middle of summer and it was horrible, and Mike had started working on what became the Cotton Jones record, and I was interested in finishing up college. So it really seemed like things had run their course and that it was the right time to go off and do our own things.

JR: No. I’m not involved with Basket Ride, except for being a big fan. Mike’s a fantastic songwriter. And actually, he did record drums on one Introductions song. He was kind enough to do it, and who knows. I'd love to have him play on another.

ST: How’s the Introductions album coming along? Do you have a name yet?

JR: We don’t have a name yet. But the songs are still very much in their infancy. I think there are only a few songs that are close to being finished. We have around 10-12 songs that we’re working on right now. I’d like to have probably 10 songs on the album. I think we’ll probably try to finish it up by mid-summer, July or August. Brennan and I are going out to Chicago in April, and then Emily is probably coming to Maryland in two or three months, so that’ll help it all along.

ST: How did you and Emily Jane Powers meet?

JR: I first heard about her probably three or four years ago when I came across some of her songs online, some of her solo stuff, and I really liked them. And then when I was touring with Page France, whenever we were in Chicago, she’d come out to the shows and we’d talk. And at some point I talked her into working on music together, and here we are with these songs.

ST: How did you decide to start recording music? And what’s the process there? How do the songs come about?

JR: Well, it’s pretty much just me and Emily and Brennan and then, you know, whoever else is around. For the most part, Brennan and I record all the instrumental stuff, and then we pass them on to Emily and she writes the lyrics and records the vocals and sends them back. They’re really not songs until she’s done her thing.

BRENDAN CONKLIN-ROSATI: I’m relearning to play the guitar. And I’m playing a lot of tambourine now, too. It’s hard work.

ST: What makes it such a good musical partnership?

JR: I don’t know this for sure, but I think when I was first sending her some of my songs, that I had recorded on four-track or tape and were really bad quality, she probably wasn’t all that happy with it. So it took a while. But somehow, I don’t know how, but we’ve managed to really pull something together. We just start recording and the songs just sort of write themselves.

BCR: It’s a Sunday thing. Or maybe a cold weather thing. We don’t know which yet.

ST: Do you know other musicians who are making music this way? You’ll have a whole album or almost a whole album recorded before you’ve ever actually played together, right?

JR: Yeah. That’s pretty much right. I don’t really know any other bands that are making music like this.

BCR: The Postal Service. And then they named their damn band after it.

JR: [Laughs] That’s true. I know a lot of musicians who are doing this on a smaller scale. Someone tracks a part for a song if they can’t make it into the studio and it ends up on the band’s album. But it’s just the whole digital era of music. It’s so easy to do that now. I hope other musicians out there are doing it too. I’m sure they are. You know, all you need is a guitar and a MacBook or a MySpace account or something like that. Everyone should do it.

ST: Are you making plans for shows?

JR: Not officially, but we're hoping to do a small show in Emily's apartment next month, to see how it goes.

ST: What have you two been listening to lately?

BCR: I’ve been listening to a lot of Starflyer 59 and Blonde Redhead.

ST: What was the first CD you ever bought?

JR: No Doubt’s Tragic Kingdom was mine I think.

BCR: Probably Nirvana or some shit.

JR: I had that on cassette, so it doesn’t count for me.