One of the hardest working bands around takes a moment to talk Philly, progressive revivialism and sleeping habits. 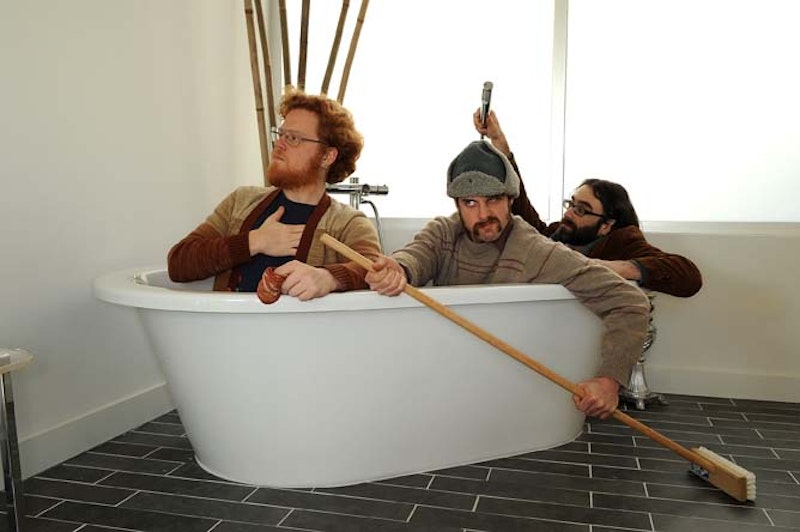 It’s funny when friends in different states all recommend the same band at the same time. One gal was in Michigan, one was in California by way of Alaska, and the band, they told me, was from Philadelphia. Feeding my recent hunger for a kind of gospel-bluegrass mash-up, Hoots and Hellmouth became that kind of one-band sweet spot that seemed to satisfy various aural cravings simultaneously. Mountain folk wanderings with sweet old-time harmonies? Check. Fire-and-brimstone with a healthy dose of all-together-now handclaps? Indeed. More unexpectedly, there’s a surprising mellowness to their more introspective cuts that reveals versatility not often found in current alt-folk scene, bringing to mind vintage Jackson Browne or John Prine with a little extra twang mixed in.


"This Hand Is A Mighty Hand"

Like their sepia-toned photograph featuring a hall full of cowboys, hobos, workmen and their lace-dressed wives and women, their self-titled 2007 record Hoots And Hellmouth first grabbed me as a roots record that was both effortlessly timeless and warmly and strikingly communal. Helmed only by the core triumvirate of Rob Berliner, Andrew Gray and Sean Hoots, both their studio and live outputs do a good job of recreating a merry, shouting, stomping gang of barroom sinners experiencing a hysterically jubilant moment of salvation through the healing power of song (before slipping back again). Their newest release, The Holy Open Secret, goes one step farther, keeping true with their signature dancing-on-the-grave gospel base and smoothing out some edges along the way, maturing into a powerful and accessible alt-bluegrass offering that almost any acoustic appreciator could enjoy.

On a near-constant tour with bands that range from Dr. Dog to O’Death to Langhorne Slim, these guys may just be the hardest working band around.

Thanks to fellow Philly folkie and friend of the band Birdie Busch (featured on Splice a few months back), I was able to catch up Hoots member Rob Berliner to chat about the band.

SPLICE TODAY: Seemed like a long, hard winter on the east coast. Does traveling up and down New England get a little dangerous at times?

ROB BERLINER: New England is nothin' ... after many trips through the desert, the Rockies, Wyoming and the streets of San Francisco, New England's a cinch on the van ... it's actually super refreshing to be on tour in New England because you move through states in a matter of hours ... makes for a sense of accomplishment at the end of the day. I mean ... it takes a day to get from one state line to the next out west. Who's got time for that?

ST: There’s a really communal, everyone-shout-together vibe to a lot of your tunes like “You And All Of Us” and “This Hand Is A Mighty Hand.” Do you write the big barnburners to have audience/whole-band participation or does it kind of evolve into that when you play live?

RB: All our songs just start as simple songs on the acoustic guitar. Sometimes you hear the germ of a song and know that one's a burner from the get go. But sometimes you are surprised to discover that that little song that started all quiet now has a rousing shout chorus in it.

ST: Who sucks at singing the most in the band? How long does it take to figure out your intricate harmony structures?

RB: A lot of our harmonies are just a product of us knowing our way around each other's voices ... mostly, it works best when we just open up our mouths and start harmonizing. There are some harmonies that we've never talked about. We just sang 'em and there they are. Of course, there's a whole other set of harmonies that we spent hours, months or we still don't have perfected after years, but that doesn't make for good a good story like the former.

ST: You guys really finish each other’s sonic sentences to a great degree, which is great to watch. That closeness ever get too much? Ever have an argument mid-show?

RB: Very rarely, but, yes I do recall a moment in Louisville when we had an argument, started a song and then had a round of apologizing when the tune ended.

ST: Your bio says you guys are “blazing the trail of progressive revival.” The term progressive can get kind of hairy, no? Who came up with that?

RB: Sean came up with that. "Progressive" CAN get hairy, so can "alternative," "Americana" and "post-anything".

ST: How does Philly inform your writing?

RB: It's our home. The other two guys do all the writing, but I think that since home is where the heart is ... I know that both of them are constantly jotting stuff down in their little notebooks while in the van, at bars or anywhere. So ideas come from all over.

ST: Anyone you really wish would call you up and take you on tour with them?

RB: I would most enjoy touring with Dr. Dog again. Both our bands originated in West Chester, PA, moved to Philly (West Philly, mostly). Those guys are old friends, neighbors and the best damn band in the world. Beyond that, we enjoy touring with just about anyone because it's nice to have other people around on a nightly basis than your bandmates.

ST: Most mind-blowing record you listened to lately?

ST: Do you think the way a band looks really does matter? You coordinate outfits for shows?

HOOTS: I do; however, we've rarely coordinated outfits. What you see us wear on stage is more than likely what we wore in the van that day.

RB: Favorite place to play?  I've been having a hard time with that question lately because there are so many places out there... lately it's been Iota in Arlington, VA. Worst venue ever ... I won't name names but I will say that finding out that the "venue" is actually a "restaurant" isn't all that bad. It's finding out that it's a "restaurant that thinks it's a venue" that's really aggravating.

ST: I see you’re playing my hometown of Evanston in April. How’s your response been in Chicago?

RB: Generally very good. It's a slow process building up a crowd in the bigger cities because there're so many demands on people's time. For example, we played Shuba's one night last fall and a) it was Sunday, b) it was the first Bears game of the season, c) it was the MTV music awards (or something like that) and d) it was raining. Needless to say, it was a quiet night.

ST: Did your religious upbringing have any impact on your songwriting? There’s clearly a deep appreciation for spirituals and get-up-and-move gospel that winds its way through your records, often bringing the holy ghost into seedier corners, like in “Known For Possession” which might be my favorite tune of yours.

RB: Sean was raised down there in the South. That kind of stuff was integral to his upbringing and it definitely shows. The rest of us found the spirit through good old rock and roll. It's amazing that gospel formed the roots of rock and roll and it's still informing it now 60 some years after the fact.

ST: Though they sound great, I go back and forth about some of your mellower, well, “poppier” tracks like “Forks and Knives” off your first record and “Three Penny Charm” and “Ne’er Do Well” off your recent release. Does your vision for the band sound change or take unexpected turns when you got in the studio?

RB: Our live show is supported at this point by the rougher and rowdier tunes that really get both us and the crowd pumped up … it helps to get noticed when you're makin' a lot of noise. But we've made no bones about the fact that we're just as interested in all things quiet, introspective and working outside of the idiom of "old timey Americana". It's the quiet flip side to our rowdy coin.

ST: What’s the weirdest thing people should or shouldn’t know about Hoots?