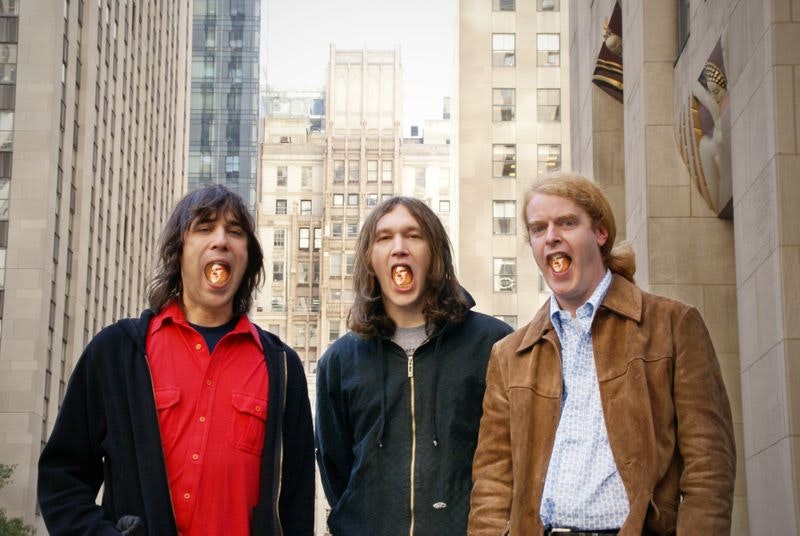 I had been playing drums with the Baltimore band Errant Strike for a few months when Tim Kearley, that group’s mastermind, first introduced me to Home. Tim’s old friends from his Tampa/St. Petersburg hometown have been releasing music as part of the Screw Music Forever collective for years, and I was familiar with the roster’s unusually creative and catchy output, but Home was impressive even by those standards. By this point the group had recorded 16 albums, all titled with the according Roman numeral, and every single one was great. Sort of a mix between Pavement, Pink Floyd and Sunflower-era Beach Boys, Home’s music is funny but not cloying, weird but still accessible, and catchy—exactly the kind of band that you listen to and wonder: How have I never even heard of these guys before?

But it gets more bizarre. Originally the basement recording project of songwriters Andrew Deutsch and Eric Morrison, the group was signed to Interscope Records in 1994, on the strength of eight extremely lo-fi, cassette-only records that they self-released. They toured with the Flaming Lips, Grandaddy and Super Furry Animals, and worked with Mercury Rev super-producer Dave Fridmann on their 1999 record XIV. Some Behind the Music trappings came about: after getting dropped by Interscope, the group bounced around different labels. But they kept recording; their last album, Sexteen (“a concept album about fucking”) came out in 2006, and it’s just as bizarre and seemingly made-for-fame as their earlier stuff. Again: How can this band be so little-known?

Finally, a little validation has come Home’s way. Jagjaguwar subsidiary Brah Records has made the irreproachable decision to release not only the new Home record, XVII, on vinyl and digital download, but also a “digital box set” of the band’s cassette recordings, I-VIII, for only $15.99. This is the best pot-addled-lo-fi-psychedelia bang for your buck that you’ll ever get. I emailed Eric to ask what it’s like to be in a band for almost 20 years, and discovered that it’s not always so bad to be mistreated by your major label.

Splice Today: Did Home relate to or grow out of an existing “Tampa Scene”? I just assume every band in Florida wants to sound like Tom Petty.

Eric Morrison: Not surprisingly, I was very ignorant of the Tampa Bay scene when I arrived. I posted a flyer in the local record store looking for musicians that "got" Bo Diddley and Velvet Underground. Oh yes, there were the perforated phone numbers at the bottom of the flyer that you could rip off. Yes. I wound up in a band called Chocolate USA, which was nice enough, but not nice enough to keep me from writing to Andrew, who was in Ft. Lauderdale at the time, [to say] that he should move up, because we could totally dominate the area, from what I could tell. It was a rare moment of brash bravado for me, but I'm glad for it now. It wasn't until later that I realized that I was broadcasting from the epicenter of Death Metal.

By the time Home got going, a good group of bands in the area were going, too. Dumbwaiters, Ima, Meringue, Clang, Scrog, etc. It was a good but unlikely mixture of bands at all the shows and in the various recording places.

ST: How about the influences (musical, personal, chemical) on the tape recordings? Did you ever want to beat up the guys in Ween?

EM: I did. They always seemed too jokey, and they made me hate the jokey side of me. The influences that I felt proud of seemed to handle the "grain of salt" much better. Bo Diddley, Sonic Youth, Television, Screaming Blue Meanies, Bowie, Husker Du, Moe Tucker … they could all tell a light tale without tipping their hand.

ST: How’d the concept grow beyond the two of you? Did it take an effort to recruit the rest of the band?

EM: We poached Brad [Truax, bassist] from the aforementioned Chocolate USA, and found Sean [Martin, drummer] because I tried to date his sister. Those two events happened very close to each other. As far as I remember we met up in Sean's broken home (recently vacated by his parents) and played a few rudimentary songs that wound up on the box set. It was a beautiful and whole experience that made me think that "Home" was a good enough name for a band.

ST: Who’d you get to tour with, in Florida and elsewhere?

EM: Oh shit, we've been blessed weirdly with some great bands on tour. Grandaddy, Flaming Lips, Super Furry Animals, Dumbwaiters, Meringue and on and on. Among them, a great forgotten band called August Sons. They were deepwater Mississippi boys who built their own modulation pedals. They sang a song about fireflies so catchy that I will probably be humming on my deathbed.

ST: I'm not trying to turn you guys into the Wilco movie or anything, but tell me about the Sony/Relativity deal. It would appear there's an interesting story here, a kind of picture of how the music industry was functioning at the time.

EM: Oh it was just a fun fluke. Jamie Attenberg was living in Tampa during the heyday of Tampa Bay music. She frequented Blue Chair Music, the record store where we sold our first eight tapes. She sent a copy of Home V to her brother, who happened to be an A&R guy at Sony/Relativity. For whatever strange reason, he saw something in the cassette and signed us. Legend has it, that as a finder’s fee, she got a Sony Platinum credit card. But that might be just rumors.

As for how the industry was moving, I suspect the big dogs were looking for an R.E.M. or Nirvana, while the people on the ground just wanted another Pavement. Either way, we got a van and a studio (both of which we use to this day) and they let us go scot-free when they decided Hip-Hop was more lucrative.

In short, we won, despite what Albini warned.

ST: What's it like listening to the I-VIII box for you guys now? Painfully awkward pimply photos, or endearingly youthful good times?

EM: Oh, totally the latter by now. Although the pimple shame was probably what took us so long to digitize all this stuff. If anything, it’s the most raw, awkward stuff that stands the test of time. It’s only the embarrassment and pain and the bipolar highs of youth that a person truly owns. The measured stuff only nibbles around the edges of what everyone knows already.

EM: I guess I always liked covers of songs that have been chewed up and left for dead. They’re fun because they are totally familiar, but not so revered that they feel disrespectful to greatness.

ST: How does Home operate nowadays? There are families and spouses and things, plus you're a little more spread out. How often do you tour, or record, or play live? What's the crowd look like when you play now? Old Tampa scene junkies, or young perverts who get off to Sexteen?

EM: I think we probably operate like perfect ex-girlfriends these days, in that they give you all the space you need but then fuck you exactly how you like when they circle back around.

It starts with a few coy phone calls, then plans start to formulate and before anyone knows it consciously we are gathered in a room rediscovering what was natural and beautiful in the first place. Somewhere in the comfortable joy of the connection, an album gets made and a vacation/tour materializes. Then everyone retreats back into their own life plan again for a while until the next round bubbles to the surface.

ST: How about the band's current influences? Anything that you thought was lame during I-VIII that you now really love? Anything you used to love that now seems ridiculous? Has your appreciation for certain groups grown just by virtue of being in the same band for nearly 20 years and appreciating that dynamic over time?

EM: Music is awesome. That’s the most important thing. There are certainly bands and musical memes that turned into dead ends, but they always lead to the next place. Most of our hardcore influences were already notated and ossified from the start. The Bo Diddleys and the VUs and the Bowies and the Devos. Everything our contemporaries did over the past 20 years still seems worthwhile. Even when they existed only to rally against.

ST: So what was the plan with XVII? It doesn't have a theme like the last record. So what were you trying to capture here? What is Home still trying to prove?

1. A concept album about how each home member ruins his life for various reasons  (Andrew discovers his  building gone completely missing suddenly, Eric blows up the sun to win back his wife that discovers him cross dressing, Chris learns his fiancée is a robot, etc.) and is forced to move back into a single house like we were in our youth. We rally forth and produce a pop album that changes the world.

2. It was recorded in standard fashion at the Devil's Island Wet Lab with good-but-predictable results.

3. Home steps back to work on overdubs, while simultaneously working on digitizing the I-VIII albums. We fell back in love with the crappy but spontaneous recording techniques of that era.

4. Individual members reverted back to their comfy four-track-ish simple recording techniques and came up with 100+ songs to dig through.

5. The 15 songs that seemed to work together were picked out and sequenced together.