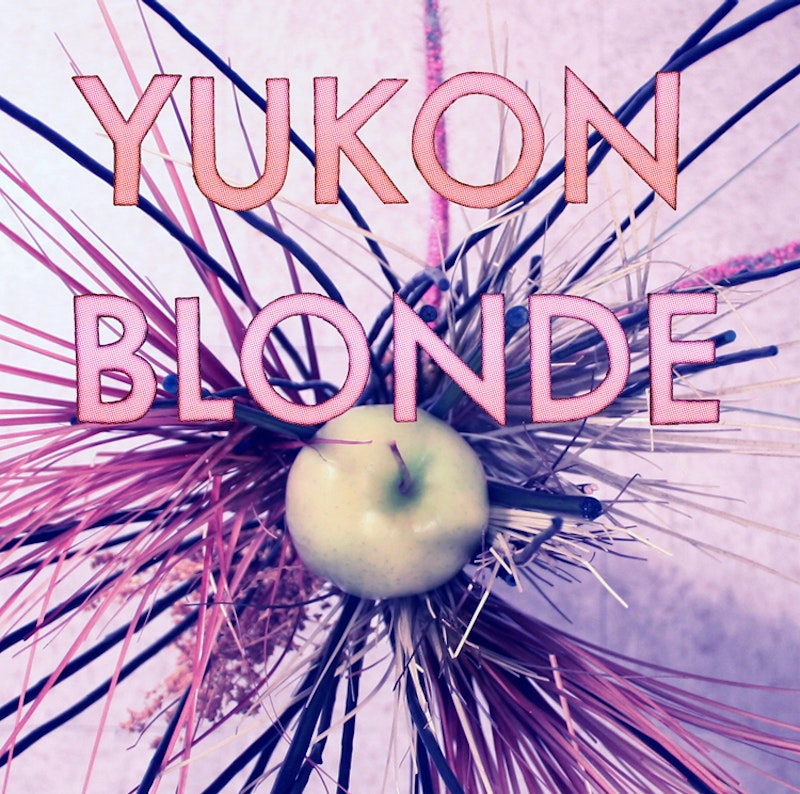 Once again the promos have piled high on my desk here at Splice. I've been lazily staring at them all week. I'm not very good at dealing with new music en masse like this but last night and this morning (since I woke up altogether too early for someone who downed so many beers at Frazier's last night) I loaded up the CD player and went through a good 12 or 15 of these unknown hopefuls. And so, to make myself feel better about the tons of free music I receive but generally never listen to, I offer you some reflection:

The self-titled debut from Vancouver alt-pop band Yukon Blonde is equal parts 70s yacht rock, Van Dyke Parks' Song Cycle, and popular-if-forgettable indie lite a la Belle and Sebastian, I'm From Barcelona, less interesting Jens Lekman stuff, etc etc. If Baltimore were still the snowy hell it was last month I probably wouldn't have any patience for this album, but now that Spring is here and it's 65 and sunny, Yukon Blonde sounds pretty perfect. It's probably because the album just sort of drifts by pleasantly. Not too much stands out, because every song kind of sounds like every other song, which isn't really a complaint because it's all just, well, nice. Kind of like the guys themselves (see tour video below). But they're Canadian, so I'm sure they can't help it.

"Rather Be With You"

Serial Killer is such a dark album title for a band that sounds so cutesy—granted there's no multi-colored toy xylophones from what I heard and they don't do tap-dance percussion like Tilly and the Wall—but Night Driving in Small Towns kind of plays at Rilo Kiley-style lonely angst ("I wake up in a city that doesn't sleep with me / I get up and I walk down crowded streets / I know there is a room in this town for the both us") but never really pulls it off. I'm trying to come up with some other comparisons but all I can think is that Night Driving in Small Towns really just sounds like a vaguely boring version of early Headlights (Kill Them With Kindness-era). Don't get me wrong, they're talented, they're definitely promising, if they played in Baltimore I'd probably go see them (partly because Andrea Rogers is really fucking cute—and not in a weird Matt and Kim way either). And since I've written them off as kind of a Headlights cover band who just happen to not actually cover any Headlights songs, I hope their next album is as good as Some Racing, Some Stopping. Then they too can get signed to Polyvinyl and tour with David Bazan.

Seth Augustus really, really wants to be Tom Waits circa-1985. This is not a bad thing, I guess. Hell, I want to be Tom Waits circa-1985, too. I just don't put out albums. But the problem with wanting to be Tom Waits circa-1985 is that you can never, ever do it better than Tom Waits circa-1985. That Swordfishtrombones, Raindogs, Frank's Wild Years trilogy is no doubt the best thing anyone has ever done, and really, I mean that: Anyone. Ever. When Joe DiMaggio retired from baseball a 3-time MVP winner and 13-time All Star and then started fucking Marilyn Monroe he couldn't possibly know that Tom Waits would come along 30 years later and totally out-cool him in every way possible. So when the first track on To the Pouring Rain starts up and it sounds like "Jockey Full of Bourbon" or something and Augustus is howling all gravel-y and hoarse you can't really figure out why. Tom Waits made it so that no one could ever sing like that again without immediate Tom Waits comparisons (I'm looking at you Man Man) and if your music is just kind of knock-off Rain Dogs stuff too, well ... we've got a problem, now don't we?

"To the Pouring Rain"