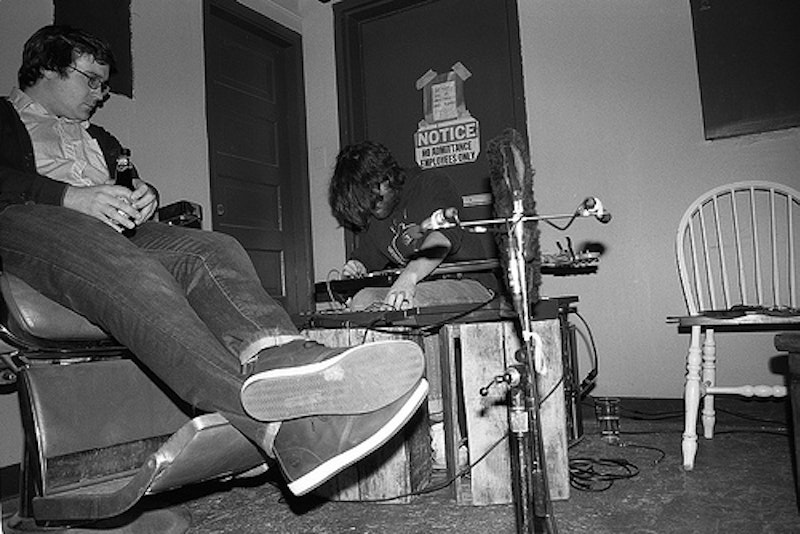 Splice Today: Where did the label name "Bug Incision" originate?

Chris Dadge: Well, the name doesn't actually have any meaning, really. We were—the Bent Spoon Trio of myself, Scott Munro, and David Laing—sitting around a table in the spring of 2005, when the label was hatched, assembling covers. The Bent Spoon Trio, now the Bent Spoon Duo, had recorded a new record, and we'd had one earlier record released the previous year by a local label as an ensemble, which was done in a pro-manufactured edition of 500 CDs. It seemed a little insane to us to continue this pattern of over-the-top, bigger-budget releases for music that was most likely going to be different in a few months, anyway. The label was inspired largely by Quakebasket, Tim Barnes' label; specifically the Futuro record, which was housed in a folded paper sleeve with a page from a French novel wrapped around and drawn upon.

This unique, one-off, modest approach to releases was a gateway. Around this time, I also became aware of Chris Corsano's Hot Cars Warp imprint, and the uTech label—back when they did CD-Rs and more improv-y stuff—the latter of which was a big inspiration for the unified look. Identifiability was always a part of having and starting a label. Emanem was a label I admired deeply, and I thought the standardized look was great, but I also thought their aesthetic could've been a little hipper, though I do love the no-nonsense approach Martin Davidson applies to his business.

Anyway, the name itself was something of an afterthought, something that was added at the last minute in case we ever released more music in this manner. It was another six months before it happened.

ST: My theory was that that name was an outgrowth of the styles of a lot of artists on your label, who often adopt minimalist or fractured approaches to composition.

CD: As for your theory, even though it doesn't relate to the name, I do agree with the general characterization of the music. For the most part, I am looking for people who have developed unique, personal voices on their instrument, and have found ways to integrate those voices into an improvised music context. My very favorite stuff is like Chris Riggs, Mike Khoury, Ben Hall, Jack Wright. These people have not abandoned a sort of old-school pride in being able to be quite well-versed in their instruments. They actually play something, well.

The voice I am looking for occasionally arises out of combinations of people, or an approach—a la Bayal or Super Deluxe Gas Jockey—but my original love for improvising was developed through listening to people like Derek Bailey, Evan Parker, et al, so a contemporary example of that language invention is what really gets me.

ST: I've always had the sense that the Canadian government is more nurturing financially in terms of the arts than the United States is. It would make sense, then, that in Canada there's a larger creative class or pool, people for whom music or performance is a focus, a job, a vocation. Is this the case?

CD: Canada does indeed have granting agencies at the federal and provincial levels, and many municipals as well. Honestly, I am not sure why Canada has all this and that there is relatively little in the States. I think the “creative class” is probably not too much different from anywhere else, but one contributing factor might be the expansiveness of the country and how isolated certain parts are from one another. A lot of the criteria for the grants are aimed at developing Canadian “identity.”

For instance, it's very difficult to tour across the country on a smaller scale, and in the west half of the country there are only five or six cities that have thriving “creative music” communities that could support, say, a touring act. A lot of the grants are aimed at strengthening ties around the country and connecting disparate regions, but sometimes at the cost of allowing them to be feasible projects. It's much more logical, for example, to book a tour of a smaller, more densely populated region (such as the Ontario/Quebec area) and play in each city a handful of times, and drive around to the gigs. But, a touring grant stresses the importance of covering huge amounts of space in small amounts of time, which means tons of flying around, car rentals, etc.

A lot of people do get grants to do all sorts of stuff, but I have never received any grant from any level of government, after numerous applications. I've seen and hosted some stuff that is grant-funded, but not really very good, so I think a large part of it comes down to how well your work fits into what they want to promote, or what boxes they to check off on their this-type-of-person-needs-a-grant list.  To answer your question more directly, I would say that there are no more people in the creative class than other places. With city-to-city/country-to-country comparisons, I always find that in a bigger city, there're just more people overall, so there're more people doing whatever kind of work. Creative scenes might have slightly more visibility and more variety in the audience, but it always seems to lurk underneath, due to the nature of the work. I've never lived in another country, so I don't know about it long-term, but in general, I always am pleasantly surprised by the number of people doing fringe-y/non-money-oriented work wherever I've been. I think in Canada, if anything, we probably have a class of artists that live off of grants, despite the relevance of their work, and whole bunch of people who make money off of writing grants for other artists.

ST: What was the first record you ever bought?

CD: The first record I ever bought was Michael Jackson's “Bad” 45. Actually, my parents bought it for me, as I was quite young, probably somewhere in the four-six-years-old range. Still have it. Don't remember the first thing I bought with my own money, but it was definitely a cassette, possibly 90s Aerosmith or something from that era.

ST: What was the first record you purchased that challenged your beliefs of what music could be, what it could accomplish?

CD: The first record that really shook me up was Lick My Decals Off, Baby by Captain Beefheart—R.I.P. I had read about the album in Modern Drummer magazine. It was my routine to go through my favorite drummers' (Matt Cameron of Soundgarden at the time, mid-90s, I was probably 14 or so) lists of all-time drumming records, which were published along with the interviews. I would check out all the albums on these lists, always taking them out from the library until I developed my buying habit. I needed to know who “Drumbo” was. The public library in Calgary had a copy of Lick... on CD—amazingly rare disc, later stolen from said library by the original guitarist in Bent Spoon Ensemble, unbeknownst to me at the time—and checked it out.

At first I found the music really funny, and I’d play it to my friends in this light, but the more I listened, the more apparent it became that they were not jamming, or fucking around at all. That made it even more inscrutable in some ways. Since then Beefheart has become an all-time favorite, after seriously delving into him at the end of high school. Eventually, the real kicker was how thoroughly CB & MB had reworked the language in which they were operating. Ostensibly bluesy rock music, but so idiosyncratically rendered, and technically amazing.

ST: One of the amazing things about Beefheart was that he really threw the rulebook away, in terms of what a song could be.

CD:  Yep, for sure. And he was drawing from other stuff outside the pop music canon. And even in a verse/chorus/verse/chorus-type outline, the way he filled in the blanks was often completely whacked-out and unlike anything else. Wonderful.