An old country legend gets older. 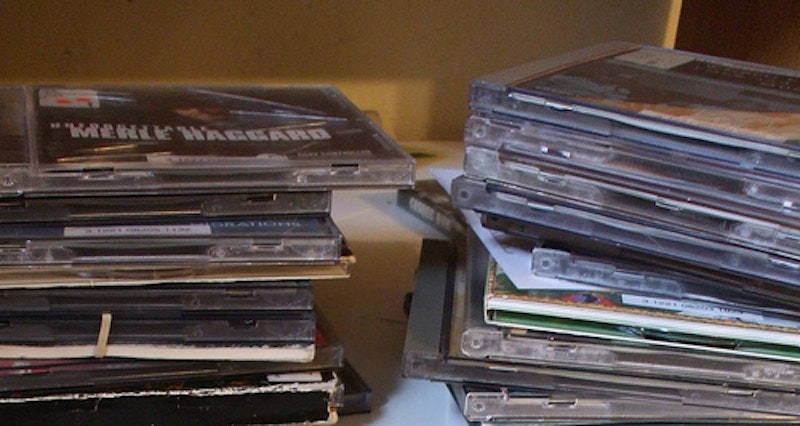 For a genre obsessed with the past, country music is not kind to its old hands. Past values may be praised and former heroes may get name-checked, but when it comes to radio play it’s all about the newest shiny young thing who looks hot in those jeans. Country performers who want a longer shelf life, like Johnny Cash or Emmylou Harris or Dolly Parton, have to reach out to the NPR/folk crowd, wallowing in a different kind of nostalgia and a different brand of authenticity.

In the 1960s Merle Haggard was as big a cultural phenomena as country stars got to be. The most successful proponent of the California Bakersfield sound, with its one part rockabilly, one part swing, he had a massive crossover hit with “Okie from Muskogee.” That song, plunked down in the middle of the culture wars of 1969, took a humorous but resolute stand against hippie revolt, declaring  “I’m proud to be an Okie from Muskogee / A place where even squares can have a ball / We still wave Old Glory down at the courthouse / And white lightnin’s still the biggest thrill of all.”

Haggard had a lot of hits besides “Okie from Muskogee,” and as a singer, guitarist, and songwriter he remains hugely important, a major influence on everyone from George Strait to Alan Jackson. Still, “Okie” was a telling moment. Even though somewhat tongue in cheek (white lightnin’ is every bit as illegal as marijuana, after all) it was still a line in the sand. And though Haggard has recorded with Willie Nelson and was idolized by Gram Parsons, that line hasn’t ever really disappeared. Over the years, he’s added strings at various points, but he’s never put together a New Age album with Daniel Lanois, or written with Jack White, or recorded a cover version of a Trent Reznor song. His latest album title, I Am What I Am, pretty much sums it up. And what Haggard is, is country or bust. He doesn’t have an alternative career path.

It would be satisfying at this point to say that being who he is has worked out for Haggard; that he’s kept recording great albums while those around him have sold out and faded away. It’s not entirely untrue—Haggard’s output over the past 10 years or so hasn’t been terrible. The last of his albums I heard, a bluegrass effort from 2008 with Del McCoury’s band, was okay, and he’s done some interesting roots explorations, honoring his old familiar heroes like Lefty Frizzell, Hank Williams and Frank Sinatra. His 2001 album, If I Could Only Fly, remains one of my favorites—his weary, slightly ragged vocals adding poignancy to a smart set of songs about new love, old loss, and being comfortable with the skin and bones god gave you.

Despite that, listening to I Am What I Am is a disheartening experience. Haggard’s peerless vocal control and phrasing has badly eroded—not surprising for a man in his mid-70s, but not exactly pleasurable to hear either. His songwriting has stalled out too; his Western swing effort, “Live and Love Always,” is fine, but nothing fans haven’t heard 20, or 50 times before. “Mexican Bands” finds him declaring, “I love frijoles, tortillas and tacos,” uncomfortably recalling his similar ill-advised forays into cross-cultural appreciation such as “Irma Jackson.” And, of course, “I’ve Seen It Go Away” and “I Am What I Am” both trade in the kind of nostalgic self-justification that Haggard loved long before he actually became an old fart.

Not that any of this is terrible. And I have faith that Haggard may well have another great album in him. But it’s hard not to feel that he’s not so much taking a contrarian stand as he is just doing time. The audience he understands and speaks to, the one that made “Okie from Muskogee” a massive hit, has moved on, and he can’t figure out how to talk to anyone else. He’s an icon to country fans, alt-country fans, and to hipsters of every stripe, but almost none of them will buy this new album, and not only because it’s not very good. Haggard has been true to himself … but his self was a popular musician with a large audience—and that audience has been less faithful. In part for that reason, I Am What I Am rings uncomfortably hollow.