South African indie rockers come off as succesful almost in spite of themselves with timely new EP. 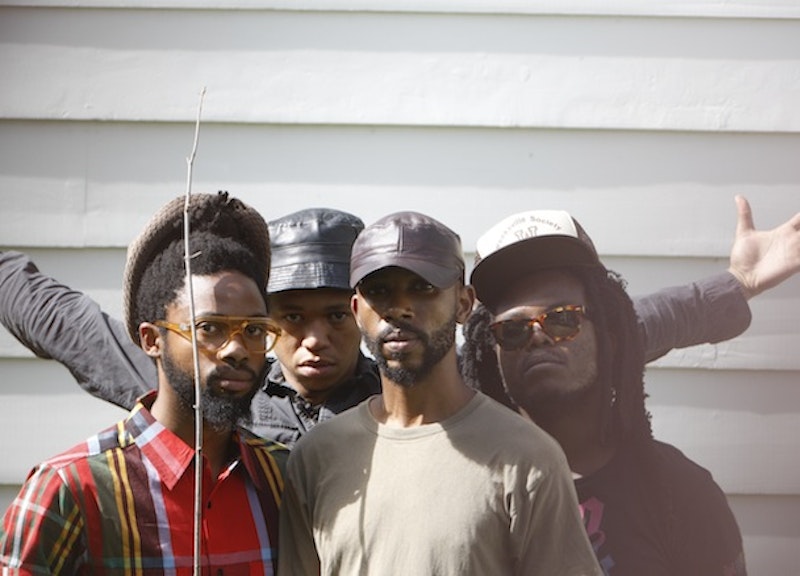 Recently Johannesburg has seemed like the hippest city this side of Berlin, but maybe it’s just World Cup fervor that’s cast a sideways spotlight on the South African Arts. After all, BLK JKS is playing the World Cup despite being thrust from relative obscurity - patronizingly dubbed “the African TV On The Radio,” on the strength of their debut single “Lakeside,” by the cool kids who noticed (five years ago).

To be fair, the band has never exactly lived up to their incredible potential, but with only one LP under their belt in their ten year history, its hard to imagine they have anywhere to go but up, even if it is a slow climb. The scope and ambition of After Robots yielded quite a few highlights amongst the kwaito, reggae, ska & rock, but no cohesiveness. They were a band searching for a sound and while they sounded damn good doing it, it would’ve been hard to imagine them playing alongside Alicia Keys and the Black Eyed Peas at the opening ceremonies in front of tens and tens of thousands of people.

Their new EP, “Zol!” suggests they’re at least earnestly trying to earn their status as the indie rock pride and joy of South Africa, even if they’re overshooting the goal a bit, so to say. The 25 minute EP starts strong, yet somewhat unconvincingly with “Ietys” menacing guitar riffs over clamoring drums coming off like a conscious attempt at sound larger and more aggressive.  They sound big – arena-ready even, with that and the second track, “Bogobe,” a Pink Floyd-esque slow burner. Inoffensive, un-remarkable, but a not too bad lead into the EP’s joyfull heart.

The eponymous “Zol!” is the centerpiece for a reason. A highlife meets soccer anthem, they harmonize “I can roll and shoot at the same time” and leave the more psychedelic touches behind. It’s sunny and light and as infectious as “Lakeside” suggested they could be. Breezy, it's pretty much the perfect embodiment of a summer jam, and an acceptable excuse to put out an EP, even if it makes the other songs sound worse by comparison. Especially, the last two – “Paradise” and “Mzabalazo” are why its great iTunes has a delete, move to trash button.

If they could sustain the sort of casual brilliance they achieve with “Zol!” they’d be more than blog darlings, but as it is I think they’ll take the level of success they afford themselves with these massively catchy singles and work on the rest of their craft while sitting on stacks. Even if they never put it all together, there’s no shame in being a 7” band in the internet era.

You can stream Zol! here.