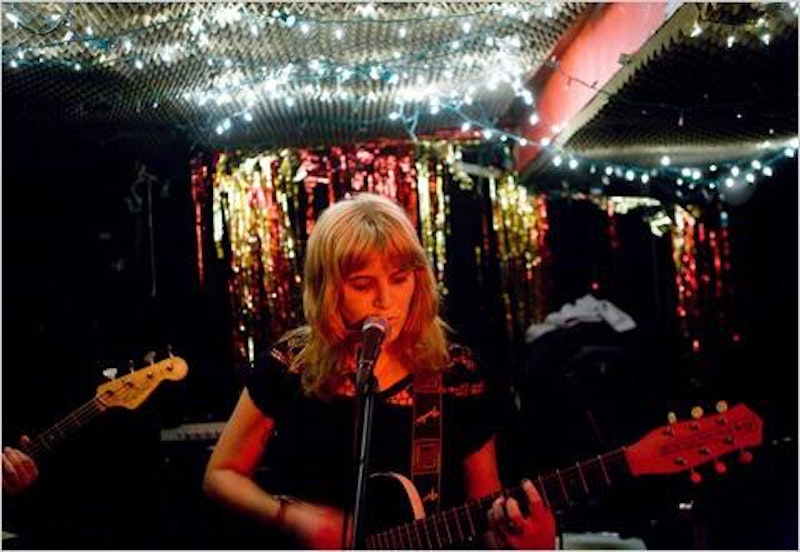 Bah. Best Coast is another example of a band hyped up not for its music but everything that surrounds it. Pay close attention to any of the articles about Best Coast and you’ll hear a lot about California, her boyfriend Nathan Williams (Wavves), weed, her cat Snacks, blog hype, weed, Snacks, and so on. I understand that journalists need angles, but what are they writing about here?

Bethany Cosentino’s music sucks. It’s superficial, shallow, and boring. Crazy For You, the band’s recently released debut LP, is half an hour of simple surf pop pastiche that imitates 1960s girl groups and the Beach Boys aesthetic. Cosentino’s music lacks any original or innovative artistic sensibility, and her band adds nothing that hasn’t been heard or seen before. The album’s lyrics sound like they were written by a fourth grader (“I wish he was my boyfriend/I’d love him to the very end/but instead he’s just a friend/I wish he was my boyfriend”; “When the sun don’t shine, you aren’t mine”; “Honey, you’re so fine/I wanna be with you all of the time”), mostly concerning boys, cats, California, and weed. That’s pretty much Crazy For You. Zzzzzzzzzzz.

Enter Hipster Runoff, one of the funniest blogs about music. I’m not sure why Carles, the site’s main writer, is so divisive but he certainly attracts extreme vitriol and hatred. Hipster Runoff is a biting satire of modern Internet music culture, and Carles writes in character as a sort of hipster analyst or strategist, always suggesting ways to maximize one’s own “personal brand.” He “talks” ‘”like” “this,” using quote marks in abundance and typing in a vaguely cute/childish Internet speak influenced by Facebook and Gmail chat. It’s all a brilliant parody of the iPod generation, and what it means to be “hip” in an era of abundant media. I guess a lot of people don’t get the jokes that spring from Carles’ imagination.

Cosentino’s relationship with Nathan Williams is covered frequently by the site; how Pitchfork gave Wavves’ King of the Beach and Best Coast’s Crazy For You the same score (8.4) to avoid “relationship conflict”; their MP3 love letters; and an “investigative report” about Williams hotboxing Cosentino’s apartment with a “massive amount of weed." Cosentino has fired back, telling Carles to “eat a dick”  and further mocking the site and its readership. What Cosentino doesn’t seem to realize is that her popularity is built on this kind of attention. Bits like this (professionally shot & edited) video featuring Cosentino, Best Coast drummer Alexandria Koehler, and Freddie Gibbs smoking a blunt show how Best Coast and Wavves aren’t lauded for their simple, sometimes catchy music, but rather their personas, their young, “fuzzy buzzy” lifestyles, where the bud is plentiful and the sun is always shining. So far, Cosentino has yet to prove herself or her band as anything more than a gossip magnet, and Hipster Runoff is right to question the hype.