A Quick Lesson in Subgenres 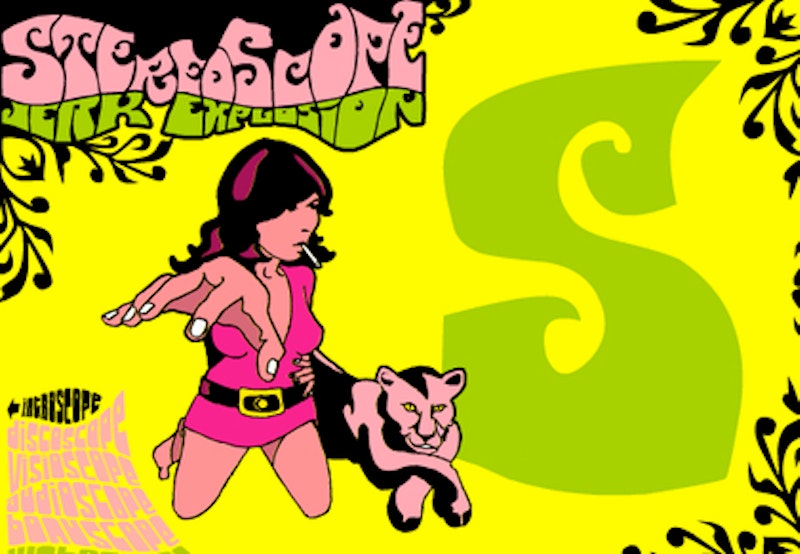 Upon my first visit to Cosmic Groove—a kitschy, velour-laden record store tucked away down a narrow street in Montpellier, France—I was struck by how effectively it covered all possible retro-cool touchstones. There were Asics-like high tops along the windowsill, stacks of Bruce Lee t-shirts in the back, and plenty of James Brown on vinyl. Every bit of music and merchandise had been calculated and well chosen. I was later informed that Cosmic Groove was not just a record store but also an actual label (Les Disques Cosmic Groove) specializing in funk and soul.

Its main attraction is a five-piece psychedelic-funk band, the Stereoscope Jerk Explosion, which, since 2004, has experimented with different styles, from beat-scene jerk music to bossa nova, and even sitar funk. Now, four years and several 7" releases later, this French band is ready to present its full feature length debut. La Panthere Pop packs enough funky rhythms, friendly melodies, and cute stylistic flourishes to please your average Dusty Groove collector. But despite the band’s successful melding of classic and exotic sounds—mixing Hammond organ with sitar—the unvarying tempo and modern sheen is such that the album constantly teeters between bold fusion and informed lounge band work.

The problem with La Panthere Pop is that it attempts to fit a dozen niche markets into one album. First, this is a concept album (supposedly) that is meant to be listened to like a movie soundtrack. I've written about this practice before and how tricky it can be to pull off the desired effect. In this case, the band's cinematic vision results in half a dozen or so "Interludes" and even a "Postlude." It's charming if not a little bit too image-conscious. That can also be said for the miniature comic book that comes with your CD purchase. The band seems primarily inspired by the psychedelic sounds of 1960s rock but also includes brief forays into a handful of other genres. "Sitarmania" opens like a Thievery Corporation Bengali rip before adopting a chorus that recalls The Marvelettes' "I'll Keep Holding On." "Per La Riviera Tolonesa" sways tranquilly on a light bossa groove. And on "Interlude Promenade des British," the band manages to evoke an upbeat luau environment in just 39 seconds.

The most exciting numbers, however, are the more straightforward rock singles. "Fuzz Party" is a searing double punch of Marie Julie Arnal's exuberant Hammond and one persistent fuzz-filled guitar riff. The song feels like an elongated jam session with everyone contributing his or her part. "Bumblebee" opens up with a spicy drum beat, baseball-time organ, and eventually yields to some rapid guitar picking. In the waning moments of the song, light backup murmurs saunter in to add to the ambiance. Throughout the album, vocals are used sparingly, only as a musical accoutrement which never overwhelms the instrumentation.

While there are moments that benefit from the band's ambitious musical scope, on a whole, the adventuring leaves them sounding kind of stale. Instead of really exploring a groove, they dart from one aesthetic to another without ever breaking the surface. Moreover, the modern touch and production of the album has the potential to turn off some listeners. Unlike The El Michaels Affair or The Menahan Street Band who have put out instrumentals that are both raucously funky and clear, La Panthere Pop has too many soft edges. Just like with Black Water Gold, another Dusty Groove collectible by the band African Music Machine, this album feels almost overly organized, not leaving any room for spontaneity.

Perusing around Cosmic Groove led me to think that I was being pegged down. Am I really part of a consumer base that falls for anything with a bass line and a retro touch? If I like soul music am I expected to like Bruce Lee? Likewise, La Panthere Pop is such a grab bag of hip subgenres that the listener might get the feeling that they are being conned into something. The band's experimentation and dabbling in different sounds is undoubtedly genuine, but the result is anonymity. Several critics have said that this album sounds like some unknown rip-roaring club ensemble back in the 60s or 70s. That may be a positive for some bands, but I get the feeling that Stereoscope Jerk Explosion aspire to more than proficient replication. As long as they restrain themselves from trying to pack an entire catalogue into one album, I'm sure that this won't be the last time we hear from the band.