You’re Fired. Do You Love Me?

Up in the Air wants your love and respect (Grade: A-) 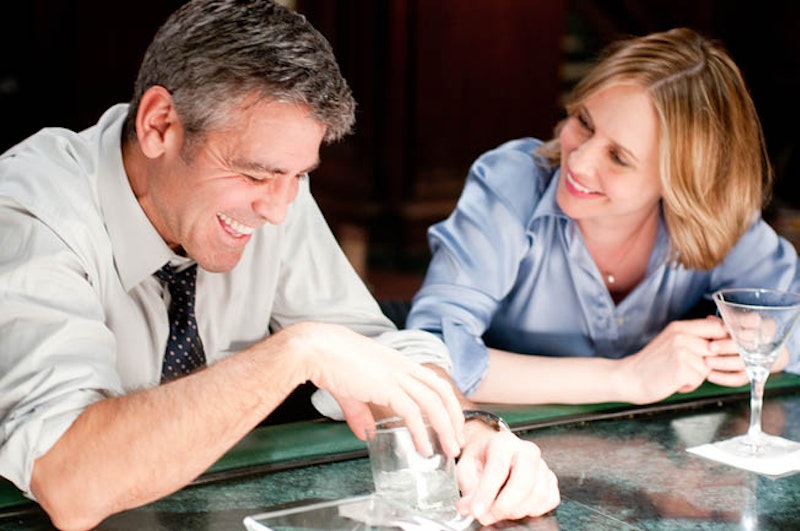 Jason Reitman’s newest release, Up in the Air, will no doubt encourage comparisons to Thank You for Smoking, the successful humanization of a heartless tobacco lobbyist in a humorous and efficient 90 minutes. Both films portray men who do despicable jobs—from the latter’s tobacco lobbyist to former’s professional pink-slip giver—and yet are lovable and charming. Both are loners, having failed in relationships while succeeding in their careers.

But the similarities end there. Sure, Reitman keeps the slick, elegant exterior. Quick, eye-catching segments are interspersed with lush shots of glamorous hotels and airports. This is a bit of a ruse: The trailer for Up in the Air bills the film as a bubbly romp with an affable loner in Ryan Bingham (George Clooney). But at its heart, Up in the Air is torn about its subject, its protagonist, his life and the times we live in. It actually makes for good drama, and it’s markedly Reitman’s most mature Hollywood movie so far.

Bingham’s company fires employees at other companies and helps them (it’s implied) transition to new careers. He fires old men, then tells them to think about new possibilities. It’s not just autoworkers—in a bad economy, everybody’s getting fired. Bingham spends nearly all his time in airports and hotels, crossing the country, firing people. He has virtually no belongings, and no home. Along the way he meets up with a love interest, Alex (Vera Farmiga), who’s also an itinerant, and they coordinate their complicated schedules for sex dates.

Based on the book by Walter Kirn, Up in the Air doesn’t stick to the text, and the differences are important. I don’t usually like to read the book before seeing its film—it raises the bar too high—but perhaps I should start. Reitman apparently added the plot point of Bingham’s company switching from in-person to remote layoffs via video conference: pink-slip iChatting. This adds the thematic tension between personal, real connection versus distance and loneliness. The brainchild of this new program is a young, cold and calculating whippersnapper, Natalie (Anna Kendrick). Whippersnapper Natalie joins Bingham to learn how to fire people and determine if Internet layoffs are a good idea. In the book, she’s unredeemable, but in the film, she’s the moral compass. The changes make this Up decidedly Reitman’s baby.

Up in the Air wants you to think you have it figured out before it ends. Remote layoffs on the web are bad! Clooney’s character learns he needs friends and family! Natalie learns the Internet can’t save the world! Oh yes, and people should never be fired!
Well, it’s not so easy. The film plays with these assumptions and carefully manipulates expectations. Reitman’s smooth direction works well here. It makes you believe everything will be okay, lessons will be learned and the good guys will win. But in the end it questions who is genuine and good versus who is cold and calculating. Clooney’s natural charm acts as an appropriate ruse, emphasizing his character’s good nature and empathy while masking his nonchalance about firing people for a living. Farmiga’s Alex is all wit and braggadocio, leading you to believe she’s just like Ryan Bingham.

I was waiting for Up in the Air to sour on new media technology, preferring “real world” connection as more humane and sincere. “We should fire people in person,” I thought it would say; we shouldn’t break-up with our partners via text. But the film seems not to care either way. The economy is bad. Life is hard and unfair. Both white and blue collar workers aren’t doing very well, and no one is completely fulfilled. Unlike in Thank You For Smoking, Up in the Air is less a hardcore satire of corporate and human insensitivity malice than a soft-core plea for more empathy in all aspects of life. Reitman makes a solid case for restoring connections among strangers, friends and family. Even if it’s a woefully easy case to make, Reitman makes it well, and does so without descending into the overly sentimental, preachy or self-righteous.

You’d be surprised how current all this feels. On the issue of interpersonal connections, not only does some basic Googling show intimate confidantes are on the decline in America, but I think there are now legitimate, non-ideological people claiming perhaps some things should not be done remotely.

I wouldn’t be surprised if Farmiga, who plays Alex with humor and subtle complexity, and Kendrick, who is almost a revelation (and who was wonderful in 2003’s Camp), both got Oscar nominations. With 10 best picture nominations this year, Up in the Air is certainly in the running for a spot. Clooney is Clooney: He is appropriate for the role, and brings the right mixture of charm and remove, but he does not exceed expectations. Reitman’s direction is capable, sharp and observant, but his and Sheldon Turner’s script is better, witty without being forced.

One criticism: a number of viewers will find Up in the Air thin and unresolved. Some may question its relatively breezy portrayal of serious issues, almost glamorizing white-collar distance from economic turmoil. But after letting it marinate, I've decided it meets its own aspirations.