Who Will Be Bitch of the Week? 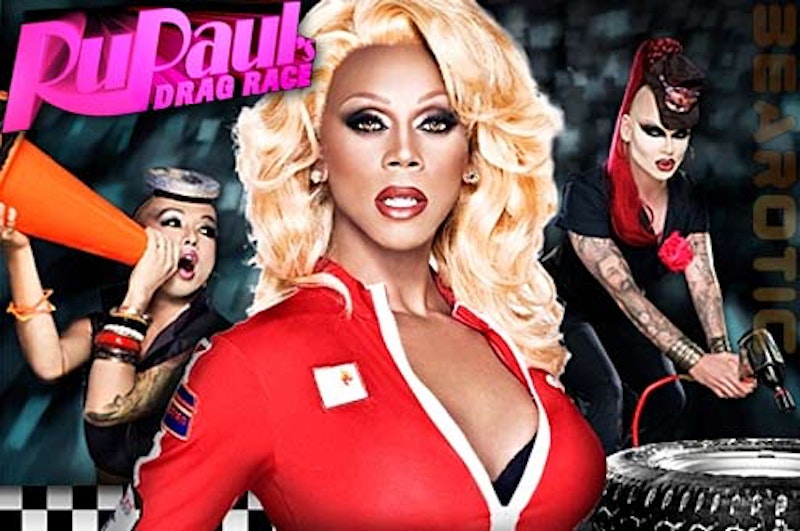 Do you love reality television that has a cast of catty bitches, incessant drama, weaves, weaves, and more weaves, and punchy one-liners? Then RuPaul’s Drag Race is your show. If you ask me, the real winner all along has been JuJubee, that fabulous gaysian pop tart from Boston.

Drag Race is the gloriously outrageous reality television show that’s on the hunt for the hottest drag queen in America. The illustrious panel of judges includes RuPaul, her sky-high weaves, along with Santino Rice (from Project Runway!) and a rotating roster of other fabulous people, including Dita Von Teese. It’s basically a dragged up cocktail of Project Runway mixed with a little America’s Next Top Model for good measure. Hey, everybody always says that Tyra Banks looks like a drag queen, anyway.
But you can forget Project Runway and Top Model. Those shows almost take themselves too seriously. Drag Race seems more like a mockery of every fashion reality show. And that’s what makes Drag Race great television: you always want to see what ridiculous thing will happen next. What funny line will RuPaul say this time? Who will be the Bitch of the Week? Who will look a hot mess during the sing off? The two weakest queens do a Lip-synch For Their Lives, where they battle it out over song and dance to stay in the show competition. It just doesn’t get more camp than that.

Every episode the queens have a small challenge and a catwalk. One of my favorite challenges was when Ru had the queens “read” one another. For those of you out there who are unfamiliar with black gay male culture, let me break it down. To “read” somebody is to diss/embarrass them in front of other people. You say something about them that everybody probably already thinks, but that nobody with any couth would say to their face. And if you’re really feeling it, you might punctuate what you say with a SNAP! According to the Urban Dictionary, reading means “to tell somebody about themselves.” As in, “don’t make me read your sorry ass!” SNAP!

Now let me “read” Tyra Sanchez’s tail. Tyra’s incredibly archival look gives Beyoncé, Diana, RuPaul and Tyra realness all at the same time—you know, basically every black diva who has ever put on sequins and walked this earth—deserves to win based on looks alone. Her presentation on the catwalk is totally on point. When you are a fashion model, or a drag queen posing as one, you have to light the catwalk on fire. And Tyra burns it down every week—I’ll give her that much. Her looks are always edgy and refreshing, the weaves interesting, and the garments outrageous. But there’s just one little thing: the bitch don’t have no personality! In a way, she’s kind of really like Beyoncé in real life, whose “Sasha Fierce” stage presence outpaces the real Bey any day. Have you ever heard Beyoncé give an interview? Dull, dull, dull! And don’t nobody want to pay $10 to see a dull drag queen.

JuJubee, on the other hand, makes me roll over on the floor every time I see her. I mean, not because she is busted or anything; quite the opposite. Her outfits are always spot on, and she knows how to get a laugh out of you. In one episode, the queens had to do a challenge where they were promoting their autobiography. And JuJubee’s autobiography was called “Memoirs of a Gay … SHA!” Don’t you get it? I mean, she’s AZN. So it’s, like, really funny!

But JuJubee, who deserves to win based on both personality and looks, has been in the bottom a couple times. Unless she really pulls it out of the box tomorrow night, Tyra will take home the crown. JuJubee shares the fate of Ongina, the fabulous contestant from the first season of Drag Race who, in my opinion, should have won. Both are AZN. Both are hilarious. Both have that “it” factor.

So who goes home: the girl who looks the most like RuPaul and brings it every week, but who has the personality of a piece of wood. Or is it the girl who has been stuck in the bottom a couple times, but who knows how to make us laugh, can lip-synch her ass off, and who can “read” a bitch in a heartbeat?

This would be the campiest way to end the season: “Actually, all you bitches are going home. I win my own show. Shantay I stay.”