Drag Me To Hell gets the essence of suburban American horror just right. (Grade: A-) 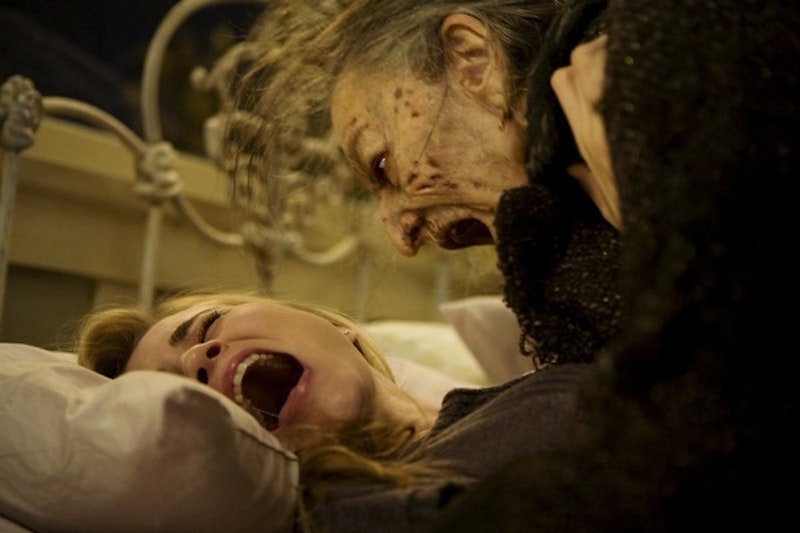 Drag Me To Hell, the first horror movie in 15 years from Spider Man director Sam Raimi, includes wanton gore and gushing bodily fluids worthy of his earlier Evil Dead series, yet its soul is in line with the tamer classics of 50s cheese—movies like The Blob and Invasion of the Body Snatchers. Like those films, Drag Me To Hell’s horror is distinctly suburban; underneath the obvious guttural fear of being eaten by a demon, the real terror in Raimi’s film is protagonist Christine Brown’s (Alison Lohman) inability to ascend the social ladder. We’re frightened because of Raimi’s talent for horrifying set pieces, but it’s the main character’s old-fashioned desire for class stability (and the director's gleeful, anarchic style) that engages us in the first place.

The pulpy title sets the scene, just as the gloriously campy credits and Christopher Young’s storming music hearken back to a psychologically purer era of horror film. We may be watching a contemporary story, but the basic character motivations are right out of suburbia’s early days, as is cinematographer Peter Deming’s washed-out color palette. Christine is a ho-hum loan officer in a ho-hum bank who dreams of attaining the vacant Assistant Manager position that her boss (excellent character actor David Paymer) hasn’t yet filled. She’s in competition with fellow employee and masterful ass-kisser Stu Rubin (Reggie Lee), and is hoping that the promotion will further displace her from her farm-bound upbringing and garner the approval of her rich boyfriend’s (Justin Long) snobby parents.

But right after the boss has asked Christine to show some initiative by making “the tough decisions,” Mrs. Ganush (Lorna Raver), an elderly woman with two outstanding loan extensions, comes into the office to request one more. She begs, literally on her knees, before Christine calls for security and more or less sentences Mrs. Ganush to a life on the street. And, as we know from a prologue in Mexico, Mrs. Ganush is the current carrier of an ancient supernatural curse, meaning that Christine now has a demon following her, trying, indeed, to drag her to hell.

The middle 75 percent of Drag Me To Hell essentially consists of scenes wherein the demon, identified by a seer (Dileep Rao) as the Lamia, psychologically tortures Christine in ways that no one else can see. These scenes are technically extraordinary, as Raimi relies on gross-out sight gags and gratuitous filth as well as eerily quiet moments and sudden camera tricks. Drag Me To Hell is exceptional genre fun and quite scary, and every actor does terrific straight-faced work as the kitsch piles higher and higher. But what truly makes the film work is the fact that Raimi, who co-wrote it with his brother Ivan, sets the whole thing in the blandest possible corridor of American culture. There is nothing interesting about Christine’s life; her workplace and relationship are drawn in the most purely functional terms, just as her essential desire is merely to join the suburban American middle class. The Lamia’s methods are scary enough, but its timing is truly sadistic; the attacks occur right as Christine is, for instance, trying to prove her worth to her boyfriend’s old-money family at dinner. As a last resort, Christine is told that she can give the accursed object, a button from her coat, to someone else as gift. It will get the Lamia out of her hair but condemn this person to an eternity of fire and brimstone torture—a possibility which, given her circumstances, could solve two of her biggest worries at once.

When Raimi’s in gross-out mode—indulging an apparent oral fixation by filling Christine’s mouth at different times with maggots, blood, vomit and pus—his computer effects are undistinguished. But the plainer scenes, particularly those in the perfectly faceless office, are filled with evocative art direction. Drag Me To Hell takes place in a world without advertising, where everyone’s clothes are solid-colored and devoid of logos. And Raimi recreates certain 1950s attitudes subtly in his film—look how the slimy office nemesis Stu Rubin has a stock minority name, but one that would only be threateningly non-mainstream a half-century ago instead of one befitting his Asian ethnicity. And the Mrs. Ganush character is similarly, cartoonish Eastern European; she’s straight from Scary Gypsy central casting, and the use of such a character for thrills is both effective (because Raimi photographs the demon so well) and funny, since we can appreciate the dated horror archetype that Raimi’s playing with in this character.

Drag Me To Hell frightens us with contemporary gore and effects, but it has the sensibility of a different era, one where a heroine can believably want nothing more than access to the middle of the cultural road. This means that, like the best pulp, Drag Me To Hell is inherently optimistic. Invasion of the Body Snatchers, or even The Day The Earth Stood Still, work because their supernatural horrors disrupt a quaint depiction of the noble suburban class, but their very use of that quaint iconography satisfies our desire for a unifying social myth—in this case, of a comfortable, unmessy middle class lifestyle that lower-class citizens can theoretically attain access to. It’s the same duality that animates David Lynch’s suburban-set work, particularly Blue Velvet. We like to see our mainstream’s representatives tortured and humiliated (just look at gossip magazines and early-season episodes of American Idol) but it’s also slyly comforting, in this sprawling, multifaceted culture of subcultures, to be assured there’s a mainstream in the first place.