Nothing Comes from Nothing

A review of Beautiful Losers (Grade: B-) 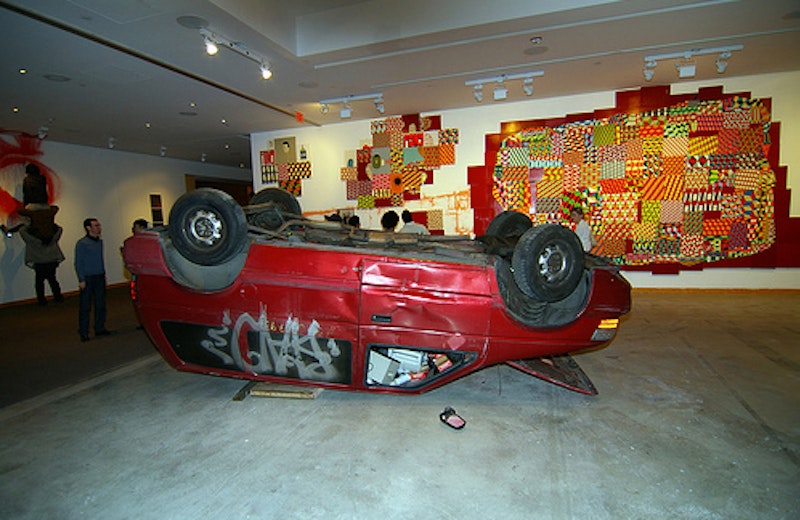 For a long time I’ve had a not-very-serious ambition—usually remembered in idle moments—to take pictures of public restroom graffiti and compile them into a coffee table book. It’s a remarkably direct form of expression, and probably the only place where most people take a moment to think about the fringes of sexuality and politics that find their way into that intimate, yet public, space. A quick Googling shows me I’ve been beaten to it, and though I haven’t looked at Mark Ferem’s book, I am still hung up over questions from my own idly imagined project. What would it mean to commodify these anonymous, throwaway compositions? Would it blunt the edgier ones to collect them into something as conventional as a book, to be displayed in the living room or, even worse, the bathroom? Would one call the phone numbers proffered to ask permission to reprint them?

Related questions hang over Beautiful Losers, a documentary about early-90s “do-it-yourself” underground artists, many of whose work has gone on to receive considerable mainstream attention. These include Shepard Fairey, founder of the OBEY project and designer of the iconic, now infamous, HOPE artwork for the Obama campaign, and Mike Mills, filmmaker and Beastie Boys art designer. Harmony Korine, director of the cult movie Gummo, says that when this loose enclave of artists came together at the Lower East Side’s Alleged Gallery in 1989, “If you were 25 or under, you were fucking weird.”

Interestingly, the “rigorous movement” of skateboarding, as photographer and former professional skater Ed Templeton puts it, was the unifying force among these dispossessed twentysomethings, an activity that drew “heroin addicts and creative people” alike. The two intervening decades make it difficult to remember that, in the suburbs where most of these artists grew up, skateboarding was not yet a professional sport, and saying you did it made it fairly likely you were going to get beaten up. These kids were different, the voiceover interviews keep saying, their anger at being marooned in the suburbs by failed families and failed schools making them gravitate to the fringe. Korine, standing in a children’s park in the California suburb where he grew up, tells the story of a skater kid he knew from school being gruesomely murdered by addicts in the same, sunny park. You see, these people see the world differently than we do, no matter who the “we” of the audience happens to be. Korine repeats the story to a little girl playing behind him, to which she says, “Cool!” That puts things in perspective.

The innocence of this underground movement’s beginnings is the somewhat belabored focus of the documentary’s first half—Shepard Fairey, for example, started making T-shirt designs simply because there were not yet any punk stores around. There was no manifesto, not even a unified movement to speak of. When the film’s director, Aaron Rose, opened the Alleged Gallery on Ludlow Street, his motivation was to have a space where his friends could have parties with their art on the walls, a place to “be less bored.” Clearly this innocence is gone—I figure it left sometime between graffiti artist Barry McGee’s first major gallery show and Mike Mills’s directing now-iconic Nike and Gap commercials (“Are you a Jean or a Khaki?”). As I watched Beautiful Losers, I began to wonder if the film itself wasn’t a part of the process of mainstreaming, of the historicizing of hipsters, the beginnings of the same process for skate punks and graffiti artists that has moved beatniks and hippies into the center of post-war American popular culture. Unfortunately, thanks to Judd Apatow and Kevin Smith, the story of the alienation of suburban, flannel-clad, overgrown kids has long since lost its teeth.

That said, the artists in Beautiful Losers do grow up, and the film is at its best during their meditations on coming to the center of the art world. Ed Templeton and Stephen Powers, against footage of their first exhibitions in Liverpool and Paris, respectively, argue that bigger shows is part of the process of expanding their community, of actually making a living by their art. Barry McGee, who has had major street art exhibitions in the US and Japan, wearily argues the opposite point, lending a nice sense of ambiguity to this stage in their careers. Rose’s tossed-off observation about mainstream success—“Yeah, it’s definitely not just for kids anymore”—nearly derails the film's thematic complexity. My favorite scene has Rose, sitting in a carefully-chosen graffitied doorway and saying something self-aggrandizing about the Alleged Gallery period, being made to stand up and move out of the way when someone walks out of the door halfway through the shot. A short archival scene in which McGee and his partner, Margaret Kilgallen, walk the viewer through a train-yard, effectively curating several decades of graffiti, is the most unaffected and involving sequence in the whole film. Kilgallen’s untimely death in 2001 lends a sense of pathos to the movie’s last act. For a moment; it’s affecting, but this solemn unnarrated sequence goes on for so long it seems the filmmakers aren’t sharing their grief with the audience anymore, but merely tending to their own needs.

Despite the engaging work it takes as its subject (Templeton’s photographs and McGee’s graffiti are particularly brilliant), Beautiful Losers never overcomes its own conventionality and seriousness. As such, it isn’t the best vehicle for art that is abrasive, vital and often very funny. The jangly score by Beastie Boys collaborator Money Mark is stuck in the elevator, never assertive enough for the era of the Pixies and early Public Enemy. Funnily enough, the mention of the Beastie Boys in the credits (the movie’s distributor, Oscilloscope Laboratories, was founded by Adam Yauch) is as close to diversity this distinctly Caucasian street art documentary gets. Geoff McFetridge’s titles are too reminiscent of the simple animations intercut with “gritty” urban footage of early The Real World, but his animations peppered throughout the movie are often quite interesting. The art itself fights to get to the surface of Rose’s overly linear narrative, its messy energy subsumed by energies that are more self-congratulating than celebratory. Sometimes liberatingly childish, often stuck in high school modes of thinking, the filmmakers end up highlighting the sameness in stories of artists’ need for self-determination, a narrative that last year’s documentary Man On Wire shows can be breathtaking despite its familiarity. For a documentary about art that began on the slim edge of legality and poverty, Beautiful Losers feels too safe.

Beautiful Losers is out this week from Oscilloscope Laboratories (DVD, $29.99). Bonus features include clips from Beautiful Losers DIY art workshops with school kids around the country.