With Defiance, Daniel Craig solidifies his status as the best fake-Jewish ass-kicker in Hollywood. (Grade: B-) 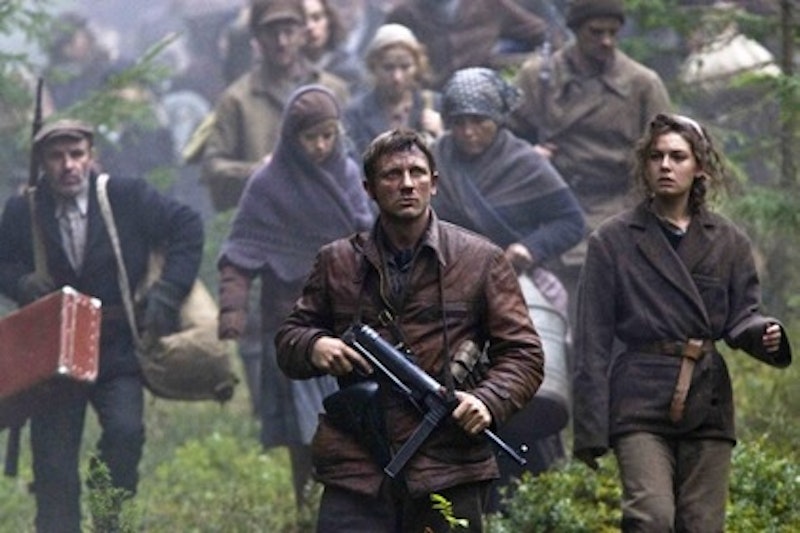 Is it a practical joke on Jewish people everywhere that Daniel Craig, a grimly Teutonic-looking blond Englishman, is the reigning purveyor of righteous Jewish vigilantism in Hollywood? Or is it a gift to all Jews that an actor this intense and watchable has become our own in-house Charles Bronson? In Munich, and now in Edward Zwick’s WWII film Defiance, Craig plays a bloodthirsty Mossad soldier and the famous Belarusian resistance fighter Tuvia Bielski, respectively. And while he’s never quite physically convincing as either, Craig is rarely less than fascinating to watch while onscreen. Often compared to Steve McQueen, Craig strikes me more as a mixture of Alain Delon and Joe Lieberman, his fleshy face held together by a tightly composed, humorless grimace; when he smiles, however infrequently, it looks like a momentary, unnatural slackening that’s never held for long before being snapped back into fighting position. But there’s still a smoldering intensity in that stare, an implication that however unenjoyable a character’s charge may be, it’s the product of true duty. Craig makes murder and hand-to-hand combat seem like grunt work, which is why he’s able to imbue his characters, whether cultural/historical heroes or James Bond, with the same workmanlike, blue-collar attitude.

He’s therefore a fine match for this relatively subdued Zwick film. For two decades, Zwick has been our country’s foremost manufacturer of technically sturdy, defiantly earnest historical action-dramas—films like Glory, Courage Under Fire, and The Last Samurai. His last film, 2006’s Blood Diamond, was a continent-wide exploration of the African gem industry that perhaps bit off a little more than it could chew thematically, but like all of Zwick’s movies, it was agreeably slick mainstream entertainment that awkwardly split the difference between easy moralizing and gun fights. The trend continues in Defiance, which details the Bielski brothers’ (Jamie Bell, George Mackay and Liev Schreiber form an unlikely-looking family with Craig) makeshift Jewish hideout in the deep Central European woods that eventually grew into a 1200-person village by the war’s end. Like any Zwick production (he also co-wrote the script), it’s a well-made dose of wartime action sequences dressed in quasi-informative historical clothes. As in all of his films, we’re left wondering why, since the story is so incredible, Zwick seems most intent on blowing us away with explosives

During Defiance’s best moments, I found myself appreciating Zwick’s place in a certain unpretentious lineage—he makes war films, plain and simple, and they’re impressively staged ones for our current CGI-infested film landscape. But he sours this goodwill by being so consistently pretentious; his production values, A-list casts, and willing embrace of hyper-sincere melodrama wherever possible speak to Zwick’s painfully middlebrow Oscar aspirations, and each of his films accordingly contain innumerable groan-worthy narrative clichés. In Defiance, he gives more screen time to the violent brotherly competitions between Tuvia and Zus (Schreiber) than to the greater conflict that frames their cultural achievement. In other words, Zwick manages to tell a potentially clichéd story about anti-Nazi resistance by positioning it amidst an even more clichéd story of sibling rivalry. The ultimate victory in Defiance’s story is the brothers’ reconciliation to fight one last slow-motion battle against the faceless Germans, while the years-long subsequent growth of the Bielski camp gets tacked on as an end title card.

Zwick’s films are too pretentious and long to satisfy as gun-loaded historical pulp, and too meat-headed to truly address the moral implications of his chosen settings. Defiance, despite Zwick’s claim that it represents some deep personal expression, is successful precisely because it’s (relatively) streamlined. And with a no-nonsense worker like Daniel Craig in the lead, we’re saved from Academy-baiting spectacle like Cruise learning the way of the sword in The Last Samurai or Leo gasping for his final, perfectly-accented breaths in Blood Diamond. Craig’s own accent comes and goes throughout Defiance; at times he sounds nearly Irish. But that’s no problem when a character does as little talking as he does here—as always, it’s the stare, the quick reflexes, that do the real talking.

So why doesn’t Craig yet have his proper directorial foil? Delon did his most enduring action work with Jean-Pierre Melville, who put his nearly emotionless mug to good use in Le Samurai and Le Cercle Rouge. Like Zwick, Melville was an arch technician, sometimes painfully so, but he never succumbed to the former’s stylistic blandness. Melville’s every shot was perfectly calibrated, but he never went for the cheap stunt or the easy dramatic twist. If anything, Le Cercle Rouge and his own WW2 resistance film, Army of Shadows, suffer from an excessive focus on their characters’ workaday routines. The excitement of those films doesn’t stem from the anti-German espionage or the climactic jewel heist but from the studious, methodical chronicling of the central characters’ plots. We learn, for instance, the way to make a spherical bullet in a basement using a Bunsen burner and a spoon, and we therefore understand through his work what a for-hire sniper’s life is really like.

Craig has this intensity in him; with the right director he could be this economically expressive. And to his credit, he comes close in the Bond films. But when a director like Edward Zwick is Hollywood’s most decorated thriller director, there’s little room for a star like Craig to grow.