But Anson Mount sure is good looking. 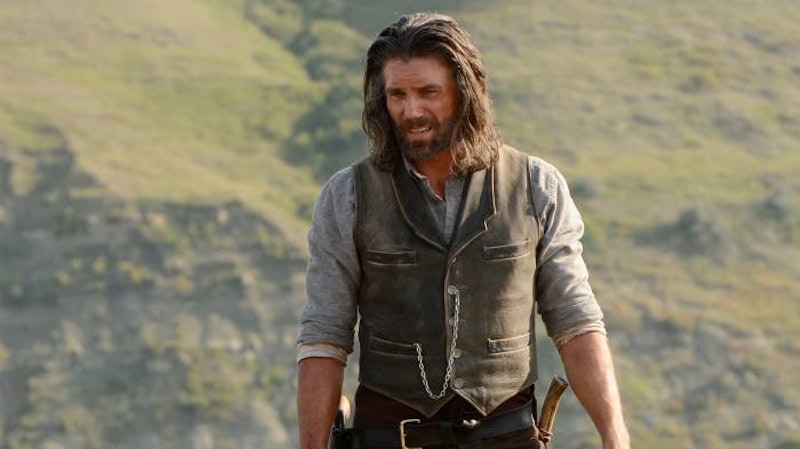 After watching the first two seasons of AMC's Old West drama Hell on Wheels last weekend, it's obvious that the show does two things very well when it tries. It hints at the moral darkness of post-Civil War, frontier America: lynchings, stage coach robberies and outlaw justice, Confederate resentment, Indian massacres, the desperate plight of Irish immigrants, the horrific toll of America's manifest destiny and capitalist industry. They may just be backdrops for a mostly lazy character drama, but they're there and when the show brings them front and center it makes for rich historical drama. More impressively though, it has scenes of hallucinatory brilliance: late in season two, for example, when the mad Swede is dancing through the streets of the burning railroad camp, this is HoW at its absolute best. Unfortunately, these scenes are few and far between, and generally the show is little more than a pale homage to Westerns past: stark prairie landscapes and tough, whiskey-swilling men. Throw in a beautiful, English damsel—Lily Bell, the "Fair-Haired Maiden of the West"—and this show pretty much writes itself.

Anson Mount does a fine job as Cullen Bohannon, a former Confederate soldier who lost more than just his family in the war. He's ruggedly handsome with a loner's charm, managing to escape every impossible situation he's confronted with, and when he's partnered up with rapper-turned-actor Common—playing slave-turned-railroad man Elam Ferguson—the show really hits its stride: their uneasy friendship is as close as HoW gets to well-written character dynamics. Most of the other characters on HoW fall flat, including Colm Meaney as Thomas Durant, a ruthless railroad tycoon, and Eddie Spears as Joseph Black Moon, son of a Cheyenne chief who's taken up Christianity and been "civilized," as Durant would say.

Many critics have said that HoW is Deadwood lite, which is pretty generous considering how uncompromisingly brilliant Deadwood was. HoW manages a sort of easy-going watchability with a thoroughly bleak outlook and while I give them props for some unexpected twists—the season two finale manages to avoid the Bohannon-Bell love story in spectacular, if nonsensical, fashion—I'd be hard-pressed to think of a show where less happens over the course of 20 episodes. Sure there are some minor character dilemmas. Reverend Cole becomes a drunken madman who'll stop at nothing to avoid another Trail of Tears. The Swede, originally tasked by Durant with railroad security, is, by season two, a mere "Shakespearean fool," and later, the show's most unexpected villain. But for the most part HoW manages a sort of pre-packaged status quo and I guess we're supposed to find Anson Mount's stern good looks a worthy stand-in for interesting story lines and well-developed characters. The only blessing here is that AMC's recent decision to move the show to Saturday nights means this upcoming season will almost certainly be its last, and the show can finish out in graceful mediocrity.