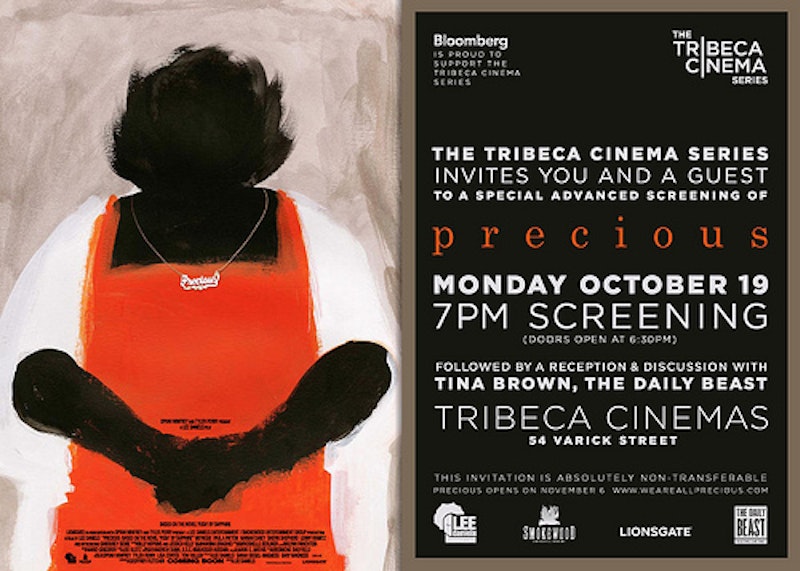 Precious has arrived! For anyone following the film world, the push for Precious, at first titled Push, began months ago, in the beginning of the year. It has been a long haul. Some of us are tired.

Now it is here and is bound for Oscar greatness, unless you take Armond White seriously. Precious is brilliant and moving, entertaining and important; you should see it, and keep your eyes on Mo'Nique. While there might be some backlash as a result of the Oprah and Tyler Perry hype, I imagine critics will still lavish it with enough praise to carry it to the Academy Awards in fine shape.

Back to Armond White. White, the enfant terrible of film criticism, finds in Precious a kind of bamboozle. White:

"Not since The Birth of a Nation has a mainstream movie demeaned the idea of black American life as much as Precious. Full of brazenly racist clichés (Precious steals and eats an entire bucket of fried chicken), it is a sociological horror show. Offering racist hysteria masquerading as social sensitivity, it’s been acclaimed on the international festival circuit that usually disdains movies about black Americans as somehow inartistic and unworthy."

White wants to revise black film history to include lowbrow schlock that nonetheless portrays black people as happy deviants, not real deviants—or something like that. The truth is his argument isn't very good. His criticism of Precious is old and predictable, even though he masks it under the guise of going against the mainstream.

The truth: Precious is just one film in a long history of black movies that go against "responsible" images of black people.

The tradition of portraying black life as raw, honest, bleak or resistant really began in earnest in the 1960s. According to Donald Bogle, author of the classic review of black cinema, Toms, Coons, Mulattoes, Mammies, and Bucks, writes that the 60s brought a challenge to assimilationist and watered-down stories: "No longer were sad-eyed black people trying to prove their worth in order to fit into white worlds. No longer were submissive, patient Negroes pleading for acceptance. Instead, the headstrong militants appeared."

Bogle documents a lengthy history of 60s cinema, from the relatively reserved Raisin in the Sun (1961), with its sober portrayal of black anger at injustice, to the more openly radical Up Tight (1968) and Slaves (1969), both depicting revolution, modern and historical.

Yet it's the 1970s that was commonly thought to change black cinema, and no one gets more credit than Melvin Van Peebles and Sweet Sweetback's Baadasssss Song. In truth, Van Peebles has done other, subtler movies, like the complex and fascinating La Permission (Story of a Three-Day Pass), but Sweet Sweetback is so shocking—even today—it absorbs the lion's share of his acclaim. Van Peebles' depiction of the renegade black men, violent and sexual but noble still, resonated with black audiences—male and female—who wanted an image of themselves as active and resistant. Blaxploitation films with female leads like Pam Grier as Foxy Brown provided similar catharsis. The 1970s were a fruitful time for black cinema, too vast for an essay this short.

Still, blaxploitation was fantasy, escapism. It provided an image of black America that, while feasible under some circumstances, was difficult to sustain.

Resistant images took on new forms in 1980s, though perhaps some would characterize it as a lull. Yet it impossible to talk about Precious without noting The Color Purple. Purple's Celie is in many ways the 1980s equivalent of Precious. Like Precious, Celie is a victim of rape, impregnated by her father at a very young age. The movie delves into the dysfunctions of black families in ways that have "similarities … to past films that have portrayed black people disparagingly," Jacqueline Bobo writes in Black women as cultural readers. Yet, for all the criticism levied on the film, black audiences, particularly black women, according to Bobo, identified with the film's characters. Showing black people, and really black women, as survivors, even when it doesn't look "nice" to the rest of America, was a ballsy challenge.

Then we got Spike Lee. Now the most celebrated black filmmaker living today, perhaps ever, Lee began his career with a small movie about a black woman looking to take control of her love life in She's Gotta Have It. The film has admirers and detractors, but it can be said that no film like it ever preceded it. In some ways the anti-Color Purple, it shares with that film a certain in-group dialogue, the idea that this story is about black people managing their own lives.

But it’s Do the Right Thing, inaugurating a second moment of revolutionary black films that gets credit for upsetting norms and challenging the status quo. As much controversy as the film engendered, its popularity within the black community again stems from its defiance, both in the way it is shot and the narrative it tells. Yes, this was "black people behaving badly," and it wasn't supposed to make white people or upstanding black people feel comfortable (though the bourgeois really like it), but it is nonetheless remarkable in its daring. (And, in my opinion, more ambivalent and nuanced in its ending than it gets credit for).

The hood movies are the early 1990s and the Spike Lee's Bamboozled—again, controversial—took up, with varying degrees of artistry, where Do the Right Thing left off. These films are recent enough to need to no explanation. Now there are whole host of films—and I'm not talking Tyler Perry—which embarrass and upset the black bourgeois.

Despite Armond White's insistence that Precious will destroy either the pristine image of the downtrodden-but-noble black person in the eyes of white liberal America or stoke the fires of bigotry in the eyes of conservatives, the truth is the long history of black cinema, which I've only touched on here, has done that many times before. And it will do it again. It is an important political and artistic project and, really, in the end, wouldn't we be bored otherwise?