Even the Worst Deserve Their Dignity

At the Death House Door tackles a contentious issue with grace and artfulness. (Grade: A) 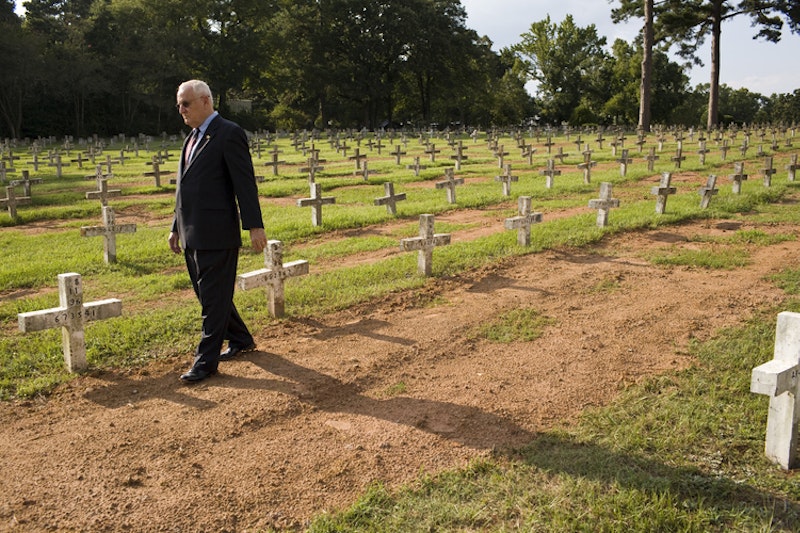 Carroll Pickett, walking the prison cemetery where he worked for 15 years.

Directors Peter Gilbert and Steve James only acknowledge politics one time in their otherwise masterful, even-handed documentary At the Death House Door, out on DVD this week. During a section on Huntsville, TX, where more state executions happen than any other place in America, the filmmakers cut to a clip of then-governor George W. Bush explaining his confidence that only “the worst of the worst” criminals are being lethally injected. It’s subtle and quick, but still unnecessary; Bush isn’t the only governor, from Texas or otherwise, to authorize the continuation of this barbaric practice, but his face certainly riles kneejerk anger like few others. Outside of this small transgression, however, At the Death House Door is an invaluable, poignant document about the realities of capital punishment in the United States, and more so for recognizing that the issue transcends politics.

Two stories are told in Death House, and they are so skillfully woven together that, even at only 98 minutes, the film never feels rushed. The first is that of Carroll Pickett, a former prison chaplain from Texas who was present for 95 state executions over 15 years. At the time, inmates were usually executed around midnight, and Pickett would often be with them for the preceding 12 to 18 hours, saying prayers, sharing their final meal, and finally resting his hand on their leg and looking them in the eye as the injections were administered. Being a buttoned-up son of a conservative father, Pickett never felt comfortable shedding tears over these heartbreaking scenes, and instead he went home every time and recorded a running, unedited monologue into a cassette player, storing all the tapes in a half-dozen or so suitcase-sized carrying cases. He never listened to any of these tapes again, nor did he even mention their existence to his four children, but Gilbert and James provide a few samples from them and the contents is devastating. Here is a man, a devoted Christian, grappling with his complicity in an act that, perhaps paradoxically, he doesn’t believe is fair. “The system’s broke, but no man should die alone without a friend,” Pickett says in the interviews, and his ongoing, stoic embodiment of this sentiment forms one of the most touching defenses of Christian morality I’ve seen in a film.

Simultaneously, Death House follows two Chicago Tribune reporters, Maury Possley and Steve Mills, who in 2006 investigate the 1989 execution of Carlos De Luna. They discover that De Luna was in fact innocent of the murder he’d been sentenced for, and they break the news to his sister, Rose, who is subsequently emboldened to join anti-death penalty groups and lend her story to the cause. About a third of the way through, we learn (unsurprisingly, but still affectingly) that De Luna was helped to the lethal injection table by Carroll Pickett, and that Pickett’s belief in De Luna’s innocence was among the most powerful catalysts for his eventual hardening into a full-fledge anti-death penalty crusader. It is in fact Pickett, to whom she is introduced by the filmmakers, that convinces Rose to join his campaign against capital punishment.

The effect of these overlapping stories could be maudlin or crassly heartrending, but it’s anything but. This is largely because Pickett and Rose are both so averse to self-pity; as protagonists in an awful human drama, they are compelling without seeming desperate for our sympathies. Were a narrative film to be made from this story, with actors attempting to find their way into the emotional states of these characters, it couldn’t be so powerful; ironically, it’s the fact-based documentary medium that displays the stories’ incredible sincerity and wrenching humanity without coming off as manipulative. Dead Man Walking, beautiful film that it is, was criticized by many as being too polemical, a charge that no feeling person could level at Gilbert and James’ effort. There is no hint of self-righteousness in sight.

While At the Death House Door tackles capital punishment, its actual themes are more emotionally broad. This is a film about compassion, human dignity, and allegiance to causes that transcend one’s own life. Pickett helped 95 men to a death that he felt was unjust, yet he rightly explains (not justifies) this participation by acknowledging that the executions would have happened whether or not he abstained for moral reasons. Recalling a night when protesters and death penalty advocates alike flooded the Huntington jail, he says he felt like saying, “Go home. This is going to happen whether you’re here or not. Let us do this in dignity and peace.” This isn’t a call for complacency, as his continuing work in opposition to capital punishment shows. Rather, it’s a call for appropriate recognition of what this act entails. Screaming and picketing won’t stop a man from dying, but holding his hand, offering a chance to exit the world with a loving presence in the room, can perhaps ease someone’s final hours. Particularly if that person knows they’re going to die without reason.

Not all death row inmates are innocent, of course, but a single case like De Luna’s should convince anyone that the policy is outmoded and cruel. Should it not, Gilbert and James show Pickett giving his standard talk at different venues, some friendly, some hostile. He reiterates the well-known, yet still salient, fact that black prisoners outnumber white ones to an incredible degree on death row. He explains that the chemical used in lethal injection was originally used to terminate livestock but has since been banned due to the unbearable pain it inflicts on animals. And he explains that, far from experiencing a swift, humane death, the average inmate takes nearly 11 minutes to die after the injections. Most astonishingly, he punctures the myth that capital punishment is a deterrent to possible criminals; when he began as a prison chaplain, only 48 men were on Texas’s death row, while nearly 400 are listed now. He might also have mentioned that the United States remains the only developed country to employ this awful practice, or the ridiculousness in allowing the same crime to yield vastly different sentences from state to state, but the filmmakers don’t show it if he did.

Capital punishment advocates stress toughness on crime, though I find that opposition to it is often the tougher choice, and the more socially conscious one at that. It benefits everyone to look at “the worst of the worst” and remember that they are still people, just as the juries, judges, and government bodies who impose and decide this sentence are just people, too, and therefore capable of misjudgment, prejudice, and false retribution. This has little to do with politics, although the issue is managed politically. Rather, opposition to the death penalty requires merely an acknowledgement of intrinsic human weakness and dignity, which may be why a thoughtful consideration of the issue like At the Death House Door makes for such stirring, beautiful art.

At the Death House Door, directed by Peter Gilbert and Steve James. Kartemquin Films and IFC, 98 min., not rated. Out now on DVD.