Director Danny Boyle's engaging—if sometimes manic—take on a the stay-tough-and-survive story of the decade, 127 Hours. Grade: B+ 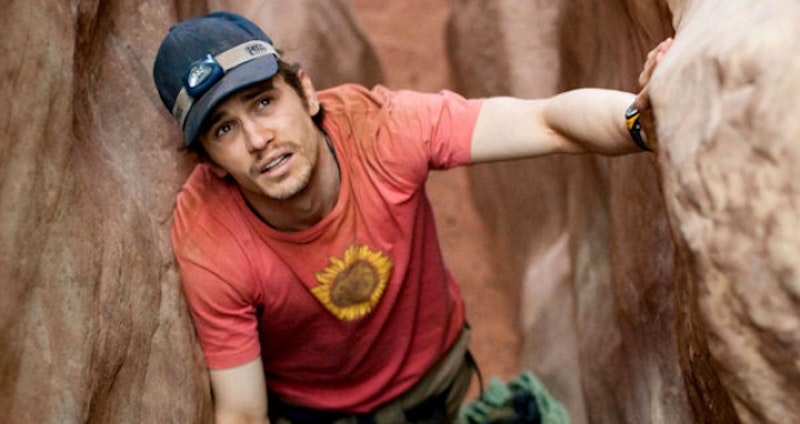 In its title alone, 127 Hours defiantly announces how long we can expect the hero to be pinned against a rock, and that kind of confrontational bluntness is a pretty good primer for the movie in general. This intense, antic take on the now-hallowed story of a man who chopped through his own arm to reach freedom unfolds as an untethered descent into the manic scenario, zooming in and out of the subject’s mind and, eventually, in and out of his arm as he scrapes at the bone.

The batty hero is Aron Ralston (James Franco), the adventurer who spent five days trapped by a fallen boulder in the Utah desert, and who, somewhat freakishly, went on to become a media darling and the subject of at least one Miller Lite commercial. Ralston later penned a hardcover account of his unimaginable struggle, Between a Rock and a Hard Place, which provides the basis for the movie. Occasionally riveting, the book is almost comically literal-minded in some passages, bleeding with boldface detail. Ralston, on his thirst: “unslakable … unquenchable … unsatisfiable … insuppressible … inexistinguishable.” There is subsequent comment on how much he wanted a margarita. The publisher contracted to Ralston to recount his experience, one imagines, and so that’s precisely what he did.

Watching the movie, it’s clear that director Danny Boyle’s chief fidelity is to Ralston’s elemental struggle, not his more banal horrors. The director of brash, often frenzied movies like Trainspotting, 28 Days Later and, most recently, Slumdog Millionaire, Boyle proves to be an ingenious (if also somewhat questionable) hire for this material because of how blithely he rejects the idea that a movie about a guy pinned to a rock needs to be about a guy pinned to a rock. That doesn’t even seem to have occurred to him. Under his cracked tutelage, the camera soars through canyons and beyond, and the picture is often split into two screens or more, probably because he simply couldn’t contain himself.

The photography (by Enrique Chediak and Anthony Dod Mantle) is nothing short of epic, bringing exuberant technical muscle to the movie’s mad spirit and moods. Boyle totally laps it up. The movie is gorgeous, frantic, hungry. Boyle seems at once intoxicated by the adventure and frightened by the existential tenor the story inevitably takes on after the accident, and his gospel is infectious.

For that matter, Franco’s turn as Ralston proves a gonzo triumph. The movie’s strongest sequences home in on Ralston as he realizes he’s likely about to die, as the reality of his predicament descends into delirium and dark self-reflection. There are elegiac images of a former lover, flashes of unreturned phone calls, ecstatic fantasies of rainfall. Franco channels this wayward struggle with equal dread and cheer, working his way through Ralston’s unknowable psyche. Franco’s sometimes charming, sometimes jarring bid at pop-culture domination over the past couple of years  (soap operas, poetry, multiple graduate programs) has won him fans and many puzzled observers, but if doubts lingered about his ability to hold the screen, they’re now in the past.

Still, 127 Hours gives off some uneasy vibes when we recall that this is, after all, a fairly simple story of how Ralston’s cheerful arrogance as an outdoorsman nearly did him in. Unlike the relentlessly extroverted Slumdog, for example, 127 Hours feeds on the internal struggle of its hero for much of the action, and Boyle’s formal showmanship often doesn’t make sense for what’s actually on screen. He leaves us at once grateful a more literal-minded filmmaker wasn’t on duty and dubious that his flamboyant visual sense is actually warranted in the later scenes.

And so the movie, ultimately, is harrowing less for the infamous amputation scene than for the free-for-all visual assault hurled at us from the first frame. That seems a little warped. Perhaps warped for the best? A hand less deft and fussy than Boyle’s might have made for a more cathartic emotional experience, a more authentic trauma, but then it’s hard to imagine a more adroit, playful, robustly entertaining movie in the end. It’s a tradeoff that’s easy to get behind.

Note: As to the hysteria over the actual scene where the arm comes off, you’ll be fine. There have been reports that audience members have fainted, but once again, Boyle’s busy camera ensures we never see too much at once.