A Movie Built on Sand

Prince of Persia is an unabashed summer blockbuster that refuses to weigh itself down with redeeming dialogue or decent acting. 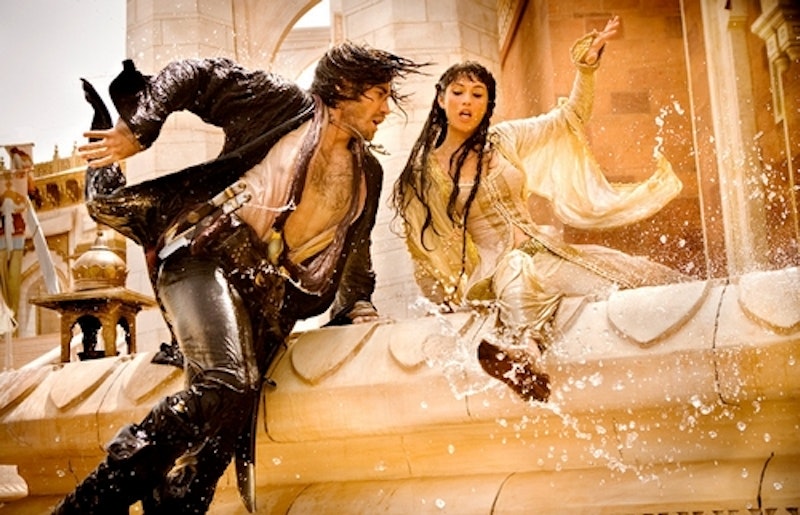 Prince of Persia is a derivative, malformed mess, with a plot that’s preposterous and tediously predictable. Jake Gyllenhaal is largely wasted as Prince Dastin, a role which requires him to alternate between looking raffishly earnest and earnestly raffish. Gemma Arteton as Princess Tamina does her best Princess Leia impersonation, and succeeds in demonstrating that she is significantly less sexy than Carrie Fisher. The super-special mystic knife appears to have been purchased from Toys"R"Us, and a troop of dark riders has been shamelessly borrowed from the Lord of the Rings films. Except these Dark Riders aren’t called Nazgul. They’re called “Hashashins.” Which, in ancient Persian means, “Assassins who lisp.”

So, okay, it’s true—this is a big, dumb, Hollywood action-adventure vehicle with nothing in its head except things blowing up, sword fights and pretty actors staring soulfully into each others eyes for a moment before more things blow up.

I’m okay with that. Prince of Persia has no lofty ambitions and virtually no pretensions; it isn’t an ironically clever action movie, or a thoughtful action movie, or anything but a breezy summer stunt fest. And within those boundaries, it’s surprisingly decent. Gyllenhaal has charisma to burn, and he leaps from battle to dashing close-up to battle with winning ease. He has no chemistry with Gemma Arteton, but then, they hardly have any love scenes. The sword fights are well choreographed, and many of the set pieces are entertaining and creative. One of the highlights is early in the film, when Dastin scales a wall using crossbow bolts fired just ahead of his ascent by his retainers.

Moreover, the writing is surprisingly good, in a workmanlike way. The opening scene explains Prince Dastin’s background (he’s a street urchin adopted by the king) in a burst of action-filled exposition that’s as professionally efficient an origin story as I think I’ve seen on film. The close relationship between the king (Ronald Pickup) and Dastin is only developed in a couple of scenes, but Gyllenhaal sells it; he looks genuinely stricken at his father’s death, and you feel throughout the film that he is motivated by the king’s memory. The dialogue for ostrich-racer, small-time thu, and anti-tax activist Sheik Amar (Alfred Molina) is even witty. A heartfelt lament in which Amar declares his determination to keep a close watch on a suicidal ostrich lest she “do something stupid” is, for example, laugh-out-loud funny—and his embrace of said suicidal ostrich is certainly the movie’s romantic high point.

I think my favorite part of the film, though, is the ending.  [Warning: spoilers follow.]

Prince of Persia’s denouement involves the mystical turning back of the clock practically to the film’s beginning, effectively erasing the entire action of the movie. Dastin foils the villain even before his plot can begin, and every meaningful moment in the narrative ruthlessly disappears. The king doesn’t die. Dastin’s brothers, both of whom were murdered in his arms at a moment of reconciliation, don’t die either. The honorable black sidekick doesn’t inexplicably sacrifice his life for the stupid lighter-skinned peoples. Sheik Amar doesn’t bow to the remorseless logic of lovable rogues and show an inner nobility. The Princess doesn’t fall in love with Dastin, nor does she sacrifice herself for him and the world (though Dastin gets to court and marry her anyway). In short, nothing happens. You get the happy ending without any of the events leading to it.

Which seems perfectly reasonable. I mean, I liked the king; I don’t want him to get killed. The brothers were fun too; I don’t need to see them offed. And lord knows I really, really don’t want to see the honorable black sidekick do that thing that all the black sidekicks have to do. Why not just wipe it out? It’s all just a fluffy fantasy anyway. It kept me cheerfully entertained for two hours. It wasn’t real, it had nothing to say, it’s over and there are no consequences to speak of. Would that all Hollywood action movies were equally forthright.